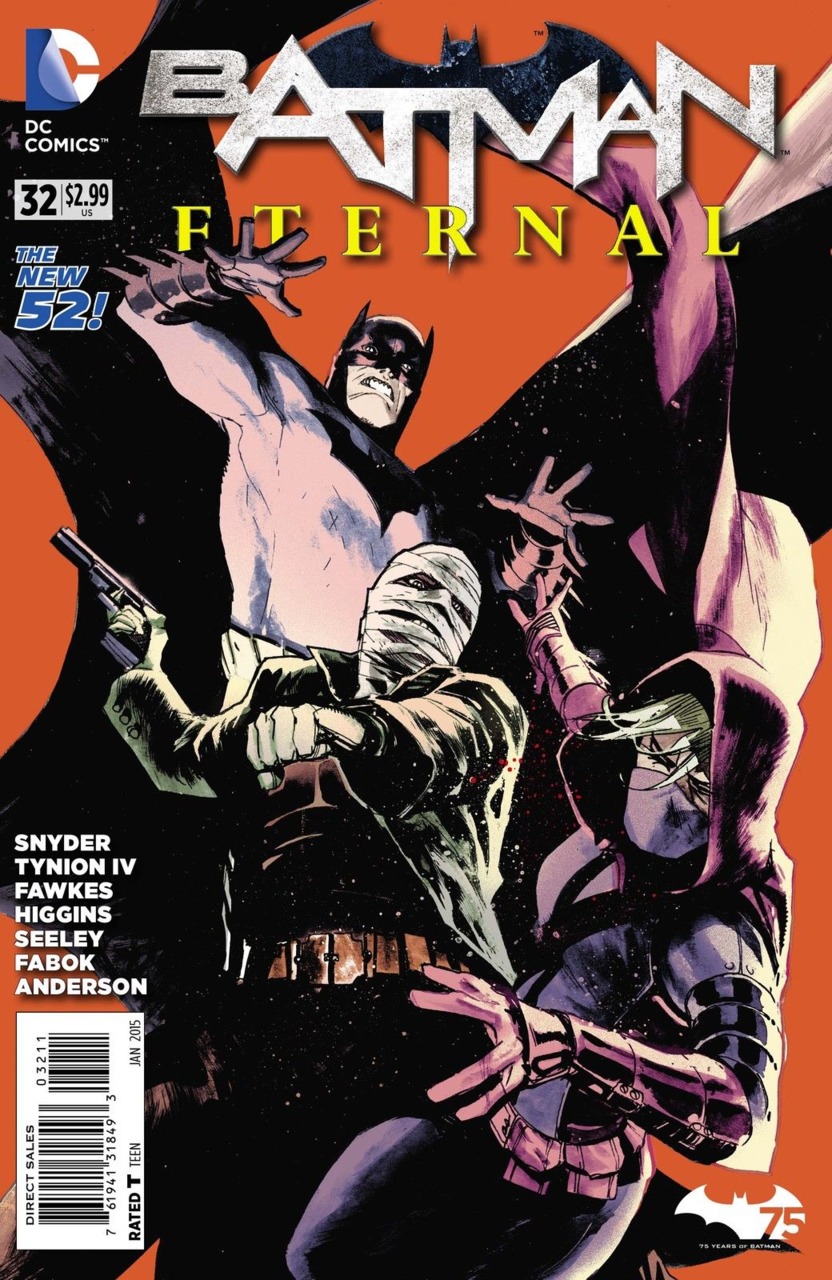 Well, if you ask me this issue is a major improvement over what we have been getting recently. Kyle Higgins is on script duties this week, and Jason Fabok is on art. Higgins delivers one of the most exciting, well-rounded issues of the series. I was also surprised to see Fabok’s art in Eternal this late, considering he’ll be joining Justice League next week.

One thing that I love about Fabok’s art, is the variety. Everyone is unique, and he draws varying body shapes along with it. It’s so detailed, and clean looking, and I’m so surprised that he’s able to churn out great art as quickly as he does.

We pick up where we left off last week, with Spoiler trapped in an alley with Hush. She defends herself, but also ends up getting hurt in the process. She’s about to get shot, when Batman arrives, and begins to fight Hush. They trade blows until Spoiler appears, and Hush lobs a grenade at her. Batman saves her, but he loses Hush in the process.

So, now that Batman has nothing better to do, he might as well go save Luke, right?… Right?! He also swings by and picks up Alfred and brings him home to be with his daughter.

Jason Bard is hobbling his way up to the rooftop to meet up with Hush. Hush gives him some papers, and tells him to get this information out ASAP. So Bard tells Vicki Vale. No greater way to spread the word.

Bruce is checking up on Luke’s armor. Something seems to be wrong with it. In the meantime, he’s giving Luke some time off (hopefully it’s PAID time off). Bruce sees that a data cache has been accessed, but it needs either his, or Alfred’s DNA. And the last time it was brought up was the night Hush broke in… Bruce rushes to the Batplane, but we see it’s too late.

Hush uses a sample of Alfred’s blood to access the cache, and we see what the papers he gave Bard were… Bunkers for Wayne Tech weapons. We then see the militia patrolling the streets informing everyone that curfew is beginning, and that they need to get home. Just as they pass a public phone, the booth explodes, leaving crippled bodies behind. As the picture zooms in, we see a single Batarang laying on top of the rubble. Marketing gone wrong…

This issue was so great! Higgins nailed it this issue, and Fabok certainly didn’t hurt either.