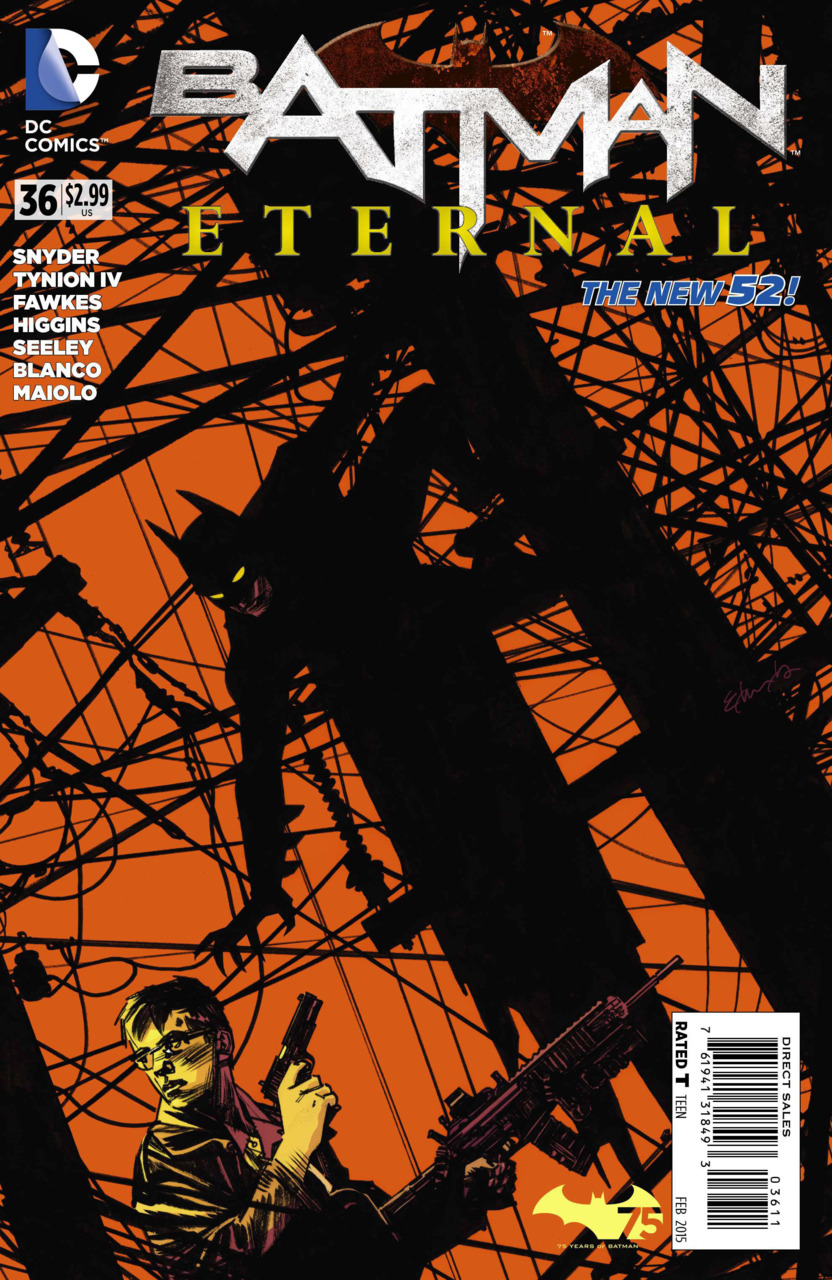 James Tynion is still delivering solid scripts to each of his issues to Batman Eternal. I feel like the whole team is getting stronger, though. And that is so awesome for this series.

Fernando Blanco does the art again this issue, and I really like what this guy is doing  its nothing flashy, but it tells the story very well  the guy has a bright future ahead of him. If get this guy on a monthly in a second.

Harper has a heart to heart with an unconscious Cullen, and then meets up with Tim, who says that Batman needs them.

Batman is currently in a free fall off of Wayne Tower. When Julia realizes a code that allows Batman to escape just in time. However, the cops don’t know that, and Bullock and the rest are disgusted with Bard. Bard calls Vicki to gloat, but she has realized what he’s up to thanks to bartender – Frank. She dumps him, just in time for Batman to serve justice with a swift punch to the face. Bard blames Batman for his past girlfriend and partner’s death. However, the tables have turned. Batman points out to him that because he was chasing him around instead of doing his job, several people in Gotham have died. Bard pulls a gun on him, and tells him he’s under arrest. But he is surrounded by the Bat-family. They threaten to lock him up, unless he straightens out; giving him one last chance, and they vanish.

Everyone meets back at the cave, and Batman goes him to talk to Hush. Hush mocks him, telling him how he can’t just go buy a new car now, and Batman goes to beat him, but is stopped by Julia. Hush pushes his luck by making a crack at Alfred, WHEN JULIA SHOOTS HIM… Don’t worry. It was only a tranquilizer. She tells Batman he can beat him all he wants – just don’t do it agains the glass. She doesn’t want to make an escape a possibility.

Batman tells the team that everything that has happened is connected somehow, and they need to figure it out. He also gives Julia the rest of the night off, as he begins to do some research. Just as Hush is getting sleepy, he mocks Batman. Saying he gave him the best seat in the house, watching him go insane trying to figure out who is behind all of this…

As we see the Riddler who has all the pictures of all the players so far, saying how Batman needs a little push.

Another twist in the direction of this story, and we kinda saw this coming. But it makes sense, and it still doesn’t really answer our question. Riddler could still be just another pawn. Riddler did say “Batman” and not “Bruce”, as our ending showed he knows who Batman is. He could figure it out… He is the Riddler after all. But the only other villains who know of his identity in the New 52 are Hush, who is locked away… Could escape later, though… And Lincoln March – who we haven’t seen in some time. And considering the Batsgiving poster, we haven’t seend the Court of Owls play a part in this story yet, so we know it’s coming soon.

So what are your thoughts? Who do you think is behind all this? Have we seen them yet? Let me know in the comments.