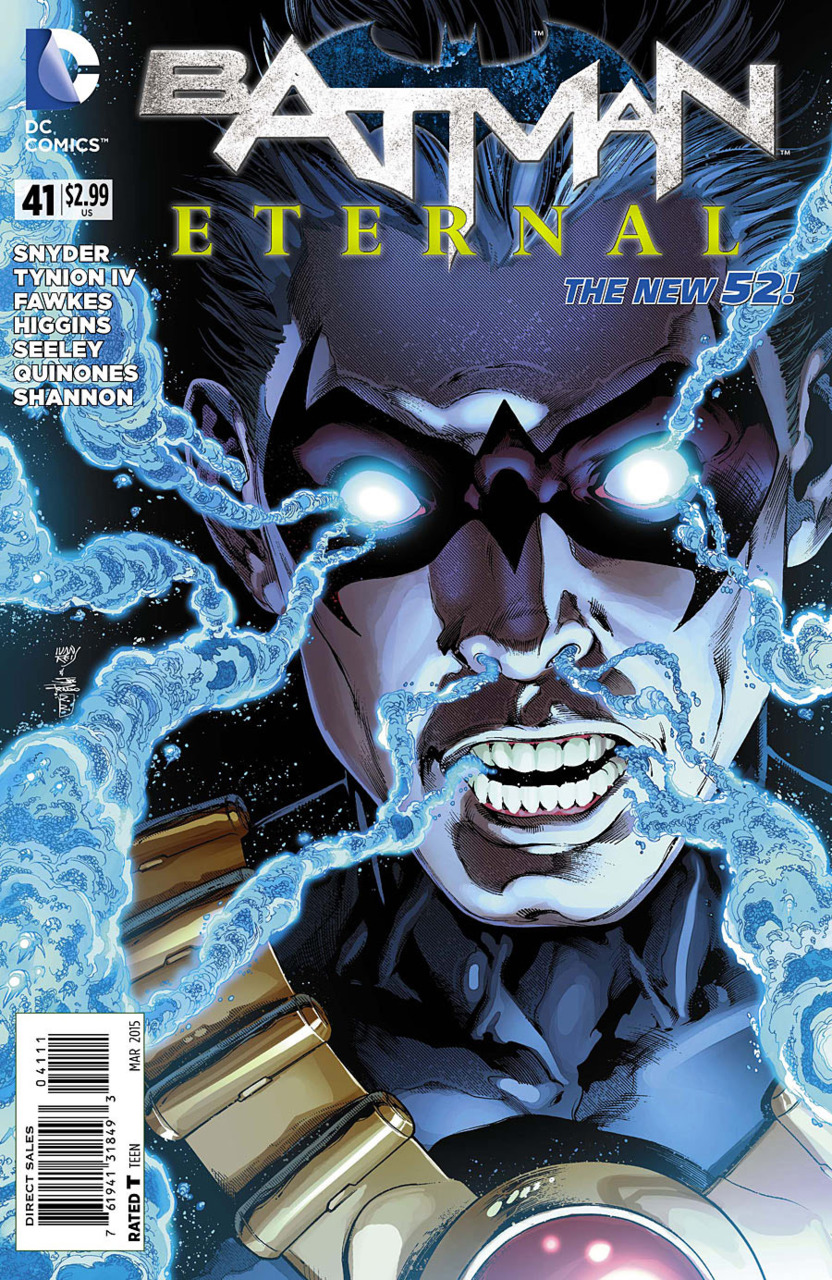 This week’s issue of “Eternal” opens with a group of the creepy white eyed kids stopping a truck in the middle of the street. As the driver gets out, he is overcome by several long white tendrils of unknown origin…the tendrils grab the truck he was driving and announces “objective acquired.”

Meanwhile across town, Red Robin is staking out a warehouse where he witnesses the truck arriving. He is currently talking to Harper Row and they are discussing the recent thefts of materials like heavy metal, copper wiring and toxic chemicals. It seems that they were keeping an eye on the victims of the nano virus…and they have started disappearing (including Harper’s brother) and stealing materials.

In another part of the city, we see that Spoiler is still alive…despite the bounty on her head. And she is suddenly surprised by an unknown costumed vigilante. The two briefly fight before he knocks Spoiler out, stating that he doesn’t want her dead…quite the opposite, his employer wants to keep her alive.

We cut back to Red Robin who has assembled some help in infiltrating the warehouse: Batgirl and Red Hood. They banter quickly before setting to work; Batgirl wonders where Batman is (he’s currently dealing with Riddler) and Jason complains about having to use rubber bullets. Red Robin and Harper briefly discuss putting on a costume…Harper desperately wants to help save her brother Cullen, but Tim is concerned that she isn’t fully thinking about the ramifications of becoming a vigilante. As Red Robin and Batgirl swoop off, he tells Harper that he needs her to monitor their communication frequencies.

The three Bat Family members spring into action: Red Robin and Batgirl crash through the windows and begin to engage some of the nano-infected victims, while Red Hood comes in from another entrance and creates chaos. As the trio fights, it is finally revealed who is behind the nano tech: the Mad Hatter. While Tim and Tetch trade some witty dialogue, Harper realizes what the Hatter is trying to do…distract the heroes in order to allow the nano tech to take control of them. Before she can warn them, Mad Hatter presses a button and the nano droid tendrils spread across the warehouse and infect Red Hood. Batgirl tells Tim to leave so he can find a way to help them as she engages Jason in a fight…however she is quickly overwhelmed herself and is infected by the nano bots. As Red Robin attempts to flee, he calls to Harper but in mid sentence is also infected.

As our issue comes to a close, we see that Harper has returned home and is leaving a video message for her brother. She apologizes for her actions and states that she believes it is all somehow her fault. She finishes by saying that what she is about to do, she had no choice. It is then revealed that Harper has assembled her own costume…and as she dons her mask we cut to a full page image of Bluebird.

I really liked this issue. I enjoyed the fact that we got some answers in this issue, and it was revealed that the Mad Hatter was behind the entire nano tech storylines that started way at the beginning of “Eternal.” My only gripe with this issue was that it took SO LONG to resolve this story. It was very early in its run where we were introduced to this story, and it was only every so often that we caught up with Tim who was investigating…which turned into training Harper…and now it concludes. I almost felt a little disappointed that our villain turned out to be the Mad Hatter, not that there is anything wrong with him…but for a story that spans this long, I would have assumed another A-List villain was responsible.

I also enjoyed the team up and dialogue between Red Robin, Batgirl and Red Hood. I always like when the members of the Bat Family get together without Batman present. They seem to get along really well together and have a bit more fun when “dad” isn’t around.

Overall this was a nice issue, and I am looking forward to seeing what happens now that the Hatter has control over Batgirl, Red Robin and Red Hood…does Bluebird get to rescue them right away? Or does that not happen until the end of “Eternal?”