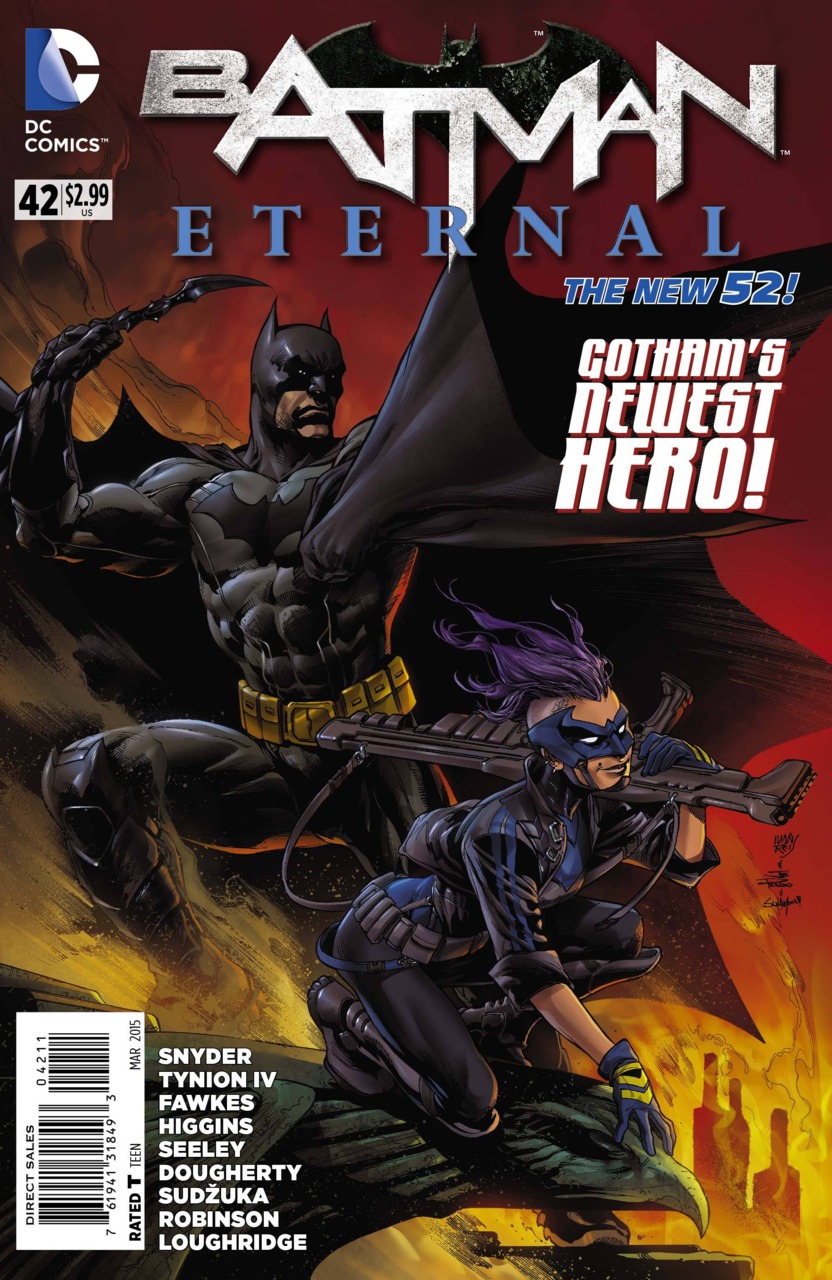 This week’s issue of “Eternal” opens with the Mad Hatter standing in front of the warehouse featured in the previous issue. With him are the nano-bot infected Red Robin, Batgirl and Red Hood who watch as dozens of other nano-infected citizens arrive.

However, a shadowy figure lands on the roof of the warehouse and it is revealed to be none other than Bluebird. Harper recaps on how her allies had been captured by the Hatter and she has developed a piece of code that she pulled from her brother in order to repel the nano-bots…this way she won’t get captured or mind controlled like the others.

We then cut to a bedroom where we see Stephanie Brown wake up to her mother standing over her. She briefly freaks out as her mom was one of the people trying to kill her, but she explains that she didn’t know that lengths that her father (Cluemaster) would go to…and if she had she would have gotten them both out sooner. She reveals that she was the one who had hired Killshot to protect Stephanie in the previous issue. Steph’s mom promises to get them out of Gotham in the morning and that she won’t let her go again.

Back at the warehouse, Bluebird is suddenly surprised by a nano-thug and she realizes that her coding must have worked as she has not become infected. However, she quickly falls from a catwalk and lands in front of the Hatter and his assembled minions. Harper quickly finds her brother in the crowd and grabs Cullen in order to get him to safety. A nano tendril suddenly erupts from Cullen and sends Harper flying and she is quickly grabbed by Red Robin, Batgirl and Red Hood. Harper tries to appease the Hatter by being complementing his talent in electronics…however she quickly knocks Tetch’s hat off his head and electrically shocks her three captors.

Freed momentarily, Harper scoops up Hatter’s hat and places it on her head…effectively taking control of the nano-bot controlled mob around her. With the technology now under her control, Harper causes the generator sending out the signals to explode and frees everyone from the nano-bot control. Harper grabs her brother in a massive hug, and Batman suddenly descends from the rafters and apprehends Mad Hatter. After questioning Tetch, Batman pulls a similar invitation from his pocket…an exact duplicate as to the one sent to the Riddler regarding Gotham’s destruction.

As Batman turns to Red Robin, he mentions they have much to discuss regarding Harper Row and he departs. Later, Red Robin and Bluebird discuss what had happened on the roof of the warehouse…he tries to make her realize that she didn’t fully think through “putting on a costume.” But she responds it was her decision to rescue them “and if one day I don’t want to do it anymore…then I’ll stop.”

The issue closes with Stephanie Brown waking up again to find her mother gagged and tied up. A rag suddenly covers her mouth and she slumps into unconsciousness as it is revealed that Selina Kyle has finally found her.

We are getting closer and closer to the teaser issue of “Batman” #28 you can almost taste it. Slowly all the pieces are coming into place: Stephanie has now been captured by Selina and Bluebird has made her debut…should be only another issue or two before everything comes into alignment.

Other than seeing the teaser information slowly begin to resolve into clarity, this issue was pretty good and I enjoyed the humor used with Harper when she is trying to help rescue the captive heroes. I think that Harper Row is definitely growing on me, and I can really appreciate how the writers have used “Eternal” in order to better develop her character and bring her into the forefront with the other Bat Family members.

My only issue comes from Stephanie Brown’s mother. It seemed to me way back at the beginning, that she seemed complicit and even encouraging in the fact of tracking down Stephanie and taking care of her. Now, this could be that nearly 40 issues have passed since these events…and everything could be coming back a little fuzzy, but I was generally surprised and confused at her actions (almost exactly like Steph was). Hopefully this will get clarified, but I have a feeling that this could be something that the writers may have decided to change down the road.

Overall, “Eternal” is shaping up to be quite an excellent Batman story and I am looking forward to its conclusion in the coming weeks.