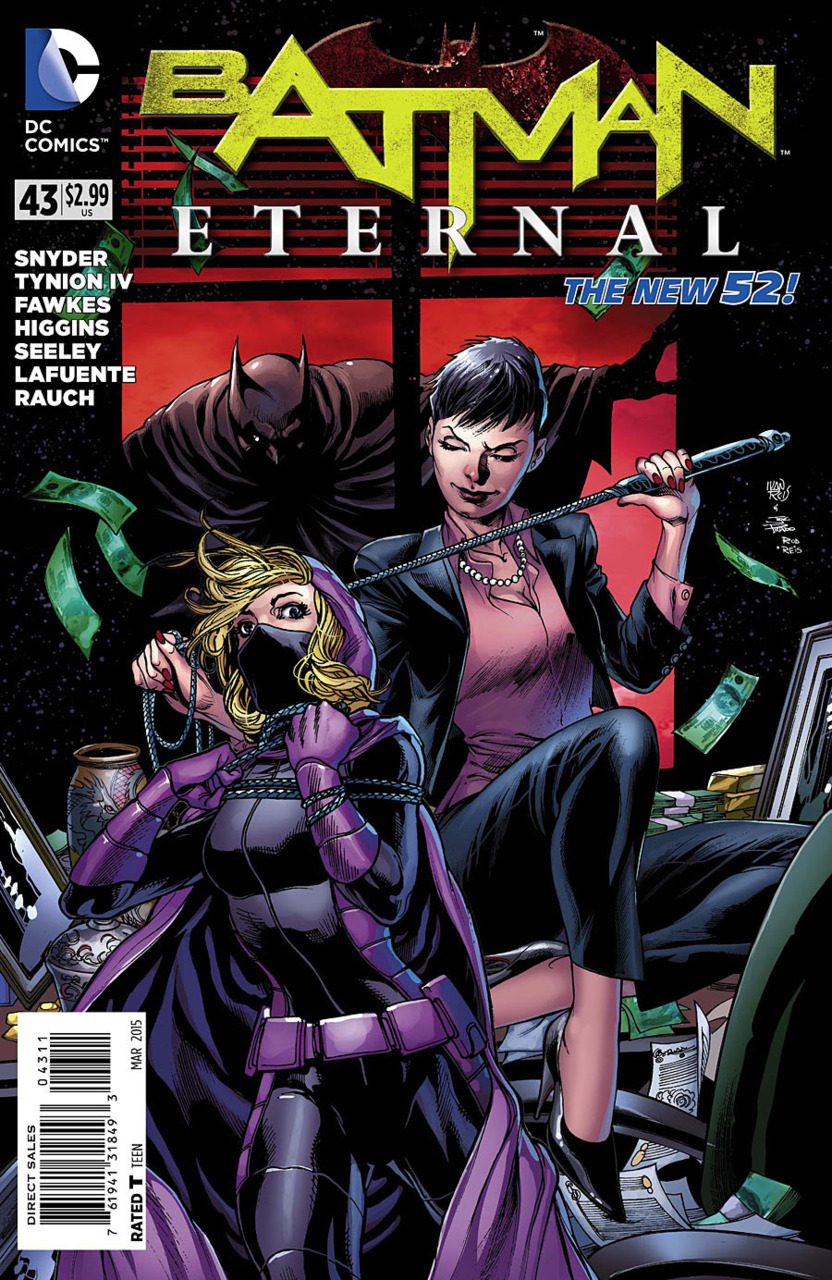 *Please note that this issue takes place after the teaser “Batman Eternal” issue seen in “Batman” #28.*

Our issue opens this week with Batman and Bluebird deep in the Narrows, standing on the roof of Harper’s apartment discussing Stephanie Brown. Batman informs Harper that Steph will be staying with her for the time being. Harper tries to convince Batman that if she allows her to stay, then Batman will have to train her properly as compensation. Batman departs with a solemn “I’ll think about it.”

Inside the apartment, Harper’s brother Cullen tries to comfort Steph by offering tea and trying to break the tension with conversation. Bluebird enters and tries to convince Stephanie to tell her the information that she knows – who is behind all the problems plaguing Gotham? They both get into an argument over the matter but it is broken up by Cullen. Steph seems extremely resistant to trust Bluebird since she is an ally of Batman.

We then cut to 6 hours prior to these events; Stephanie awakes inside the Egyptian and talks to Selina regarding the recent events including how Selina gained the nightclub in the first place. Selina then turns the conversation in the direction of the big question – who is the big bad behind everything?

Back in the Narrows, a joyous Harper is busy taking her brother to his favorite store; however they are quickly accosted by a disguised Tim Drake who tells Harper to meet him later. Back at her apartment, Red Robin discusses rescuing Stephanie Brown who is being held captive by Selina Kyle within the Egyptian casino. Tim explains that they can’t use any other member of the Bat Family to enter the casino, as Selina has a special Waynetech XR2600 body scanner that can recognize any of them…Harper however is unknown and can easily sneak inside. Harper becomes agitated that Tim is here discussing the plan, rather than Batman coming himself…it seems the Dark Knight still doesn’t trust her.

Inside the Egyptian, Selina continues to press Stephanie for information and asks why Steph hasn’t gone above the heads of the cops and taken the information right to Batman. Several minutes later, Batman and Bluebird can be seen battling against the guards within the casino (as seen in “Batman” #28). With the guards knocked out, Selina approaches the duo and brings them to where she is keeping Spoiler. Steph begs to stay with Selina rather than go with Batman, but she ends up leaving with the heroes.

We cut back to the present where Stephanie and Harper are still discussing what had happened that night. They seem to bond over the mutual agreement on how cool Catwoman is, and Harper finally convinces Steph that Batman can be trusted. The issue closes with Stephanie dropping the biggest spoiler – the man behind everything…is Bruce Wayne?!

Well who saw that coming? Of all the crazy theories that I have read on who could be behind this massive event, I never thought Bruce Wayne would be the culprit. Now…obviously our Caped Crusader is not the mastermind of his own destruction, so who does that leave? Stephanie explains that she “saw” Bruce talking to her father Cluemaster and the other villains…way back at the beginning of “Eternal” (I’m also glad this was explained) but did she really see Bruce? Or was it someone pretending to be him? Maybe it could have been Clayface impersonating him…at that point he hadn’t been captured yet, and we have even seen him portray Bruce before in Scott Synder’s run on “Batman.” Whatever the answer, we are getting closer and closer to our big villain.

Overall I enjoyed this issue; it really flowed well with the previous teaser issue and connects all of the plot lines brought up within the “Batman” issue. It will be interesting to see what happens next as we delve deeper into the mysteries surrounding who is bringing together all of these villains.