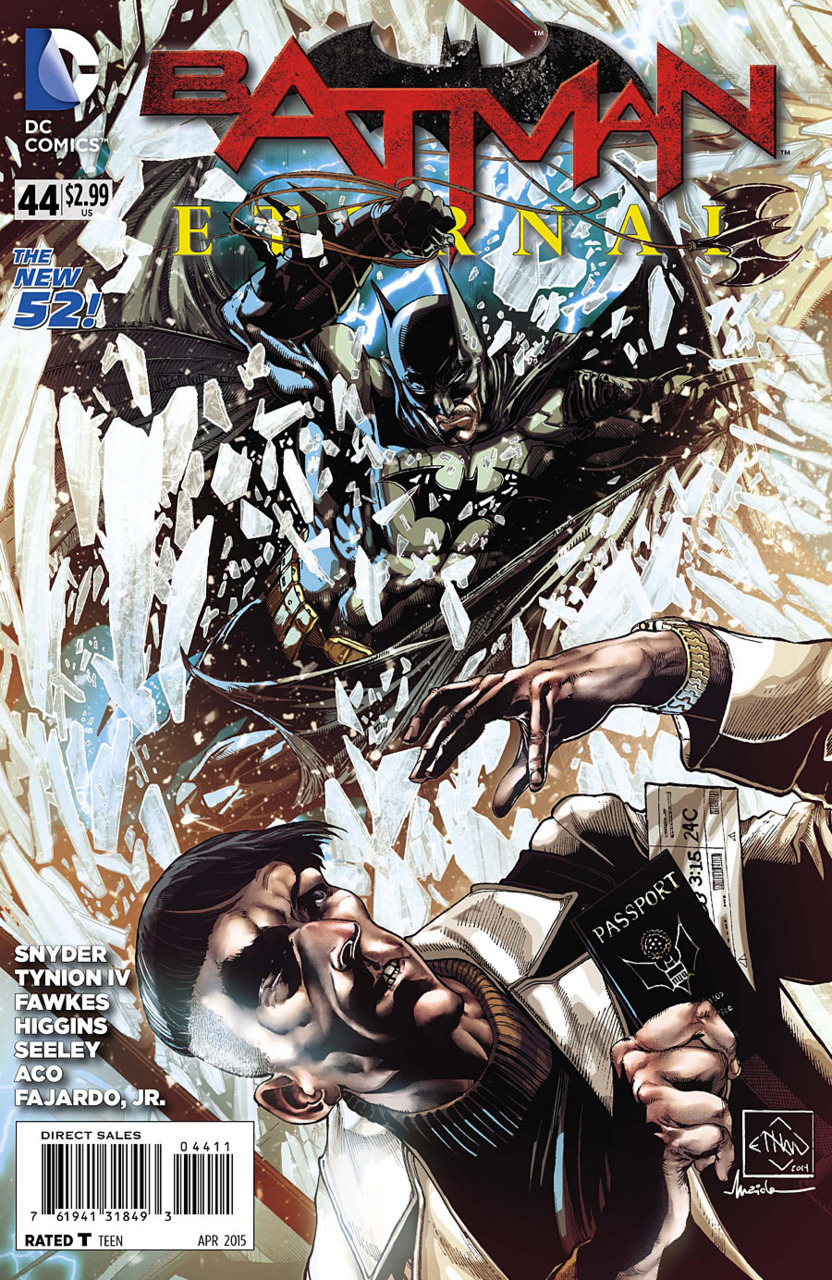 Our issue this week opens at Gotham Central Precinct where we can see several police detectives interviewing a few of the Arkham inmates including the Ten Eyed Man, Maxie Zeus and Magpie. The officers ask each of them who was responsible for the collapse of Arkham and they all give the same answer – Professor Achilles Milo.

We then cut to Batman who is swinging his way across Gotham as he discusses Milo with Julia Pennyworth. Penny Two reveals that Milo was working as a pharmacist out of Arkham and was even teaching chemistry at Gotham Academy. She informs Batman that the police have an APB out on Milo and that they, and the other members of the Bat Family, are searching Gotham for him.

We cut over to Coventry where we catch up briefly with Luke Fox who is busy installing Nth metal into the gloves of his suit in order to rid himself of the ghosts that have followed him back from the destroyed Asylum. Then we see Bluebird and Spoiler arguing about Bruce Wayne and how Spoiler still can’t believe that Harper is willing to work with him. The two end up coming to blows as Harper tries to stop Stephanie from leaving the apartment.

Over at Gotham International Airport, Professor Milo as attempting to flee but is recognized by several police officers. As they try to apprehend him, one of the officers accidentally activates some sort of toxin that disperses from Milo’s bag. The cops and people around him start to go crazy and Milo attempts to run…until Batman crashes through a skylight. He knocks Milo flying and ties him to a beam in the ceiling. Batman then starts to incapacitate the other infected people to ensure they don’t hurt anyone around them. Milo ends up getting himself free and escapes onto the tarmac of the airport. As he runs he knocks over a pair of air traffic controllers but is confronted by the batwing. Batman remotely orders the plane to target all of Milo’s drugs and disarm him…which it does.

The issue closes with Batman apprehending Milo and demanding to know what he had done. Milo reveals that someone gave him the science and magic to destroy Arkham, he received an invitation just like all of the others. As Batman holds Milo in the air and demands who gave him the information, several ghostly spectral hands (at least that’s what I think they look like) start to grab the Dark Knight and his captive.

Well this was definitely a very quick read this week. Not much happens, but we do get to see that Professor Milo was behind the destruction of Arkham and using Maxie Zeus as a conduit to bring back Deacon Blackfire. It seems that this issue was a quick filler to wrap up the Arkham storyline and reveal who was behind what had happened…honestly I had kind of forgotten about how Blackfire was trying to possess Maxie, so I had to go back and re-read some issues.

Overall this was another issue where we saw another villain be revealed as having been pulled into the giant scheme of “Batman Eternal” and this could easily have been explained in a few lines of dialogue. Not sure it was worth an entire issue, but I am looking forward to next issue as it teases that “The Truth” will be revealed.