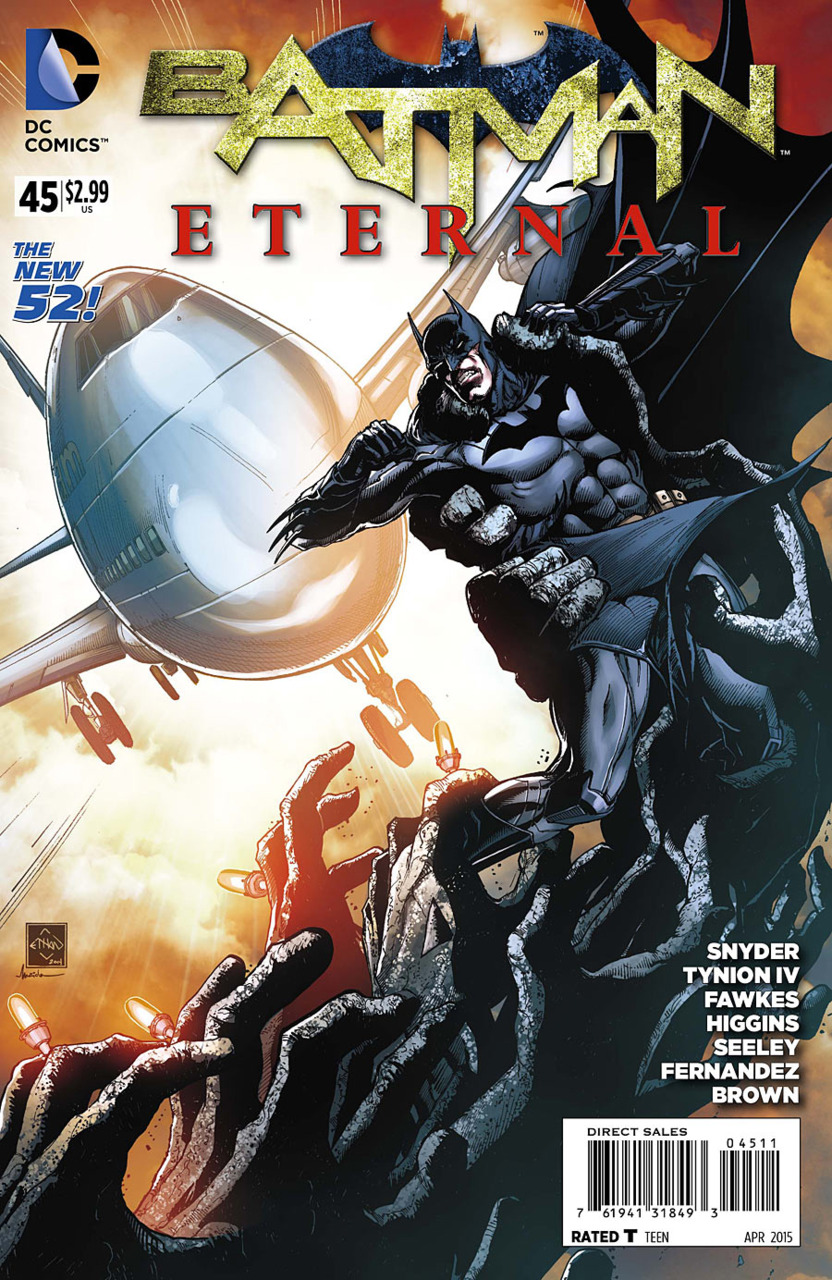 As the ghostly spectres of his parents reach towards him, this week’s issue of “Batman Eternal” takes a more ghoulish path. A haunting figure that identifies himself as Martin Ware seems to be surrounded by the spirits of Milo’s victims in Arkham Asylum. As Batman tries to keep the ghostly figures away from an unconscious Milo, Batman grabs Ware and tells him to stop controlling the various spirits. Ware bemoans that he never wanted any of this, and Batman quickly takes him out with a swift punch…the spirits dissipate following this. Batman rushes to Milo’s side and begins to resuscitate him, however the GCPD arrive and tell Batman to put his hands in the air and surrender. Batman however can’t be bothered with giving in to the cops and continues to save Milo.

We then cut across Gotham to the apartment of Luke Fox who is still busy dealing with the spirits of Arkham. Having finally woven in the Nth metal into his gloves, Luke begins to attack the various ghosts which dissipate after contact with the alien metal. As Batwing battles against the ghosts, the panels are intercut with Batman successfully saving Milo and then releasing a massive flash bang from his belt and disappearing. Back with Luke, Jim Corrigan arrives and comments that he never thought punching a spirit would ever work…but Luke has made that possible.

Corrigan then apologizes for what happened after the destruction of Arkham, and how he had no control of what the Spectre was going to do. Corrigan then receives a call from Batman who has captured Milo and needs his help; Corrigan agrees to meet at Gotham Cemetery.

Sometime later, Batwing and Corrigan meet up with Batman. As Corrigan takes Milo away to interrogate him over how he received the magic used in Arkham, Batman and Batwing discuss the events that occurred at the Asylum. We suddenly see Corrigan knocking Milo out, and it is explained that he was attempting a summoning ritual. Corrigan explains that Milo was receiving his instructions through his dreams, and how this method was a perfect path to allow Blackfire to attempt to crossover. Corrigan finishes that Milo should never have even had access to this level of magic.

We then cut to Stephanie Brown and Harper Row, who are still debating over the fact of Bruce Wayne being the real big bad behind the events of “Batman Eternal.” Harper eventually decides to leave and speak with Batman about getting Spoiler safely out of Gotham…but not before leaving behind her stun gun (a precaution to ensure Steph stays put).

Back in the Batcave, Bruce and Julia discuss the method used to gain access to all of Bruce Wayne’s holdings after the fall of Wayne Enterprises. Julia comments that it was unnecessarily complicated. Batman admits that it is more like a signature but can’t quite pinpoint who it is referring to, Julia then offers for Batman to get some rest and Bruce counters that she sounds a lot like her father. They both then return to the screen and Batman suddenly comes to the conclusion that all of the companies that purchased various holdings had references to Arabic demon myths. As Batman stands, he tells Julia to ready the batwing for a long journey. The issue closes out with Batman revealing to Julia the answer: “who is devious enough and rich enough to snap up all the pieces of my company semi-legally? Who gets that far along unseen and then can’t resist putting a demonic stamp on it for me to see? Who can bring a city to its knees? Who has influence over people in all walks of life? Criminals. Lawmakers. Industrialists. Mystics….Ra’s Al Ghul”

Well another issue of “Batman Eternal” comes and goes, and are we any closer to finding out who is behind everything? This week we get to see the ending of the Arkham plotline, however I was slightly confused at who Martin Ware was and how he suddenly appeared with Batman and Milo. I had to look it up, but he was also present earlier in “Eternal” and was going by Mister Bygone and was trying to help Deacon Blackfire crossover into Maxie Zeus. How he suddenly showed up is beyond me, and I don’t think that this was a plotline that we needed to see an end to…clearly he had been forgotten about. Other than that, Batman gets answers from Jim Corrigan that Milo would have had no feasible access to the amount of power needed for what happened at Arkham.

Of the other plotlines, Bluebird and Spoiler make more appearances…still arguing about Bruce Wayne. However Harper finally decides to go to Batman in regards to getting Spoiler out of the city, however I’m a little curious as to why she all of a sudden finds this idea pertinent.

Lastly we have the big reveal! Or do we? In the very end we get dropped a bomb that Ra’s Al Ghul has been behind the events in Gotham City…however is this real? Or are we simply being thrown a red herring? Neither Ra’s nor the League of Assassins appeared in the Batman Thanksgiving promo art released last year, so can the Demon’s Head really be behind this massive story? I mean, it is completely possible. Ra’s is one of Batman’s more powerful allies and is manipulative enough to mastermind all of these events. But, I have always seen Ra’s Al Ghul as being a villain that enjoys leaving his name on his deeds. Batman always identifies the Demon almost immediately when one of his crimes comes to Gotham City. So, can the Demon really be behind all of this? Or is someone simply putting Ra’s in Batman’s crosshairs so they can continue their reign of terror? Guess we will need to wait and see.