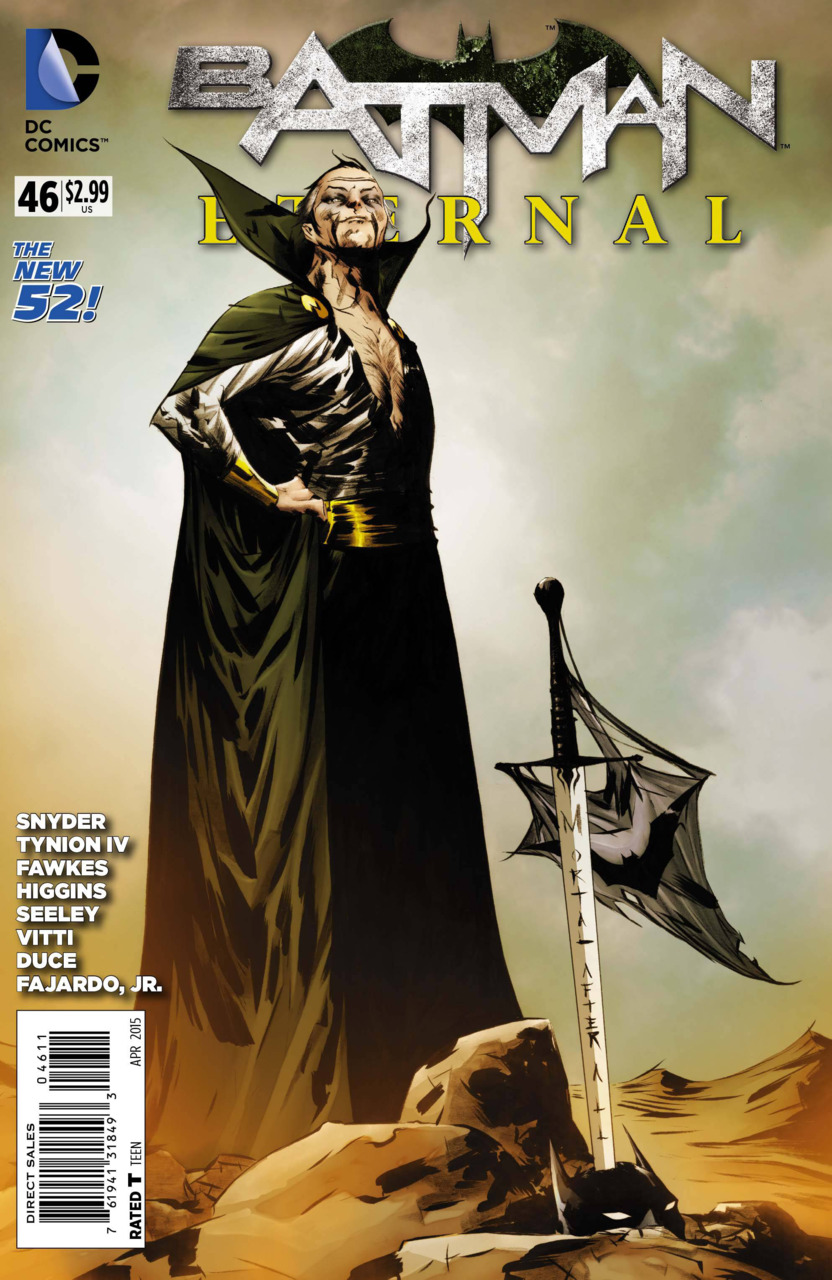 This week’s issue of “Batman Eternal” opens with Poison Ivy busy talking to her plants and transplanting several flowers into another pot. We then cut to Batman who is busy battling a horde of assassins as he screams for Ra’s Al Ghul. As Batman battles against the ninjas, he continues taunting the Demon by letting him know that he is the one behind the mayhem occurring within Gotham and that “I know you aren’t lying in the bottom of a ravine in the ruins of Nanda Parbat.” Nearby, Ra’s discusses with another villain named Dr. Darrk how Batman believes him to the person responsible for the events since Gordon was arrested. Darrk agrees that it is time for Batman to begin his next lesson, and Ra’s instructs him to “prepare for time travel.”

Back in Gotham, Selina comes to visit her father Rex Calabrese at Blackgate Penitentiary. Selina and Rex discuss the recent events and Selina tries to gather information on who could have provided all of the advanced weaponry to the Arkham villains. Rex doesn’t seem to know so Selina departs. Meanwhile in the Batcave, Hush continues to play mind games with Julia Pennyworth but is summoned away when Batman contacts her.

Back at the League’s stronghold, Batman enters a room that is teeming with gas and suddenly loses communications with the Batcave. Ra’s’ voice is then heard throughout the room and begins to taunt the detective. Ra’s prompts Batman to use his heightened senses to realize that they aren’t in a room anymore…but the future! As Batman turns, he sees several images of himself…only older and more menacing. Ra’s asks if what he sees is a cynical version of himself or if he has passed his mantle onto another – images of Dick, Terry McGinnis and an older Damian weave throughout the room. Ra’s then offers his new question “is Batman eternal?” As several more versions of Batman appear, Bruce darts forward and attacks Doctor Darrk who he seems to have found within the fog/smoke/gas. As the visions fade, Batman tells Darrk that he was supposed to be dead and demands to know what Ra’s wants. They are both surprised by the arrival of Lord Death Man who seems to be a captive of Darrk’s. As Batman battles against Lord Death Man, Ra’s’ voice returns and reveals that he had rescued him from his imprisonment in space and sought to determine if his blood could be a replacement for the Lazarus Pits. After he is subdued, Batman leaves Death Man and continues to wander as Ra’s tells him that he is not responsible for Gotham’s downfall.

Batman finally comes upon the room that holds Ra’s Al Ghul…but not as he suspected. Ra’s explains that after their last encounter, it took weeks to crawl out of the ravine and return to the League…and that he isn’t responsible. When he kills Batman, he wants him at his strongest. Batman continues to press that Ra’s must be responsible but the Demon counters that “when I kill you, my detective, it will be when you believe you are immortal! When you believe your legacy is secured! When you believe you are as eternal as I! When we are truly equals!” As Batman realizes that Ra’s isn’t the mastermind, the Demon tells him to find the real culprit and then to evolve and become better…and then wait for him.

This issue closes as we cut back to Blackgate as we see Rex Calabrese talking with another inmate. The inmate hands Rex several manifests of items that have been coming into Gotham recently and Rex realizes that the items all refer to each villain’s wish list of things that they have ever wanted…and the last images show Joker’s Daughter, Mr. Freeze, Scarecrow and Poison Ivy preparing for the horrors to come.

Where do I begin?!

Well this was definitely a ground breaking issue (for me at least) as we discover that Ra’s Al Ghul…is not the big bad! As another villain bites the dust on who is responsible for the “Batman Eternal” events, we get a very unique set of scenes that revolved around the legacy of Batman and whether he is eternal. Ra’s offers the question on whether Bruce believes that his mantle will last indefinitely and we get to see several versions of future Batmen such as Dick Grayson (seen in the post “Final Crisis/Battle for the Cowl” era), Terry McGinnis from “Batman Beyond” and of course Damian Wayne see in the futuristic setting of “Batman 666.” I have to say it was an interesting question for Ra’s to pose…is Batman eternal? More interesting is that Bruce never really answers the question.

My next point brings us back to several pieces of dialogue that refer to Ra’s Al Ghul climbing out of a ravine near Nanda Parbat…this would lead one to believe that they are referencing the events of “The Hunt for Robin” when Batman, Frankenstein and the Justice League battled against the Demon and later the parademons of Apokolips. At the end, Ra’s fell into a ravine and was believed to have died (but did we ever really think he was gone?) With all of this evidence, as well as certain events seen in the “Batman & Robin” title, one can safely assume that Damian Wayne was resurrected PRIOR to the events of “Batman Eternal.” However, the question now changes to where is Damian? Has he ventured off with Superman or Supergirl to learn to control his newfound abilities? Has he somehow died again? Or has he been placed somewhere similar to what Bruce did with Dick Grayson?

Overall this was a truly intriguing story, and we even got to see the return of Lord Death Man as well as Doctor Darrk who first appeared in “Detective Comics” #405 as a member of the League of Assassins. Darrk was responsible for kidnapping Talia who then had to be rescued by Batman. Only downfall of this issue was the changing art every other page or so…definitely a bit of a distraction. And when will we get to know the identity of our big bad!!! How many villains are left?! I guess we will need to wait and see…but this is a question I hope they answer soon.