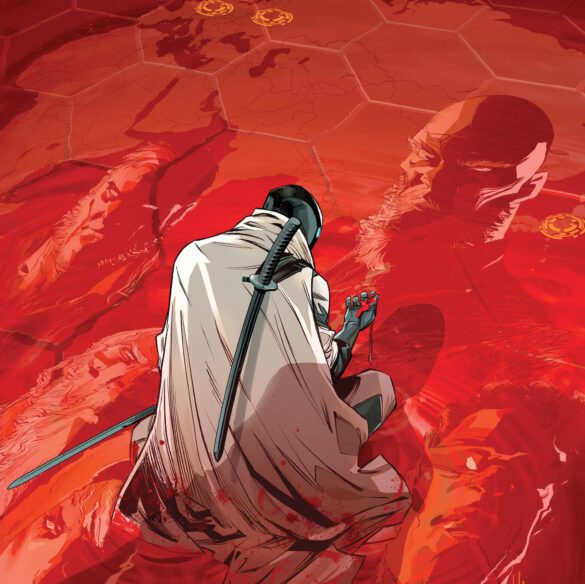 Overview: Batman Incorporated #2 continues the latest iteration of the team under the leadership of Ghost-Maker with the team trying to protect the former mentors of Ghost-Maker and Batman.

Synopsis (spoilers ahead): Batman Incorporated #2 begins where the previous issue left off, in Shanghai, China, where Skyspider is on top of Ghost-Maker. They both fall into a building and argue that Ghost-Maker has come to kill her.

We jump over to British Columbia, where we see El Gaucho and Raven Red looking at a computer of a dead guy, showing a map with triangles leading to locations that show chemical weapons. When they turn around to see a Batman in purple surrounded by lightning.

Then, we go to Suriname, where Gray Wolf and Batman of Japan are stuck in a hole trap as the trainer there is telling them how he taught Batman and Ghost-Maker to torture their victims into telling them information, how to build traps, how to contain your enemy. When Jiro says they are trying to protect him, the mentor doesn’t believe them and tries killing them with a boulder. Then a guy in a red costume hits him out of the way with the boulder and saves the two other heroes.

In Moscow, we see Knight and Wingman with Avery Oblonsky. She has a gun pointed at Wingman’s head, but after telling them they have come to protect her, she lets them inside to have some drinks. Knight passes, but Wingman accepts. Avery tells the story of how she met and trained Ghost-Maker. When Knight turns around, we see that Wingman has been drugged from the drink and is unconscious. When Knight turns her back to check on him, Avery pulls out a needle and almost stabs Knight with it before a girl in a red costume jumps through the skylight, saving her.

Back in Dublin, we see Dark Ranger and Black Mist taking a closer look at the sword found in the last issue that had the Ghost Makers emblem on it. They start to theorize how and why it was used to fight.

Ghost-Maker, following Skyspider, meets her on a rooftop and explains that the reason he murdered his teacher was that he knew that Ghost-Maker was a Psychopath and tried killing him. Ghost-Maker fought back, killing him. After that, she tries to convince Ghost-Maker to take his mask off after she did. Ghost refuses, but then Clownhunter shows up. Skyspider then mentions him being a sidekick after what happened in the past. Then, Skyspider flies away until a bomb goes off. Ghost-Maker and Clownhunter go down to check to see if she’s alive. When they get there, Ghost-Maker tries to save Skyspider, but she dies in his arms. When he looks for Clownhunter, his mask is on a pole, and we see him in a van tied up and blindfolded. Then we see someone remove the blindfold, and we see Ghost-Maker’s previous sidekick Phantom-One.

Analysis: I want to start out by saying that while I have read multiple Batman series in the past, Batman Incorporated was never something I read. So going into this series, a lot of the characters are new to me. I read the first issue, but even with the editor’s notes, it is hard to know exactly who is who and what makes them unique. That said, it makes it difficult to come into a new series and know what is going on.

Having the obvious team members was fine in Batman Incorporated #2, but then there were four characters that have not been seen before (as far as I am aware), including a matrix like Batman, a Viking Guy Superhero, and a hooded girl. Without given names, we will hopefully learn the origin of these characters soon, as it is already difficult to describe what is happening without knowing all of the new additions. They could have been from the time Lex Luthor had the team or from a future opposing team.

It has been an interesting story with a lot of things happening all at once. The story keeps you engaged, but you have to wonder if the large cast of characters will keep readers from making connections with them as there isn’t a lot of time for them to shine. There are a lot of members of the team being captured which seems to make those characters build up in a negative way. It will take a few more issues for the point to come into focus if the majority of the issues are going to jump around like the first two.

When looking at the art of the book, I really enjoyed what I saw, but it was hard to overlook the flaws within the story. I hope it can be fixed quickly in the next few issues.