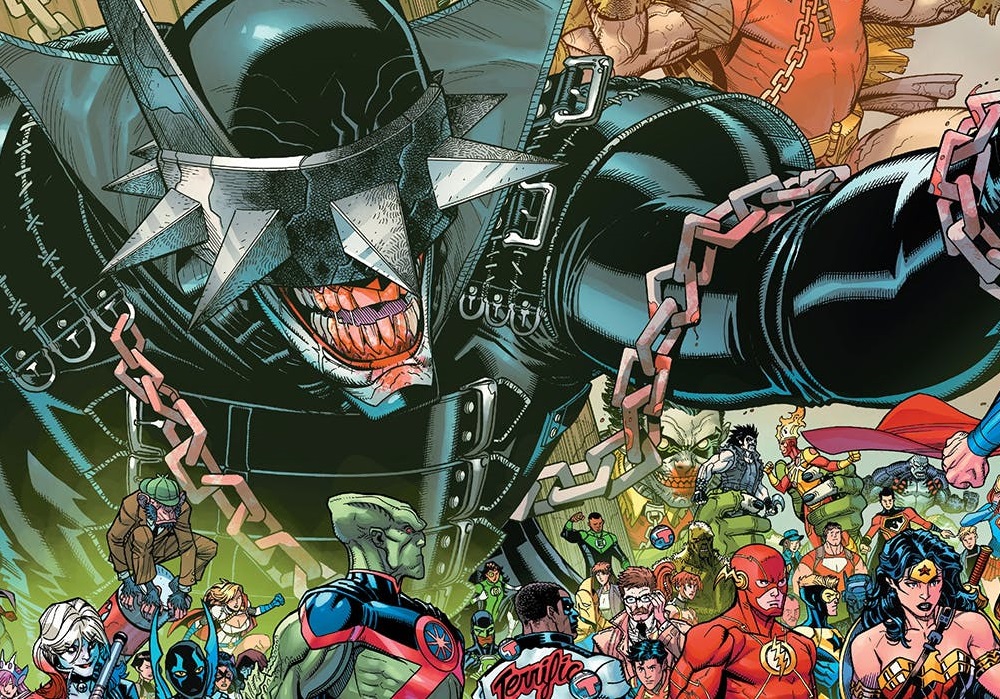 In DC’s Year of the Villain one-shot that was released just prior to Free Comic Book Day back in May, a new group of villains was teased (as seen below) that will be fighting Batman and Superman in their upcoming new series, Batman/Superman. As speculative fiction is my specialty, it was entrusted on me to figure out how this team will end up getting recruited by the Batman Who Laughs. It’s an interesting question, especially since all the options are good, heroic people. And while it was hinted in the below image, Shazam has already been revealed as one of the six. When I volunteered to tackle this speculation, I was told to focus on the Batman Universe characters only rather than all of the characters shown in the promotional image. This makes it easier to decide how all this ends up taking place. I did not need to decide among the group who was or was not going to become a member of this mysterious order as let’s be honest, anyone of them could be part of the team as no one is really off the table. I just needed to write down what I felt was the best possible way this team would be formed and what would come of it.

Before I can explain who gets taken first, I need to explain how they all get taken, because a friend pointed out a nice teaser in The Batman Who Laughs #5 where they mention half a dozen vials of dark matter, the same stuff Bruce is using to think like the Batman Who Laughs. The stuff converts you cell by cell into your dark counterpart. Batman Who Laughs isn’t bringing over mirror counterparts or shapeshifting things into these Bat-folks. He’s literally turning them evil on a cellular level. Altering their mind and bodies to become dark counterparts. A process I am now calling “The Darkening”. Simply injecting the solution begins the transformation over a period of a few hours or days, depending on their will and fortitude, saving throws. The one time ward to the Caped Crusader, Dick Grayson suffered a traumatic injury to the brain when he was shot by the KGBeast. This left the young man with amnesia and unable to reconcile with a past he no longer cared about, he left his family behind to find himself.

Ric has cut himself off from the rest of the Bat-Family, this much is obvious. It is also clear that this makes him the most vulnerable of them all. An easy target for anyone to take out without the rest of the Bat-Family even hearing a whimper. Ric didn’t even run to help Bruce when he was having trouble with Bane, something everyone else had no issue coming for. He doesn’t want to be in the Bat-Family, and the family can’t really get close to him. Barbara has tried, and she’d most likely be the first person he would call if something happened. But that would require him to get to a phone and get in contact. Batman Who Laughs would never give him this time.

After Batman Who Laughs has “Darkened” the young man, I predict that much of his old memories will return, as such is the way of comic book contrivances. He will use this knowledge to be a formidable threat to Batman, but by the end of the story, he will be saved, with his memories still restored and a return to the status quo that his fans have been begging for. (I say this as someone who’s been enjoying the recent Nightwing arc.) Catburglar and ex-fiance to the legendary Batman, Selina is relaxing far away from Gotham after she left the Dark Knight at the altar.

Like Ric, Selina has cut herself off from the rest of the family, though for an entirely unrelated reason. Unlike Ric, she’s not suffering from amnesia, so she’s a bit harder to deal with. Not to mention, evading capture is what she’s best at, outside of pulling off a full-body cat-suit and not looking ridiculous wearing it. Ganging up on her and having an evil Nightwing with you will certainly improve your odds at capturing and “Darkening” her. I expect a long chase sequence where Batman Who Laughs and Nightwing wear her down, using the advantage in numbers to lure her into a trap that she can’t sneak out of.

After she’s been “darkened”, I can see her evil side use Batman’s feelings for her and the pain he’s in as a weakness to exploit, getting in his head. Once everything’s resolved, I have no idea if the two will get back together, that mystery falls on Tom King’s shoulders. Now that you’ve taken out the two loners, you use them to get to the rest. Barbara has been making appearances in Nightwing comics, trying to get Ric to return to the fold. Use this hope of hers, this desire for him to come back, but also use the fact that she doesn’t know that the “Darkening” has begun, to lead her into an ambush, away from the others. Like the previous two, Barbara operates outside of normal confines of Gotham City, which means you can take her out without showing up on the typical radar of chaos and sadly, unlike her pre-Flashpoint counterpart, this Barbara is just not as competent of a hero. Three vs one would be difficult even for her Oracle persona back in the day.

This ties in easily to Jim Gordon. If he hasn’t been corrupted by the end of The Batman Who Laughs then this will be the easiest way to do so. Have his daughter approach him, telling him she found something important, but she can’t tell him over the phone. He’ll be on his guard and likely won’t trust anyone but family, and that’s why she’s the perfect one to lure him into a trap, just like Nightwing was to lure her. Barbara finds him at home, incapacitates him, and helps the team “Darken” him.

I don’t see any lasting impact created by this, though with any miracle, this might push Barbara into an Oracle position while working with Batman Who Laughs and she’ll realize just how effective she is in this role and will keep doing it full time after she gets cured.

Lastly, these two. Both are too close to Batman to go at first, but now that you have a team of four dark matter doppelgangers, infiltrating the Batcave is easy enough to do. First, you lure Batman out of the cave with the Bat-Signal, using Gordon as bait. He’s the least effective of those already taken in pure combat, so he works best as bait. You just need to lure him from the Batcave to GCPD, which is on the complete opposite end of Gotham. To avoid suspicion, organize some criminal activity that Jim would want to talk to Bruce about. With Batman so far from the house, even if Bruce caught wind of what was being planned, there’d be no way to get back in time to save Alfred, even if he took Damian with him to check on Jim.

With Alfred taken over, you can use him to separate Bruce from Damian and lure the boy into a trap, and once that trap is snared, he’s toast. Even if he could evade the trap itself, there are five trained combatants who can easily overpower the boy.

This is how I imagine the entire Bat-Family being turned against Batman and how the Batman Who Laughs will try and get the last laugh. Don’t agree with my ideas? Have better thoughts? Leave a comment and let me know.