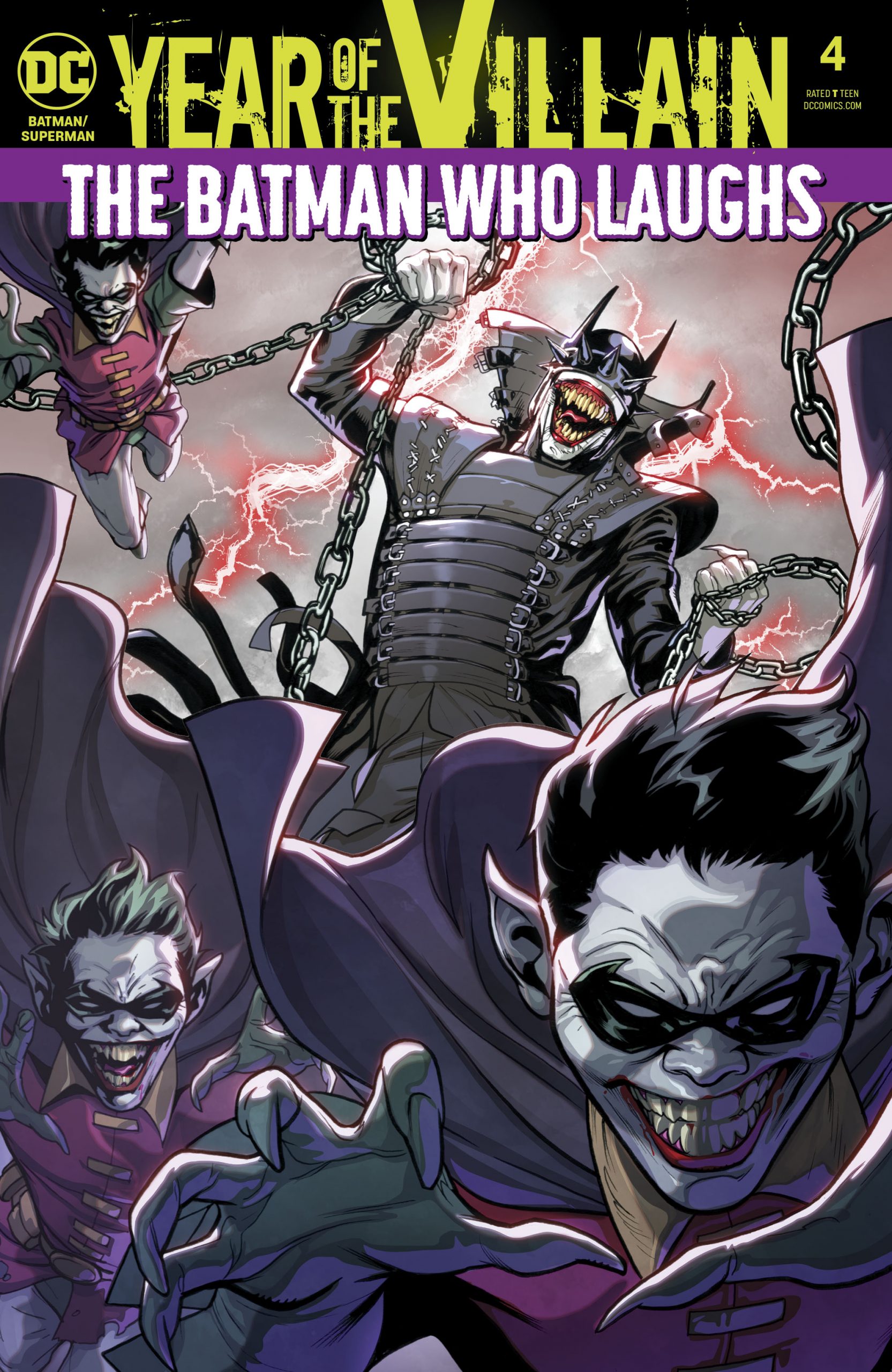 Overview: Batman and Superman are trapped inside the Fortress, and the entire Secret Six are formed.

Although the heroes already have their hands full, Donna Troy and Hawkman, both infected, come to Blue Beetle’s and Gordon’s aid. Donna uses her lasso and pummels Superman, saying he has failed Dick, Wally, and Roy. In fact, they both have failed the Titans. Hawkman attacks Batman and says he has always hated how Batman has a plan for everything. Superman tries to calm Donna, but she says the infection has not altered her feelings. These feelings have been here for a long time. The Justice League is supposed to be a signal of hope to the world and to inspire children to strive for greatness. Instead, the League has failed these kids, and they are now either all dead or lost everything.

Gordon says the Batman Who Laughs has a plan for this world, and the Fortress is necessary for the next step. Once all the six chosen heroes are infected, the real fun will begin. He will bring a purge to this world. To do so, he will need to bring over something from the Dark Multiverse – a satellite. On the Batman Who Laugh’s world, this dark satellite was the headquarters of his Justice League. With some modifications, he was able to treat it with Dark Metal and turn it into a weapon that could infect everyone on the planet. However, bringing over something this huge from the Dark Multiverse takes effort. To get the exact six frequencies, he needed to infect six different heroes which represented different energies to open the portal. Blue Beetle will create a version of the Anti-Monitor’s multiversal towers, which was used to send Superman into the Dark Multiverse (this occurred in Dark Knights: Metal.), to open a portal to the Dark Multiverse. The last piece they need for their plan to succeed is Superman. Gordon commands Blue Beetle to activate the Fortress’ security alarms. This will emit a frequency only Kryptonians can hear. Either Superman can surrender himself, or they will infect the next Kryptonian that enters the Fortress.

Batman thanks Gordon for detailing the plan, and then implodes Gordon’s old Bat Armor, causing a distraction for Batman and Superman to escape.

Superman says he has a plan. Blue Beetle may have infected the mind of the Fortress, but he has not infected its heart. The Fortress’ reactor is volatile. If the reactor is ever in danger of detonating, the Fortress will sink to the bottom of the ocean – trapping everything inside as it goes under. All he has to do is get past Blue Beetle to trigger the fail-safe. Batman says he will distract Donna and Hawkman long enough for Superman to trigger the fail-safe.

Batman engages Donna and Hawkman while riding on a piece of Kryptonian tech. He was easily able to remove Donna from the fight, but Hawkman quickly got the upper hand and was about to kill him. Supergirl, with perfect timing, knocked out Hawkman and gave Batman a lift.

Gordon asks Blue Beetle how much longer it will take to construct the tower. Jaime screams he does not want to be a pawn anymore. He just wants to go home now. Gordon says the League always thought of him as a weapon. He does not have a place anymore. Superman flings Gordon away and declares he does have a place among the heroes. He does not have to give in to the infection. Donna kicks him away and says he is lying.

She chokes him with her lasso, allowing Blue Beetle to throw the last infected Batarang at Superman. Supergirl catches it and saves her cousin from a devastating transformation. With Batman by their side, this trio begins to fight off the infected heroes once more. However, Supergirl passes out. Superman and Batman realize her hand was cut and she became infected.

A flash of thunderous lightning roared in the Fortress, and the infected Supergirl revealed herself to Batman and Superman. The entire Secret Six have revealed themselves and use their energies to charge the rebuilt multiverse tower to bring the Dark Satellite into the universe.

Analysis: I am going to start with the art first. I believe David Marquez drew an amazing issue. I loved every single panel. I loved his designs for the infected heroes. Their costumes channel this “infected” vibe well.

This issue concluded Williamson’s first arc, the assembling of the Secret Six. It has been slow at times because he has been trying to not only introduce the tone of the series but also each infected hero. I think I would have been more happy with this first arc if I did not read promotional material which exposed the identities of the Secret Six. The reveals just did not hit me as I wanted them to. That is not Williamson’s fault, but it did negatively affect my opinion on this arc. With all of the Secret Six revealed, I feel Williamson is now able to be more creative with the story.

I also like how Williamson’s story respects the continuity laid out by Snyder’s Metal and The Batman Who Laughs.

Final Thoughts: I have no clue how Batman and Superman are supposed to stop the Secret Six.