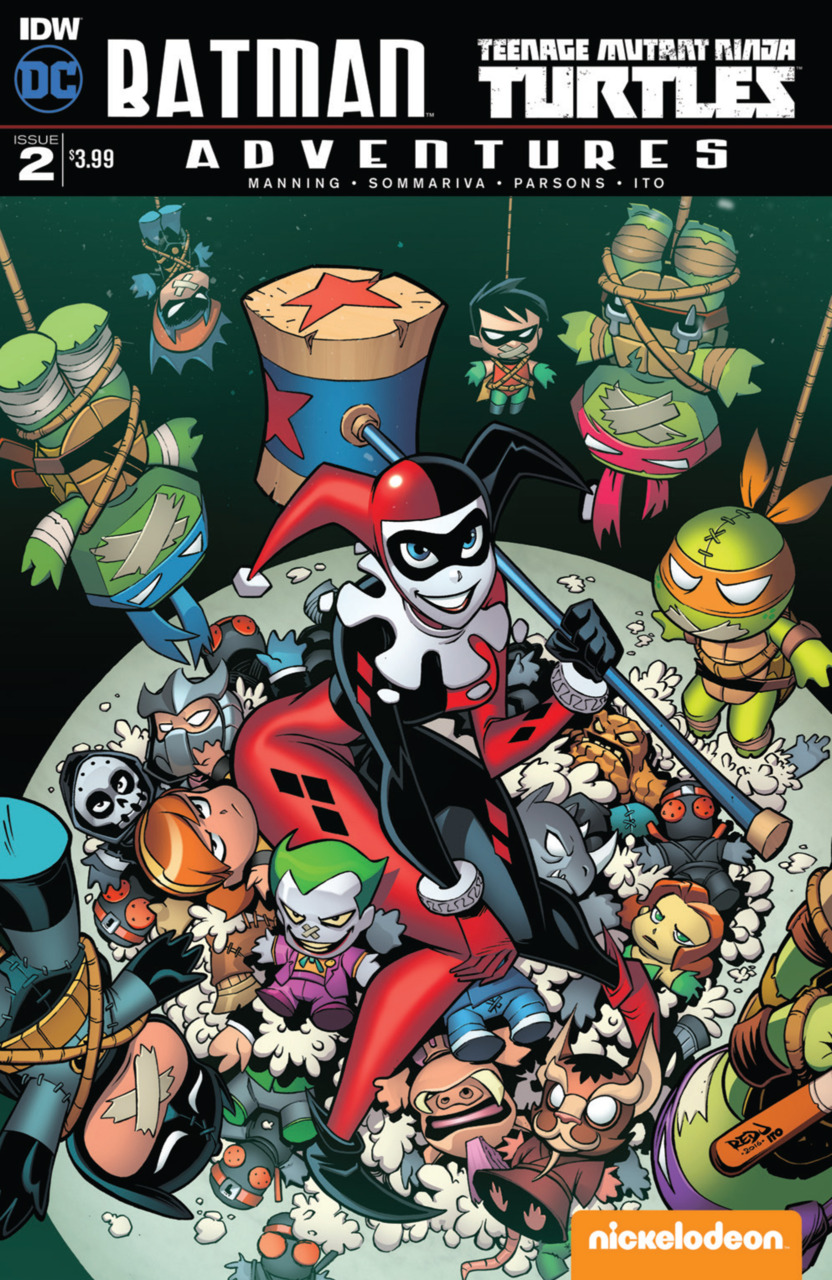 The story opens with a flashback of Harley breaking the Joker out of Arkham Asylum and escaping through two portals that suddenly appear.  Meanwhile, in the present day, the Joker meets with the Shredder.  The meeting doesn’t go well and ends with a standoff between the Foot Clan and a room full of exploding rubber chickens.  Meanwhile Batman, Robin, and Batgirl investigate one of the portals and end up in New York face to face with the turtles.  A fight ensues and just when they all start to realize they are on the same side, Snakeweed and Poison Ivy attack.

The story doesn’t move to far along in this issue.  We essentially get a meeting of what will probably be the villains of the story and the obligatory hero fight before they realize they are on the same side.  There’s not a particular lot of time spent explaining things here and the story seems more concerned with getting the characters to meet as fast as possible.   As a result this issue has a rushed feeling to it.  The Joker and Harley are in the middle of a break out and the portals suddenly appear.  There’s not any explanation as to why the Joker or Harley would automatically decide that going through the portals was a good idea.  Batman and Leonardo reasoning that they are on the same side because they aren’t trying to kill each other is also not the strongest device to make them realize they should stop fighting.  Now that the heroes and villains have met, hopefully the story has a chance to slow down a little bit.  I appreciate the attempt to fit in as many characters as they can, but the writer also has to tell a story and now that some of the heavy lifting is done, hopefully things can slow down and get into the plot more.

Where the story does succeed is in the characterization and dialogue.  Matthew K. Manning continues to have a good handle on the characters.  The Joker’s one-upmanship of the Shredder is about what it should be.  The interaction between the Bat-Family and the turtles is brief, but fun.  The meeting opening with Michelangelo feeling an “angry gargoyle” through the portal was an amusing start.  Robin being described and being dressed like a pirate was very funny (and not inaccurate. It’s nice to know what the Rrrrrrr really stands for). The inclusion of Robin and Batgirl in the story is a great idea and gives the story more variety then if it was just Batman by himself interacting with the turtles. I also like the decision to set the story in the second season of Batman: The Animated Series where all the characters are established,  but before the redesigns of the last season of the show, if for no other reason then to get a rare Dick Grayson as Robin appearance (I love the last season, but I never liked how they brought in Jason Todd and called him Tim Drake as the new Robin).

Jon Sommariva’s art suffers a little in this issue.  For the most part the surreal cartoony style works well to bring these characters together.  There are however several moments where the rules of human anatomy go completely out the window and the art seems rushed and a little unprofessional.  The opening escape scene with Harley is poorly executed and could have been done better with more panels.  It’s like the artist was trying to cram a sequence together in as few panels or pages as possible and the result is awkward and sloppy and frankly Sommariva has shown that he can do better.

All in all, despite a few bumps in the road the series remains a fun and energetic trip between Batman and the TMNT and I’m looking forward to seeing where the story goes next.