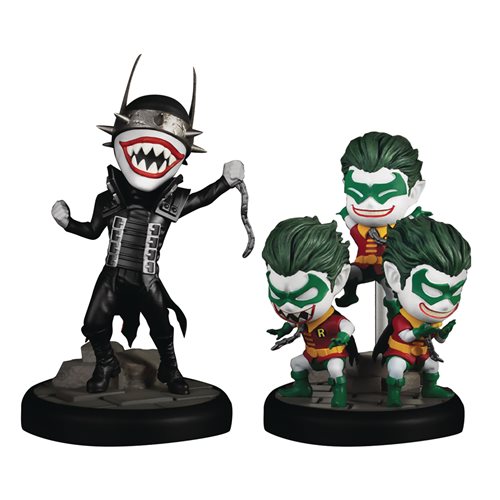 Beast Kingdom has released details for their latest MEA figure which features the Batman Who Laughs along with the Robin minions from Dark Nights: Metal. The figures measure four inches tall and come on separate bases. The set is a Previews exclusive and is priced at $29.99. It is expected to ship August 2022. You can preorder yours at Entertainment Earth.

Previews Exclusive! Enter the world of the DC Dark Multiverse with these terrifyingly cute villains! The Batman Who Laughs controls his three terrifying Robin Minions in this set of stylized mini-figures. Measuring approximately 4-inches tall, the Dark Knights Metal The Batman Who Laughs and Robins MEA-030SP Mini-Figure 2-Pack – Previews Exclusive are limited to 2,500 pieces. Add these toxically twisted mini-figures to your DC collection!

From the pantheons of DC’s Dark Multiverse comes a version of Batman unlike any other! After being infected by the Jokers evil toxins, the Caped Crusader transforms into the “Batman Who Laughs,” a combination of heroic justice and the Joker’s manic insanity. After his transformation, the Laughing Batman proceeds to take out all the members of the Batman family and the entire Justice League! The maniacal villain opens the Dark Multiverse to unleash his ultimate creation, the “Robin Minions.”