Review: Batgirl and the Birds of Prey #12 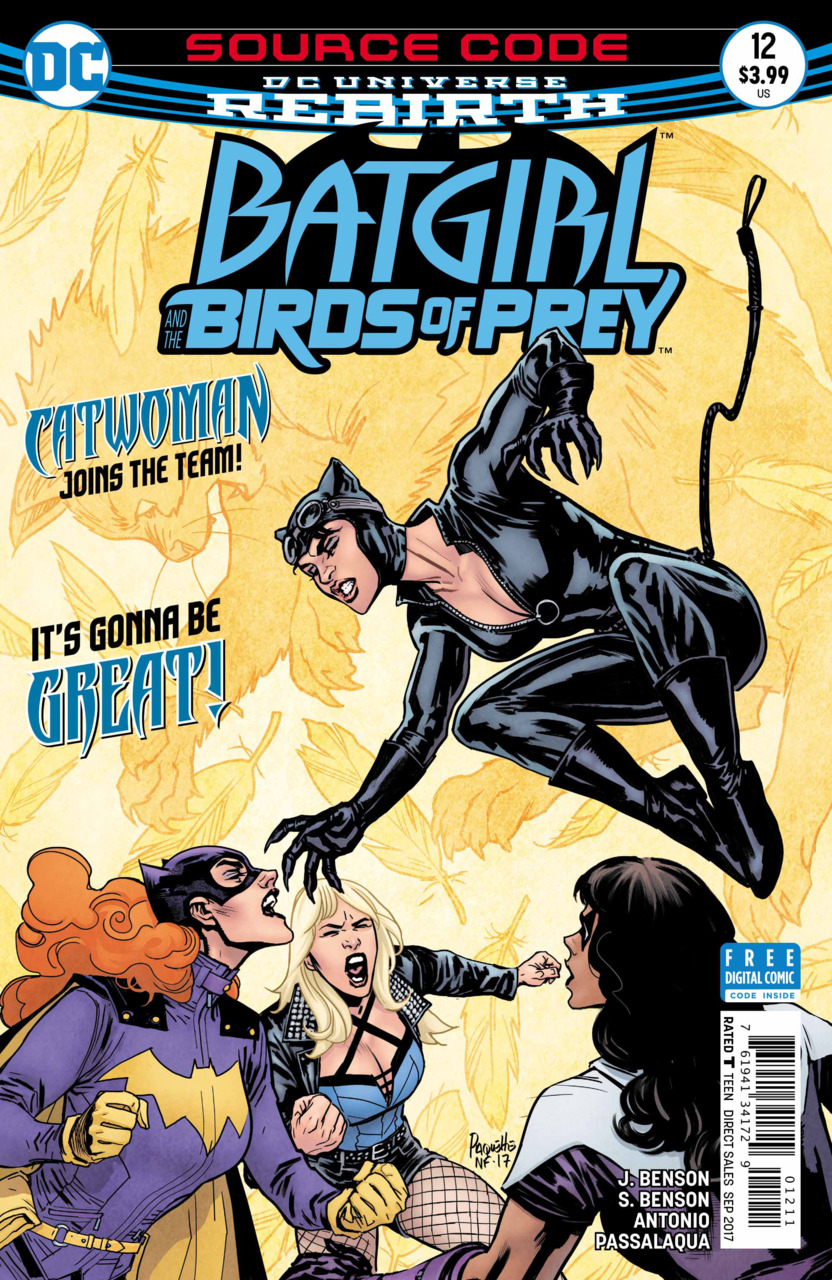 In Brief: Batgirl must seek out Catwoman while the rest of the Birds infiltrate the enemy’s lair, only to find a surprise waiting.

Summary (Spoilers): The Birds plan their assault on Terracare to get Calculator’s wife and kids back. Babs and Gus will retrieve what Catwoman stole, while Dinah and Helena go undercover. Babs calls Bruce to reach Catwoman, while Dinah works her way through the Terracare bureaucracy to see the hostages, and Helena infiltrates behind her as a repair worker. Benedict Dillon, the boss at Terracare, meets with Dinah and shows her the terrified Harris family.

Meanwhile, Catwoman meets Bat…girl, thinking it was Batman. She is not pleased, to put it mildly, and the two exchange attacks until Babs mentions Terracare’s hostages, which brings Catwoman to their side. Catwoman meets the Nerds of Prey, Gus and Calculator, and tells Babs that Poison Ivy hired her to steal a vial from Terracare, and the diamonds she stole were just a bonus on the side. Selina lets them know that Ivy has gone undercover at Terracare herself, and Huntress lets the Birds know she sees Ivy beginning to attack in the lab. Huntress and Dinah work to get the building evacuated and the hostages to safety, but Ivy’s vines capture them all, wrapping the entire building in deadly plants as Babs, Selina, Gus, and Calculator arrive.

In Depth: Though this issue doesn’t fall into the pitfall of the Blackbird arc of isolating the Birds from each other in the middle issue, it still presents some significant weaknesses on a lot of levels. The Bensons feel the need to continue connecting the Gotham universe together by throwing in a reference to Selina and Bruce’s romantic limbo, but in doing so, they undermine the trust Bat and Cat have in each other, and the reasoning for Batgirl relying on Batman for help is paper thin. Perhaps a bit more serious, the continued innocence of Calculator proves a bit troubling. These reviews mostly gave the Bensons a pass for giving Gemini a chance at rehabilitation despite being a multiple murderer, but Calculator being a completely passive victim in this arc seems more than a bit troubling, as this series needs to lean harder on consequences to make it a more defining run on this beloved team. The first arc had the sympathetic but still evil Fenice end up in jail, so hopefully this arc will have fallout for both Gus as Oracle and Calculator.

On the plus side of the writing, the Bensons reinforce their continuity grabs with a Gotham City Sirens reference to Catwoman and Ivy’s relationship. Hopefully this approach will continue in their writing of Calculator himself, so that his excellent villain introduction last issue isn’t wasted.

Allen Passalaqua’s colors are still vibrant, and the neon pinks and purples are a fun way to give this a cityscape heist film vibe, but a few things seemed a bit odd. Bruce’s skin tone felt oddly greenish, though that could be the contrast with the background (which is still a coloring issue). While the coloring issues are new for this series, an older technical problem reappears in the lettering. The final page flips Selina and Babs’s word balloons, and Gus and Calculator’s balloons have an awkwardly structure back-and-forth on the same page. Roge Antonio continues to provide strong pencilling with the art team supporting him, but several times the faces feel significantly less polished and assured than he’s done in the past for the series.

Pick up/Pass? This issue feels more like a wait for the trade, as a dip in quality for the middle issue of the arc hits.

In Conclusion: Catwoman and Poison Ivy raise the stakes in an uneven issue.