Review: Batgirl and the Birds of Prey #3 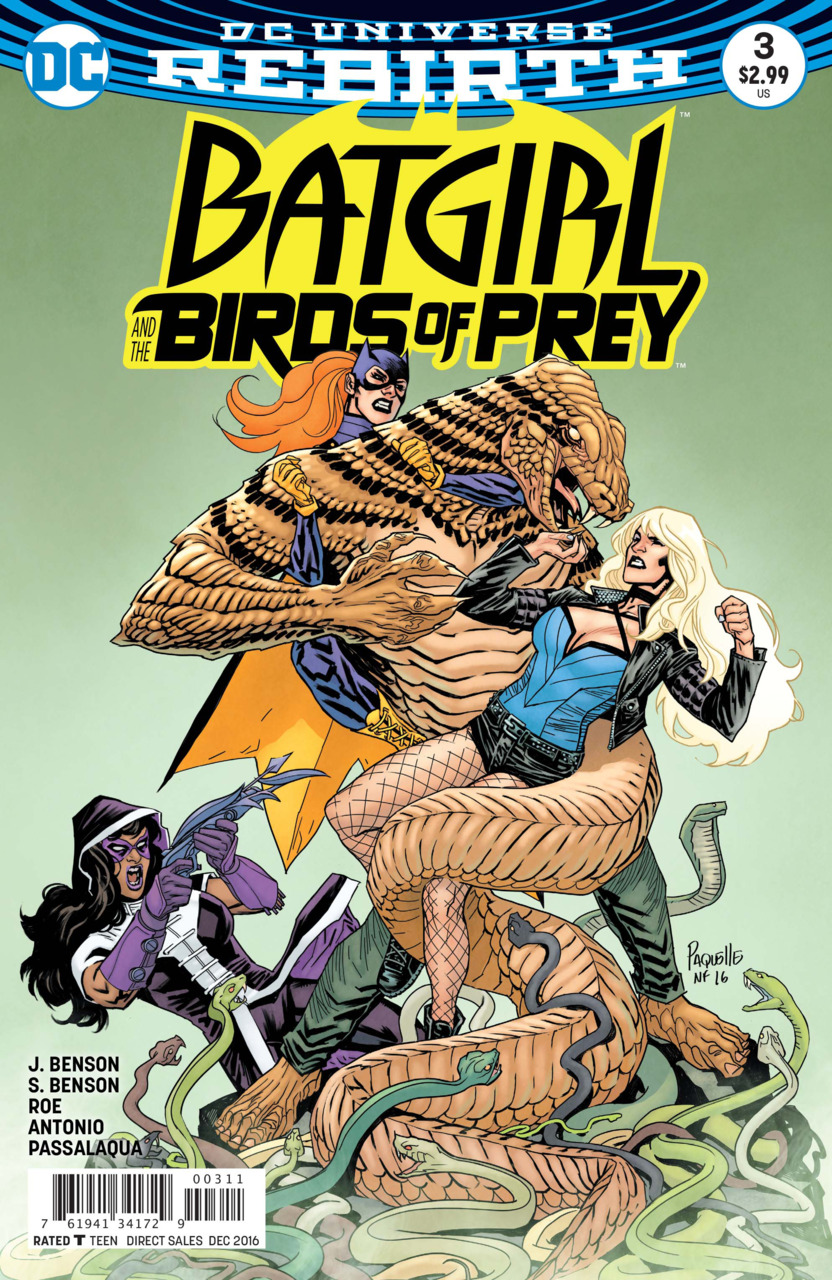 In Brief: The Birds of Prey face increased threat to themselves and their allies in the present, as Dinah deals with her pain in the past.

Summary (Spoilers): Nine-year-old Dinah Laurel Lance, the future Black Canary, stuck in a hopeless foster house, talks to her absent mom. After being thrown into her room by the foster dad, she finally decides to run away.

In the present, Batgirl (Barbara Gordon), Dinah, and Huntress (Helena Bertinelli) give Frankie the information from the server farm they raided last issue. Huntress tells them that “Fenice,” the name of their villain, is Italian for “Phoenix.” While they wait for Frankie, Babs’s realtor tries to break in again, but is foiled by the electric fence Babs installed after the last attempt. Frankie comes through with a decryption, and the team prepare to defend the Dallessandro family at a restaurant.

In the past, Dinah is training with Sensei Lamarr. Her anger and grief over her mother prevents her from reaching her full potential, as a fighter and a person, but her teacher is patient and kind.

The decrypted message turns out to be a distraction – the Birds break in on a mob meeting, but Oracle sends a text mocking them and tipping them off that Fenice’s snakes are attacking the safe house with Babs’s father and the mob boss.

In the basement of the safe house, the snake gang have killed two of the cops, and are getting antsy, until Oracle gives the go-ahead. They burst in on Gordon and the mob boss, but just as they are about to kill Gordon’s third team member, the Birds burst in through the window (second that night!)  Lady Viper, who can transform her lower half into a giant snake, captures the mob boss, while Huntress shoots the snakey villain attacking Gordon. Babs is furious at the use of lethal force, leading to Huntress quitting the team.

Flashing back, Dinah remembers her sensei giving her the first degree black belt for her sixteenth birthday. He tells her if she can let go of her pain from being abandoned by her mother, she will be a sensei herself soon. Dinah is finally able to heal, and when she does so, her Canary Cry manifests itself for the first time.

In the present, Dinah tries to stop Huntress from leaving. Babs runs after them to apologize, but Huntress rejects the Birds’ offer of family and rides off on her bike.

Meanwhile, Fenice reveals herself to the mob boss, who recognizes her as someone thought long dead.

In Depth: Julie and Shawna Benson manage to continue their successful blending of new 52 past and post-Crisis history with their run on the Birds of Prey. This time, they delve into the backstory of Black Canary. Though they’ve kept Dinah’s kind sensei Lamarr from Birds of Prey and her Secret Origin, he calls her Siu Jerk Jai, “Little Bird,” a note from Gail Simone’s history of Dinah and her sensei in the old continuity. The flashbacks, though perhaps created out of necessity to complete the book with a secondary artist, provide a moving counterpoint to the fast-paced action of the present day storyline. Roge Antonio, who provided art for the last few pages of the previous issue, provides incredibly appealing and moving images for Dinah’s backstory.

For the present storyline, Claire Roe continues to draw the Birds as incredibly strong and striking. Though many reviewers and readers have bounced off of the art, I’ve really enjoyed Roe’s work. She seems weakest at drawing direct facial expressions, but her profiles and quarter-turn panels are very appealing. Her grasp of body language also highlight the Bensons’ skill at writing relationships. Helena’s stiffness and anger pervade every one of her panels, while Babs and Dinah have an easy comfort with each other. The full-body shots also highlight Roe’s ability to draw exaggerated comedy, ably complimented by Allen Passalaqua’s gorgeous coloring.

Huntress, though the tension between her and Babs builds to a breaking point this month, has some very important notes this issue as well. Her knowledge of Fenice’s name’s origin hints at a possible familial connection, and her conflict over use of lethal force highlights the character’s post-Crisis history in a similar way to Dinah’s nickname. The entire closing scene between the three Birds gives each of them great character moments. Babs trapped between her sense of duty and gratitude for Huntress saving her father’s life, Huntress cut off and angry, and Dinah attempting to hold everyone together with understanding. Though she fails in this case, we can see how her strength will provide the foundation for eventual reconciliation.

In Conclusion: The combination of banter, action, and mystery in the Bird’s’ life continue to be very enjoyable, but the Benson’s skillfully layer in moments of genuine emotion and relationship.