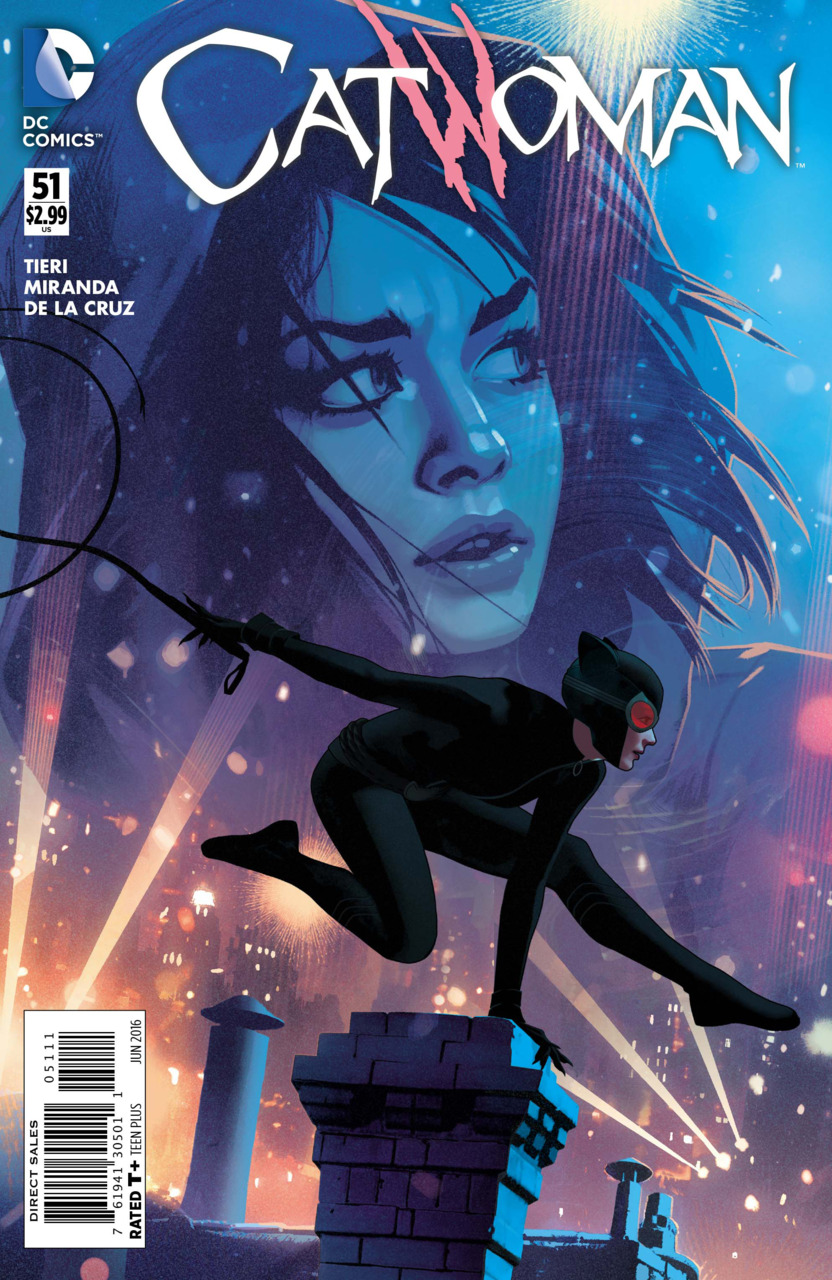 Selina attempts to burgle the infamous Faceless Mask but uncovers intrigue in a secret society that has a long and dangerous history in Gotham in Catwoman #51.

Television news reports that Richard Sionis, the Father of Roman Sionis also known as Black Mask, is dying. He is reported to be involved with secret societies which Catwoman knows is true. Selina breaks into his mansion, through rooms full of Richard’s mask collection and up secret staircases in search of a particular treasure in Richard’s possession.

Selina remembers many years ago her and her pal David used a credit card stolen from Richard Sionis to buy an expensive necklace to be fenced by Louie the Mustache. However, unbeknownst to them Selina and David were being watched.

Back in the present day, Selina makes her way to her goal – the priceless and cursed Faceless Mask. Her thievery is interrupted by the False Face Society’s entrance. Selina has to hide in the shadows while the FF Society, led by White Mask, talk of their plans to use the Faceless Mask to unite their broken organization. Selina has placed a tracking device on White Mask so she can follow the Society as they leave the Sionis mansion.

Selina remembers when she and David turned the necklace over to Louie the Mustache. They left Louie and talked about leaving Gotham if things got too hot for them. Suddenly, they are accosted by men in masks. David is beaten badly and Selina slaps one of the masked men which knocks off his mask. The man is Richard Sionis.

In the present, Selina follows the tracking device she has placed on the Faceless Mask. She recalls that Black Mask hates his Father, Richard, which caused the rift in the False Face Society. But why does the White Mask want to reunite the Society? Selina follows the tracking signal to a tent in a cornfield. She peeks in and sees the False Face Society having a meeting. White Mask presents the Faceless Mask to the group and says that it will unite the factions under his leadership. White Mask reveals his face and Selina recognizes him as her old friend David whom she thought had died.

At the hospital, Richard Sionis calls out for pain killers. A nurse enters and gives him a dose.  As the pain subsides Richard gets a look at the nurse, it is his hated son Black Mask who has given him a drug overdose.  As Richard dies, Roman declares that the False Face Society will be reunited and put under his control. Black Mask has caused some carnage in the hospital and declares that he doesn’t mind if things have to get messy. Until next month…

Writer Frank Tieri is building an interesting story in this final arc of Catwoman. Technically it began in the last issue as one of the three short stories but reading that wasn’t necessary to follow what was going on here although it did include a more complete history of the Faceless Mask. Suffice it to say that the mask has a long and gruesome history from even before Gotham’s founding. Selina is back at her cat burgling best as she sneaks her way around the city.

The art by Inaki Miranda and Elia Bonetti is very clear and helps tell the story in a straightforward manner. They particularly shine as Catwoman slinks around doing her burgling.

The standout feature of this book is the coloring by Eva De La Cruz. The cool and mysterious blues of certain scenes contrast beautifully against the brighter flashbacks. And the background colors at the False Face Society meeting are positively luscious.

I am enjoying Frank Tieri’s run with Catwoman and I will be sad to see it disappear once Rebirth begins. I don’t know much about the False Face Society so I don’t know how interesting they are. I do like stories that deal in the mysterious and hidden history of Gotham so that puts this tale right in my wheelhouse. The more color work I see by Eva De La Cruz the more I appreciate her aesthetic. She can control the tone of the story and keep things changing and moving forward in a way that I really enjoy. I hope that this arc gets a chance to be fully realized so we can give Catwoman the sendoff that she deserves.