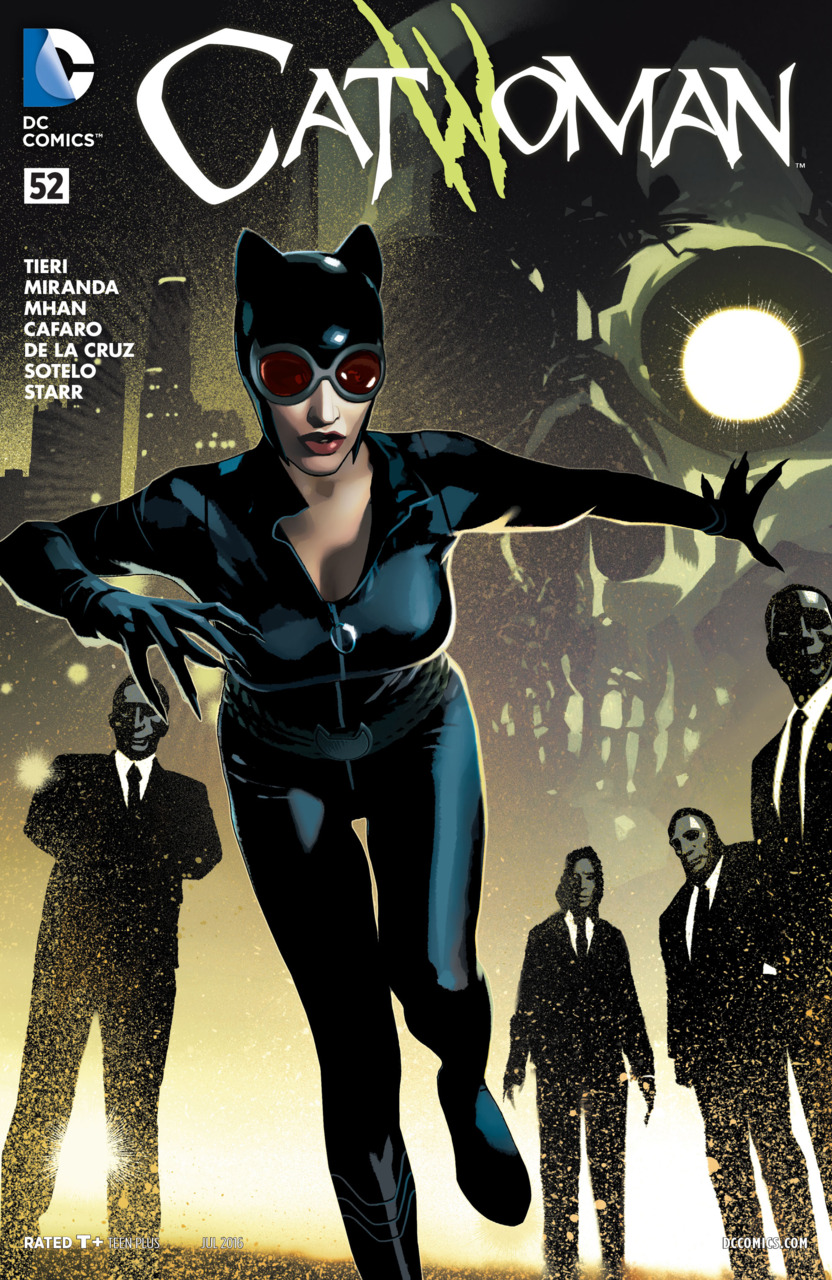 Selina discovers how her ex lover escaped death to rise to the top of the False Face society as the mysterious Faceless Mask wreaks more carnage across Gotham in Catwoman #52.

Tesla has come up empty in her search of information on Selina’s old boyfriend David Franco who is now White Mask. Selina decides to take matters into her own hands and breaks into White Mask’s bedroom and interrupts a private coronation celebration with Mr. Mask and a pair of lovely ladies. Selina disarms White Mask and kicks the women out of his bedroom. She has him unmask and takes off her own disguise. They face each other – Selina and David, two old lovers.

The story flashes back many years to when Richard Sionis captured Selina and David as punishment for robbing him. Sionis tells them that if they steal the Faceless Mask from the Gotham Museum of Crime he will let them go. Selina insists on being paid $30,000 for the crime so she and David can make a life outside of Gotham. Sionis agrees and the pair take off to steal the mask.

Back in the present, Selina’s confrontation with David is interrupted by a trio of False Facers who are enemies of White Mask. They are armed, at least until Selina relieves them of their weapons. David covers them with a pistol but Black Mask emerges from the shadows and has the drop on them.

The story returns to the past with Selina and David bringing the Faceless Mask to the Sionis mansion. David insists on getting more than the 30k they agreed to. Selina tries to get David to stop the foolishness but Sionis’ men shoot David for his faithlessness. As he lay dying, David tells Selina to leave and since she was blameless Sionis lets her go.

In the present, Black Mask tells Selina that his beef is with David not her, she is free to go if she chooses. She refuses but Black Mask tells her that David wasn’t really killed all those years ago. His burst of pretend greed and subsequent fake death was planned by the elder Sionis so that David could take over his European operations as White Mask. Realizing that David went along with the scheme and left her behind Selina leaves him in Black Masks hands. As she rides off on her motorcycle Black Mask realizes the Faceless Mask is gone. Selina rides off into the night with it.

It is sad to see Catwoman go. This is the last issue of a very good fifty-two issue run that boasted some wonderful work. This story, by Frank Tieri seemed rushed. Catwoman is one of the victims of the upcoming Rebirth effort by DC starting at the end of the month and this issue feels like it was trying to wrap up a story in two issues that should have taken at least one more. Even so, we see Selina faced with an interesting choice to either protect a man who did her wrong or leave him to his enemies. She gives in to her anger and sadness and declines to save him. She makes this choice over the course of a few panels where it could have been very powerful if given more space.

The pencils and inks are done by Inaki Miranda, Pop Mhan and Giuseppe Cafaro. Colors are by Eva De La Cruz, Beth Sotelo and John Starr. There are decidedly different styles and color schemes between the pages set in the past versus those in the present which works out very nicely. Both styles have their charms but the vivid colors done by Eva De La Cruz give this issue a gloss that is truly lovely. There are many panels where Selina looks beautiful in this issue and in that the art team have given her a wonderful send off.

I enjoyed Frank Tieri’s run on Catwoman. I thought that the Frost Diamond story was excellent but the wheels started coming off in the oversized issue 50 as the book seemed to struggle with it’s own demise. Even so, I am very glad to have found the coloring work of Eva De La Cruz. I will surely bee looking for both her and Frank Tieri’s work in the future. Who knows, maybe they will give Selina another go.