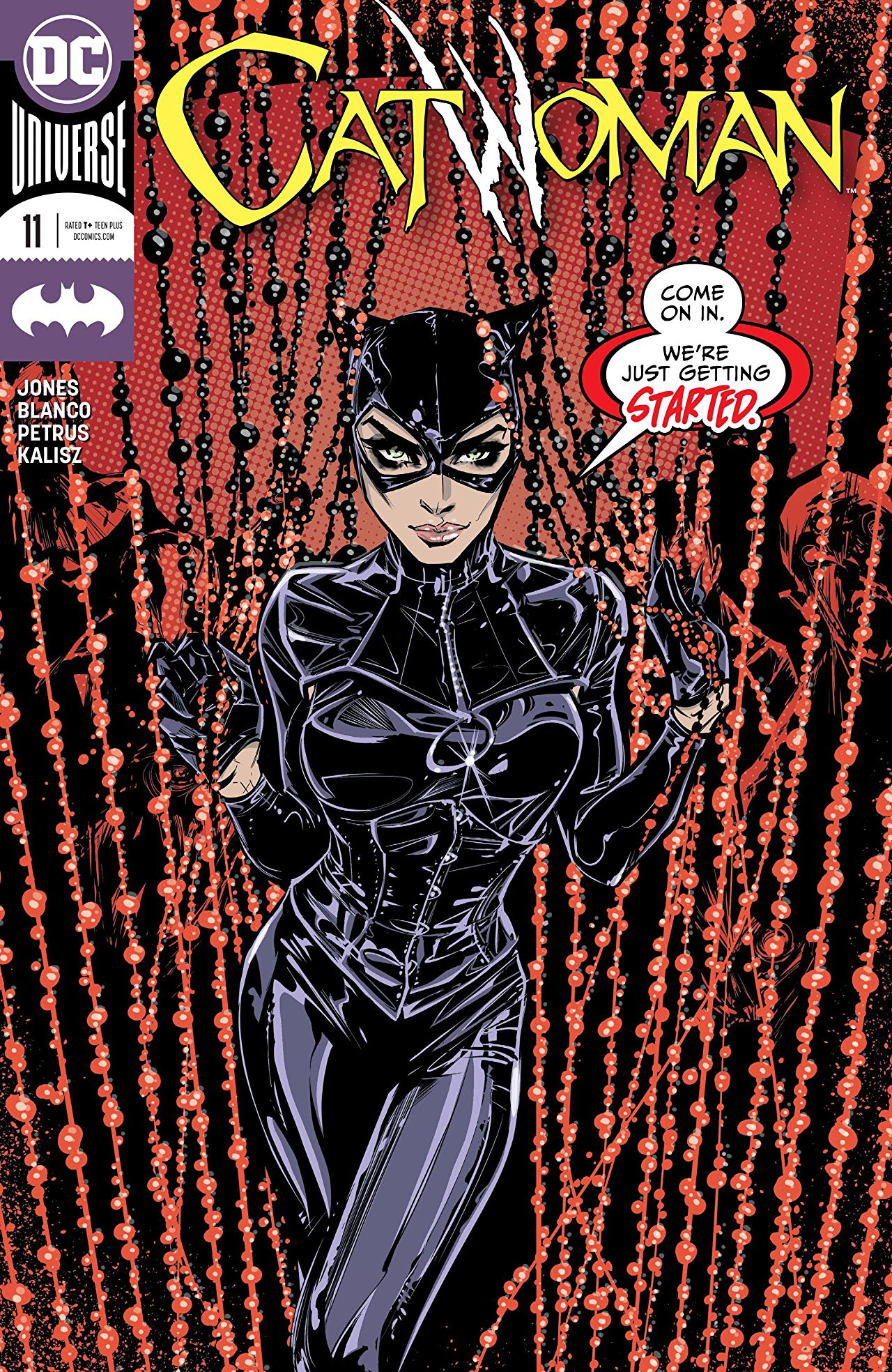 Overview: Catwoman chases a security vehicle in order to rescue Carlos, while Mrs. Creel uses her new weaponized son to blackmail her oldest.

Synopsis (spoilers ahead): The issue opens with the red carpet grand premiere of The Quantum Conjurer, a big Hollywood movie. While the big crowd screams and shouts in the background of the media coverage, Catwoman is giving chase to an armored car where Carlos is being kept. She manages to reach the car and break in just as the big star of the movie arrives at the red carpet. In the process of crashing into it, though, she knocks the driver out. Out of control, the security car drives straight into a police vehicle that was standing guard to the crowd attending the premiere. Catwoman goes flying out of the windshield, ripping the movie billboard.

Somewhere else in Villa Hermosa, Creel is taking her two sons for a ride in her limousine. Except one is a blueish zombie who only mumbles. And the other she is blackmailing to have him keep the police off her tail. He refuses to do her bidding and she unleashes Adam, zombie boy, on his brother for a brief moment. It is all it takes for him to agree with her. The car stops and he gets out, a briefcase in hand containing something that, according to Mrs. Creel, will be “a reminder” to law enforcement that he is his father’s son. As he steps out a new, unknown guy enters the limousine.

Back in the movie premiere, Catwoman manages to take Carlos out of the security car. They run across the red carpet, the police on their tail. They use a police car to escape the scene, Carlos barely managing to keep up with Selina.

Analysis: If fun is what you’re looking for in a comic book, this issue will likely fulfill your desires. However, when it comes to plot development it falls a little short. This is a clear write-for-trade comic, clearly a set-up for some further plot points. A pull of the seam in the middle of the story being sewn.

Mrs. Creel continues being more important to the story than Catwoman herself. Not only that, her character is more appealing and, in a way, better constructed than Selina has been up until this point. Not that Selina is being poorly written, much on the contrary, but Jones’ forte is undoubtedly on the gallows, ironic side of things – just consider her most famous work, Lady Killer, a sweet looking 50’s housewife who kills for a living. Mrs. Creel’s newest feat, turning her son to a zombie, makes them a new kind of duo that could well be called Murder Mom and Zombie Boy, the deadly duo.

While it may not be the most relevant issue to read on its own, Joëlle Jones has some cards up her sleeve that she never fails to use to make the story work and be entertaining. For instance, her recurring use of parallel scenes. In this issue, Catwoman’s action scene runs parallel to a movie premiere. While Fernando Blanco did not go for Jones’ usual tactic of mirroring the poses and panel composition while the scenes share a page, he did a fantastic job conveying the movement and action of the chase scene. His major downfall is how heavy his lines get when drawing faces, a problem even more noticeable when sharing an issue with Hugo Petrus, who’s got a knack for nailing facial expressions with the lightest of lines. Final Thoughts: In a issue that is more connective tissue than limb, Joëlle Jones manages to keep the story interesting by giving Mrs. Creel her own zombie sidekick, if he could be called that. With some minor bumps in the art department, the issue will likely be better read when in trade.