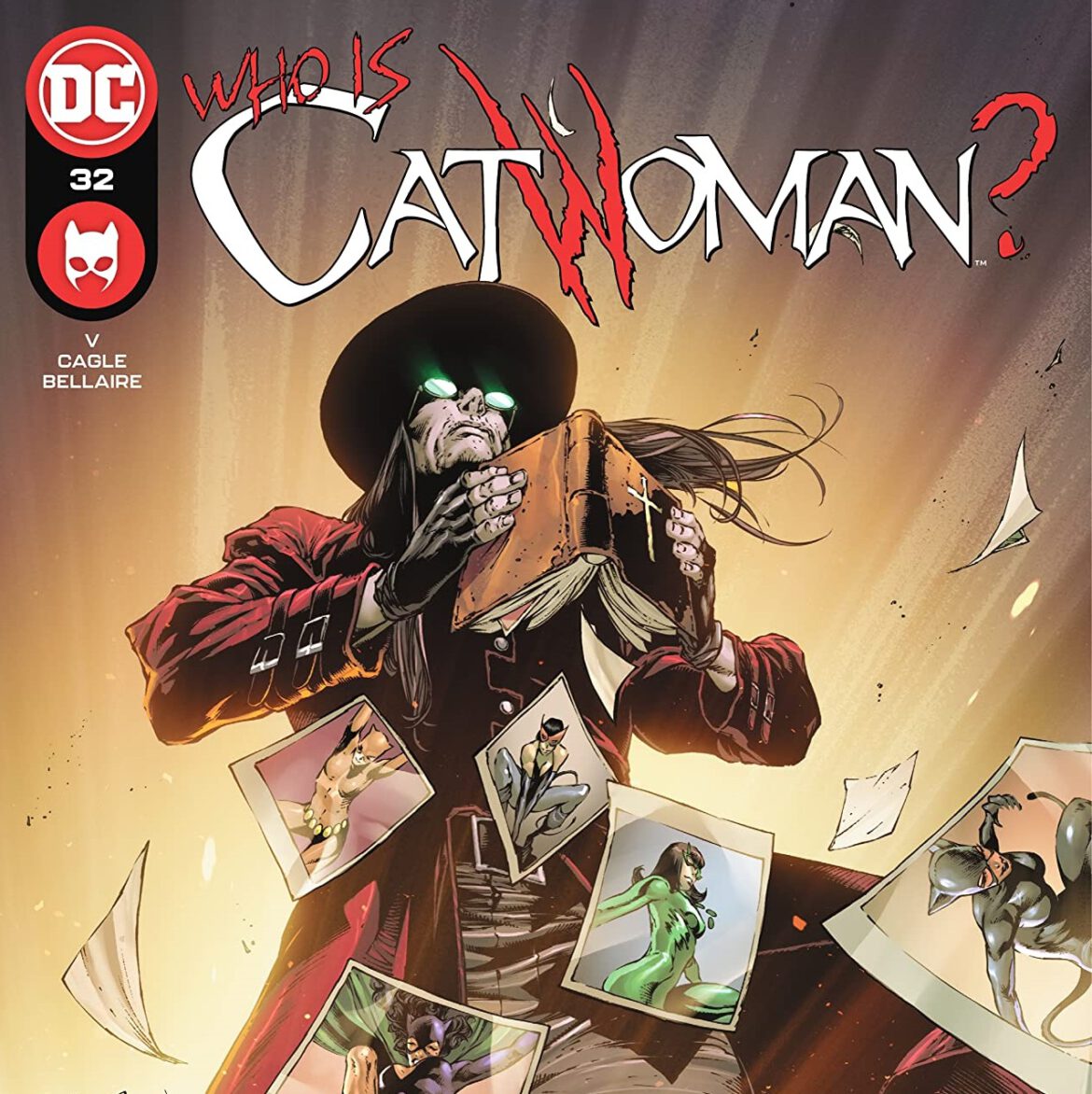 Overview: In Catwoman #32, Catwoman’s history takes center stage as Father Valley and Mayor Nakano’s forces close in on her allies.

Synopsis (spoilers ahead): Catwoman #32 begins as Father Valley has captured Leo Carreras, one of Catwoman’s adult allies in Alleytown, and ruthlessly interrogates him about Catwoman’s past. Leo tells of their first meeting in Sicily, as criminal Frank Baz put together a job to go after Diego Messina, the most ruthless Mafioso in the country.

In Alleytown, the news reports the results of Mayor Nakano’s police initiatives, as the corrupt cops we’ve seen entwined in Catwoman’s adventures roughly interrogate Selina’s strays, and Shoes (revealed in DC Festival of Heroes #1 to be Lian Harper, daughter of Roy Harper and Cheshire) tells them a story of Selina’s days as a child herself, working for Mama Fortuna, getting an entire crew to take through the sewers by memorizing the map and scouting ahead before a job. Shoes warns the corrupt detectives that Catwoman will always be ahead of them.

Leo continues to tell Father Valley of his first meeting with Selina in Sicily, of their job going horribly south, ending many of the crew’s lives, including Frank, the leader, loved by Selina.

Detective Hadley meets Maggie, Selina’s sister, on the roof of the Nest (Selina’s base) in Alleytown, begging for information to help Catwoman, and she tells him her brutal history with Black Mask, and Selina’s rescue and revenge, and warns Hadley to stay away for his own sake.

Leo tells Valley that Selina recruited him after Frank’s death to attack Messina alone, leaving him alive, but humiliated and robbed blind. Valley takes Leo to an alley, sets him free, then stabs him in the gut, leaving Leo believing Selina will come for him.

Analysis: Ram V’s run on Catwoman continues its twisty, passionate look at Gotham’s underbelly with an interesting interlude type of issue in Catwoman #32. Instead of continuing with Selina, Poison Ivy, and Riddler, this issue focuses on the past, related through Selina’s allies to Father Valley, the clear “big bad” in this phase of Ram V’s run, and to the police, corrupt or not, of Alleytown. As mentioned previously in this series of reviews, Ram V’s run will likely read best in trade, similar to Genevieve Valentine’s complex, literary run during the n52/DCYou. The deep supporting cast, complicated plotting, and avoidance of easy signposts to introduce who characters are from previous issues force a reader to remember back many issues to catch all of the threads Ram V is weaving together – but when a reread is performed, every character, every detail has a place. We see how Leo, Selina’s assistant in the underworld, is connected to her as he tells the story of their first meeting while being tortured. The defiance of her young strays, their heartbreaking vulnerability to the adult forces that shape their lives, and their stern defiance in the face of that danger stands out, particularly in the case of Lian/Shoes, coming into her own as a major supporting character after the revelation in DC Festival of Heroes of her identity. The short scene of Maggie telling Hadley to stay away makes it fairly obvious that the stalwart detective is doomed, given how heavily Maggie leans on the catastrophe that falls on those Selina loves in her conversation.

Evan Cagle takes over as guest artist for an issue, as Fernando Blanco takes a break after a very long run of issues as the main artist (though he’s scheduled to be back for the next two issues). I haven’t noticed Cagle before, but he’s a pretty decent match stylistically with Blanco in terms of linework (bold, clean faces and figures, a good sense of style in costumes), but stands out a bit from the normal art (which has been really excellent all the way through), with really challenging and exciting panel layout choices. His Selina and other characters aren’t quite identical to Blanco’s, but they are clearly close enough to match, and he gives enormous flair to scenes like Shoes mouthing off to the cops, and enormous tenderness to the moments of loss we see in Selina’s backstory. If Blanco can’t provide art for every issue, Cagle seems like a more than capable backup!

Robson Rocha joins the Catwoman team to provide the clever and terrifying main cover for Catwoman #32, showing Father Valley making polaroid pictures of Catwoman in all of her costumes throughout the years rain across the page. Jenny Frison’s variant gives us a Catwoman of the 90s, snarling defiance as her wild hair flows freely. Though Frison’s focuses more on our anti-heroine, Rocha’s intelligence in portraying the events of the book’s interiors symbolically – Father Valley delving through Catwoman’s history – makes it a bit more interesting.

Ram V and guest artist Evan Cagle provide a powerful interlude issue of Catwoman, giving us exciting and moving flashbacks of Selina’s history through the voices of her closest allies and family, while setting up for the brutal confrontation between Father Valley and Catwoman.