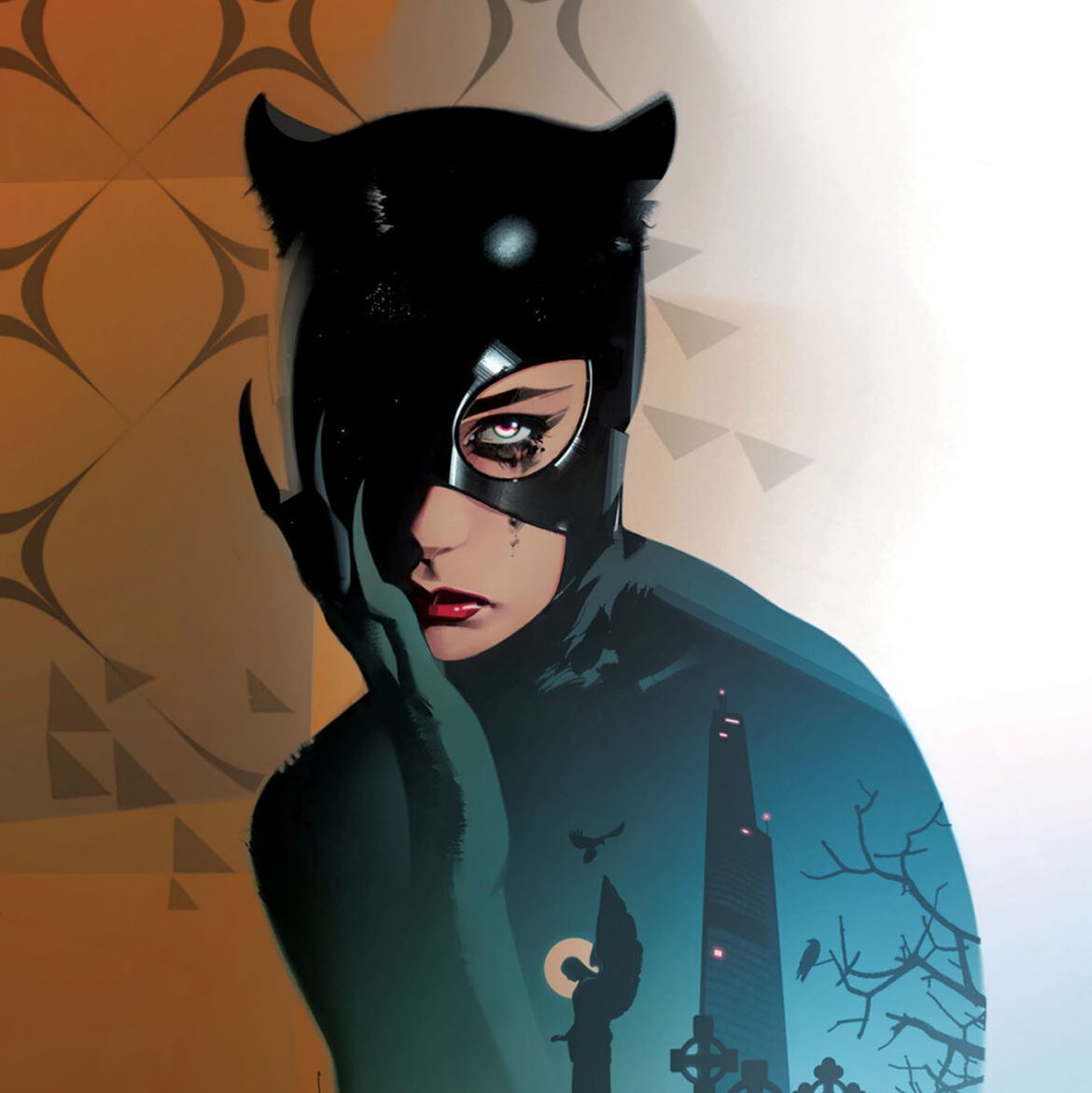 Overview: In Catwoman #40, Selina Kyle finds herself once again over her head as her flirtation with Valmont turns deadly.

Synopsis (spoilers ahead): Catwoman #40 begins with Selina infiltrating the Trixie, the hotel where the mob’s women lounge on the mob’s dime. Unfortunately, she’s too late to save Kristi, the dancer who punched Black Mask in the last issue, and she vows to avenge the murder. To send a message, Selina returns the mobster’s weapons given to her by Valmont. Back at the Trixie, Selina scopes out the Tomassos – the Don, his son Dario, and the son’s right hand or consigliere. She violently interrogates the son, who has planned for such an attack, but Selina evades his traps and uses her knowledge that Dario’s father plans to replace him with his right hand to set her own. She beats Black Masks’s goons within an inch of their lives for murdering Kristi, but Dario stops her before she kills them. Selina discovers that his right-hand man is also Dario’s lover, so the betrayal will be one of the heart as well as of loyalty.

To work off her complicated reaction to this information, Selina cat-burgles herself into a museum to look at a diamond, where Valmont sneaks in behind her and riles her up extremely easily again. They fight and flirt, then Dario’s lover enters. Selina attempts to intimidate him, but he blasts her in the chest with a shotgun. Flashing back to when Hush cut out her heart, Selina wakes up to Valmont stitching her up from the rock salt blast – having killed all of the mob men, including Dario’s lover.

Analysis: After a flashy but inconsistent and frustrating first issue, Tini Howard buckles down to crafting her tale of Catwoman and organized crime in Catwoman #40. The opening sequence of Selina returning the mob’s weapons after Valmont steals them is a return to form – Selina demonstrating competence, with stellar art by Nico Leon – atmospheric, shadow drenched, with perfectly judged colors by Jordie Bellaire showing details like Catwoman’s shadow and Eiko’s gunfire off her yacht. When Howard’s love interest/antagonist original character Valmont shows up again, though Catwoman doesn’t fail as completely as she did in the first issue, the ham-handedly genderfluid Valmont easily evades the master thief, then rescues her from an ill-judged attempt at strong-arming the mob.

The final page reveal that Valmont is much more than an ambiguous rival to Catwoman – he’s a cold-blooded killer, and the jarring shift from flirty to fearsome is well done, but it once again puts Selina in a passive, incompetent position. The callback to a similar situation of passivity from the acclaimed “House of Hush” story by Paul Dini and Dustin Nguyen, with Hush replaced by Batman, Eiko, and Slam Bradley (possibly Jr.), intimating that Catwoman has lost her true loves because she lacks the capacity to keep them (“you’re heartless”) is clumsy and unconvincing (however much you may like Eiko and Catwoman’s flirtation in Valentine’s masterful run, it’s nowhere near as powerful as her connection to Batman or even Slam). Perhaps Howard will earn some of this sell later in the run, but so far, the Eiko/Selina emotional bond has been a lot of telling and very little showing.

Nico Leon’s art has improved quite a bit from the last issue. However, either he or the script made an extremely odd choice when Selina is startled by the alarm during her interrogation of Dario, where she looks comically frightened – a humorous moment, but really ruins the shell Howard was starting to build back up of Selina’s competence, sadly increasing the sense that Selina is inconsistently competent in this run so far. Hopefully, Howard and Leon find a better way to balance the humor and flaws of Catwoman compared to making her an active driver of the story as the run progresses.

Jeff Dekal’s main cover shows a shiny Catwoman weeping, with a cemetery highlighted in the shadow of her body, with a rare example of well-designed cover text indicating the issue’s theme of revenge. Jenny Frison’s cardstock variant shows Catwoman reclining on a crimson couch, playing with pearls, a ludicrously huge diamond ring, and a pretty little white kitten – one of Frison’s more humorous and inventive looking poses and designs for a variant. The 1:25 incentive variant by Sozomaika shows an extremely shiny Catwoman leaning over a balcony, reflections in the dark all around her – quite striking, though a bit generic narratively.

Howard and Leon’s partnership improves slightly, but a few false steps continue to cast Selina in an incompetent, passive light.