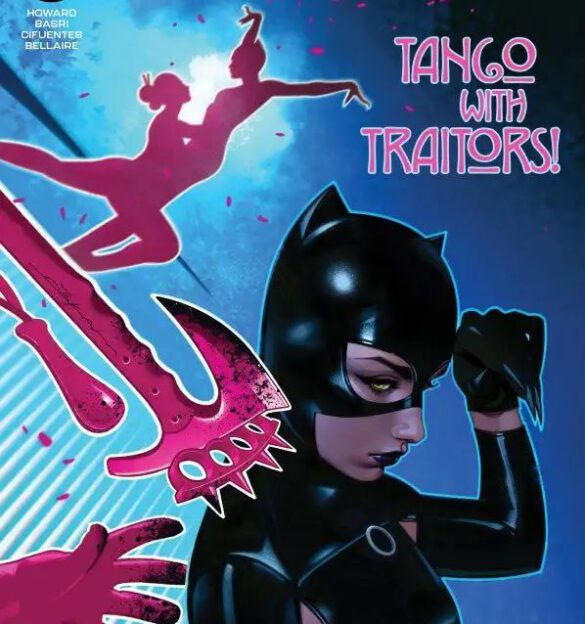 Overview: As Selina’s entanglements with Eiko and Valmont deepen, she prepares to leave Gotham again in Catwoman #46.

Synopsis (spoilers ahead): As Catwoman #46 begins, Selina remembers her relationship and adventures with Batman over the years – a mission against Mr. Freeze, kissing on the rooftop, fighting over her stealing – missing Bruce fiercely.

In the present, Amygdala attacks Catwoman at the behest of Black Mask, and Valmont provides backup against the mob bosses Don Tomasso and Drago Ibanescu. Selina tricks Amygdala into a window and beats him unconscious, feeling sorry for the man for being manipulated, then Catwoman and Valmont flee.

Later, Black Mask presents his plan, along with Amygdala, to the bosses to cut out Finbar Sullivan and Eiko Hasigawa in their explicitly misogynistic plans to kill Catwoman and take over Gotham’s crime.

On Eiko’s yacht, Selina and Eiko flirt, Selina telling Eiko she needs her as an ally too much for them to get involved romantically, and Eiko analyzes Selina’s desire to be undefined and Valmont’s similarity. Selina asks Eiko to retake the docks (to deny Ibanescu entrance for human trafficking) and publically reject her to cement her place with the mob as Selina leaves town again.

The next day, Selina directs Dario Tomasso (her defector from the Italian mob) as she shops with Valmont and plans out their international trip to steal the world’s greatest score.

Black Mask, Eiko, Tomasso, and Ibanescu meet, Eiko pretending to hate Catwoman as much as Sionis. She lures Selina to her yacht and blows it up to prove her commitment to the mob. As Selina and Valmont motorcycle away to the airport, Eiko prowls the highways in her own Catwoman suit, helping to distract the mob from the fact that Selina is gone again.

Analysis: I’ve been quite harsh in my reviews of this Catwoman run by Tini Howard. Part of it is the contrast between Howard’s weak plotting, inconsistent, ineffective characterization, and the careful, complex plotting and characterization of Ram V before her. Part of it is the shallow, unpleasantly preachy tone of Howard’s thematic manipulation. So I want to give credit to Howard where it’s due, and there are two really effective and well-handled elements in Catwoman #46, both of them emotional. First, the flashback opening between Batman and Catwoman over the years, starting with semi-regular fill-in artist on this book Sami Basri drawing an absolutely gorgeous 90s yellow oval Batman and purple suit, flowing hair Catwoman, fading to the Hush years, then to the present – full of genuine emotion (as was Nightwing’s voicemail last issue, which I again want to highlight as a piece of effective writing from Howard).

Because Howard is drawing deeply on Selina’s romantic love for two other characters in this issue – Eiko and Valmont – she wants to make sure we don’t forget Selina’s love for Bruce as well. Like the recent Catwoman: Hunted animated film, Selina reserves the nickname “Cat” for Bruce only, in a nice nod to Tom King, reinforcing the special nature of her love for Batman. There are a few flaws in this opening sequence – the changing costumes and dialogue sometimes aren’t clearly chosen, creating confusion as to how the panels relate to each other in time, and Batman’s stupid reaction to Selina stealing things (as well as Selina’s stupid choice to steal right in front of Batman) creates a clunky note in an otherwise very effective opening – but doesn’t destroy the plaintive melody Howard scores.

The second genuinely well-done element in Catwoman #46 is how Howard turns the page on Eiko’s relationship with Selina. The attraction between the two, first created by Genevieve Valentine, is very nicely handled, and the way Howard has Selina and Eiko close the book on a chance of love together is nicely handled. Again, a few discordant notes can be heard – Eiko’s position as a murdering Yakuza boss doesn’t seem to bother Selina – there’s no indication that Eiko is actually morally better than the other mob bosses – she and Selina just have feelings for each other, so it’s ok. Sure, Eiko prevents the Romanian mob from human trafficking, but what, exactly, is she doing with her own mobsters that doesn’t leave people as destitute? Not to mention Howard has never dealt with Selina banishing Eiko from Gotham after she slaughtered a huge number of gangsters in revenge for her father’s murder. Perhaps Howard will answer these questions later, but so far, it’s a double standard that leaves me, as a fan of Eiko from Valentine’s run, very frustrated. Doubly so, since Eiko’s intelligence and passion are presented in contrast to Batman’s portrayal as being reliable and infatuated, but kind of stupid. That being said, Howard and Basri create an amazing callback to Valentine’s run with Eiko donning the Catwoman costume (looking beautifully like David Messina’s illustration of Eiko), standing on a gracefully arched concrete bypass against the moon, watching Selina leave. That detail, along with the highlighting of Eiko’s tattoo (a big character point in Valentine’s run), shows that even with the dissonant notes, Howard has done fine work here with Eiko as well as with Bruce.

However, one last note – Howard seems to think drawing attention to the fact that Selina is leaving Gotham again after just one issue back makes it okay – “lampshading” the plot incoherency – but it does not. Selina’s plans, as usual, catch her flat-footed (as on the yacht, even though she told Eiko to betray her, she seems ridiculously surprised by the bomb) and make no sense (leaving twice in a row while the mob wrecks havoc on Gotham, without any real goal either time). Despite this failure, the two strong elements of this issue probably elevate it to the best issue of Howard’s run so far – ably assisted by the gorgeous art of Sami Basri, delicate inks of Vicente Cifuentes, and always beautiful coloring by Jordie Bellaire.

Jeff Dekal provides his clean, stylish main cover again, highlighting a care-worn Selina (though her catsuit is still smooth and shiny), with Eiko and Selina dancing in pink silhouette in the background – a very emotional and evocative cover that reflects well the interior story. Sozomaika moves from the incentive variants to the main cardstock variant for Catwoman #46, with a mischievous-looking Catwoman peeking around a wall, with a monochromatic dark and light color scheme. Tula Lotay gives us our incentive this month, with a brilliantly shiny-suited Catwoman leaning against some black pipes and red background, looking a bit trapped by the wires crossing over the foreground. Jeff Dekal returns to provide the August Swimsuit Variant, showing a slinky and dangerous-looking Selina lounging on a beachside couch under an umbrella, her green eyes flashing over rectangular shades. The cool colors and repeated diagonal visual elements in Selina’s costume really make the whole thing pop, though, for my money, the Catwoman on Mikel Janin’s cover for Batman is having a lot more fun.

With just a few out-of-tune notes, Howard provides a ballad for Batman, Catwoman, and Eiko, as Selina leaves Gotham once again, heading towards a deeper relationship with Valmont, with Sami Basri and unusually good craftsmanship from Howard giving this issue its best issue so far from a generally frustrating run.