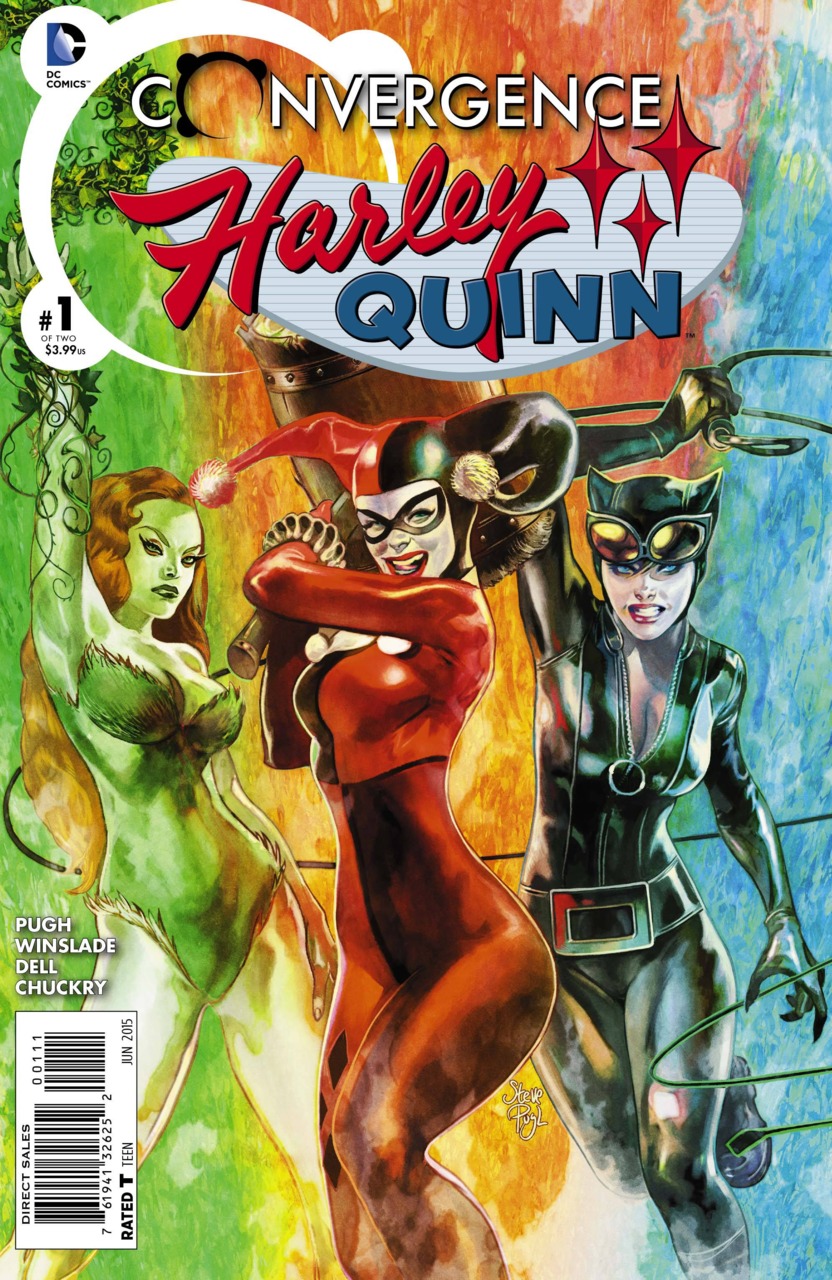 Our story begins with Harley and her gang of baddies and pet hyenas robbing jewel encrusted animal skulls from the Gotham City Museum of Art. The hyenas mistakenly attack the gang which buys time for the GCPD to show up on the scene and fight with Harley and the gang.

The battle is interrupted by a Convergence dome falling over Gotham. The city looks up in terror and confusion. Harley notices how heavy her giant hammer is, she and the other superheroes have lost their super powers.

We fast forward to post-dome Gotham with Harley talking with her psychiatrist about the success of her psych treatment. She lies when she tells him that she doesn’t see visions of the Joker any more. In typical Harley fashion, she is making the best of Gotham being cut off from the rest of the world by the dome. Many others however are having emotional trouble with the isolation.

Harley has been living with a GCPD cop, Louie, who has to help her when she is afraid the Joker is nearby. Apparently she is seeing visions because she is off her meds. Harley has a Joker vision and encourages Louie to distract her.

Meanwhile, some baddies that are taking advantage of the superhero power outage are trying to break into Poison Ivy’s penthouse to steal the booty Ivy has collected over the years. Catwoman shows up to help her fight off the intruders.

Suddenly a voice from the domed sky calls upon the citizens of the world. It is Telos and he calls a champion from each of the dome cities to fight to defend their home world. Telos assigns Harley to fight Captain Carrot. Harley must defeat Captain Carrot or Gotham will be destroyed.

Ivy and Catwoman head over to Harley’s home to find her taking a post coital nap with Louie blissfully unaware of her impending challenge. Ivy and Catwoman dress and rouse Harley who has a violent reaction to the helpful injection Ivy gives her. Luckily Harley has a timely return to insanity and says that she feels hilarious and is ready for battle in the next installment of the story.

I didn’t know what to expect with Convergence when I started reading this comic so I wasn’t sure at first where we were time-wise. The story starts in the middle of the action during a robbery and quickly moves to establish the doming of the city. The effects of the dome experiment on the citizens of Gotham is addressed quickly but effectively: while Harley is visiting her psychiatrist we overhear a group therapy session.

Some of the minor plot points were a little clumsy but all the main beats of the story were effectively handled. It wasn’t clear why Catwoman showed up to help Ivy out against the home invaders other than to get the two together so they could help out Harley. However, Telos’ calling Harley and Captain Carrot to battle is explained well. The book combined a few fun fight scenes, Harley’s character development and what could have been a confusing Convergence narrative into just the kind of lighthearted story we Harley fans enjoy.

I can really hear Harley’s New York accent in her dialogue which I like and her character has just the right touch of zaniness. Also, the Pre-Flashpoint costume she wears is in a few ways preferable to her modern look although I go back and forth on that. Frankly, as long as they get her character right I don’t mind her get-up so much.

The art is effective and clearly tells the complicated story. The final panel with Harley in full insanity mode is very well done. It is simple and stunning and one of my favorite pieces of art in the past few months. Now I am really looking forward to next month’s battle.