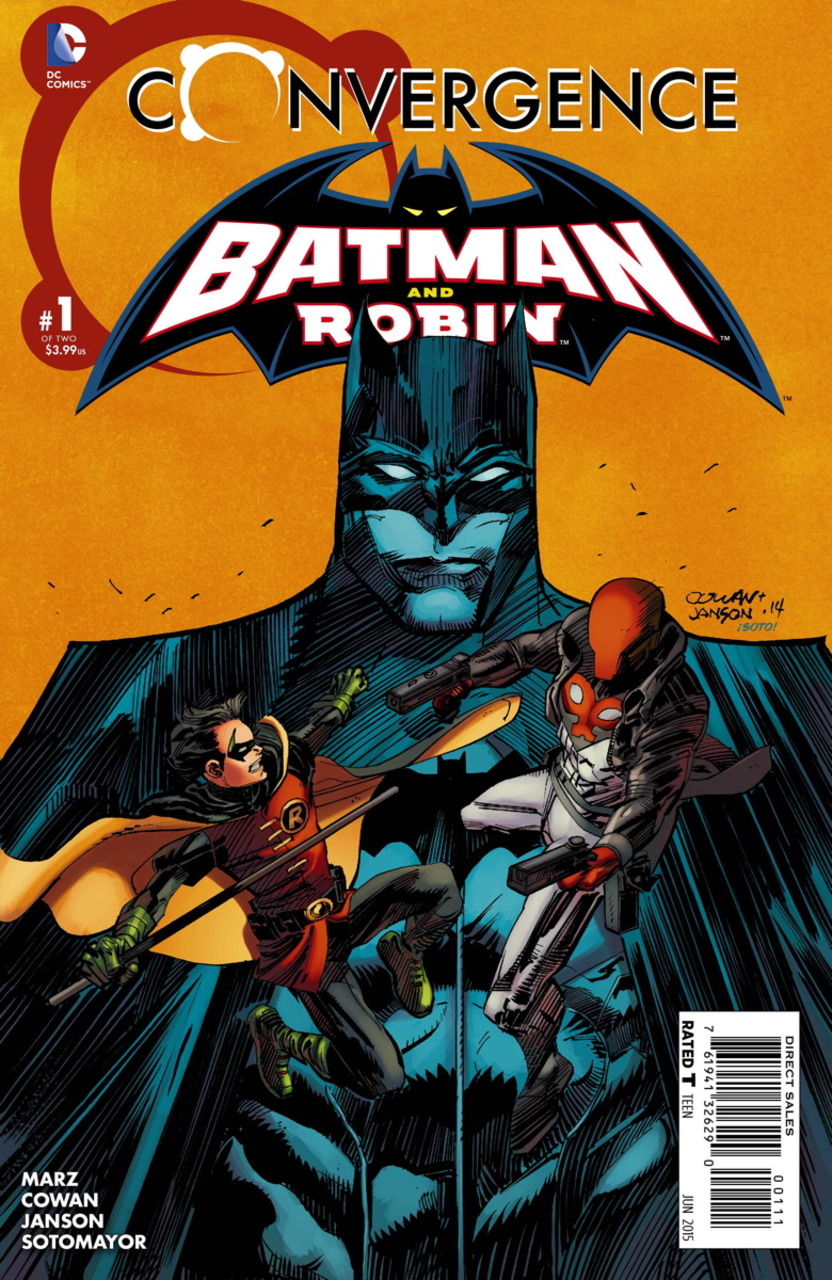 Returning to pre-Flashpoint Gotham City, the story opens with several villains (Black Mask, Mr. Freeze, Penguin, Man-Bat and Killer Croc) confronting Poison Ivy. Penguin attempts to threaten Ivy into turning a profit (for himself) on the food that she has been growing in Robinson Park since Gotham was sealed beneath the dome. As Penguin gives the order to seize the villainess, Batman and Robin arrive in their flying batmobile and Damian leaps from the car and attacks Man-Bat. As Ivy falls back to the ground, Batman swoops in and catches her. The two heroes engage the villains and manage to incapacitate them, when Red Hood suddenly arrives and delivers a kick to Killer Croc as he is about to take a massive bite out of Batman. As Damian wonders why Red Hood has suddenly shown himself, he grabs a hold of a descending ladder. Scarlet is shown to be piloting a helicopter, and the two fly off.

As Ivy thanks the heroes, Batman notes that he will have the GCPD station guards at the entrance of her garden as to prevent another attack. Back in the batcave, Damian appears to be upset over Jason Todd’s return…and Bruce attempts to reason with his son, which doesn’t go over too well. As Alfred arrives with a plethora of bandages, Batman wonders if Jason’s return may cause a rift between himself and Damian. Later on, Bruce is standing before a portrait of his own father and he comments that he never got to learn how to be a dad…since he lost his at such a young age. He worries that Damian may have too much of his mother in him, however these thoughts are put aside as the batsignal lights up the sky. Alfred arrives and informs Bruce that a batmobile is missing and that Damian is nowhere to be found inside the Manor or the cave.

We then cut to a Gotham rooftop where Robin is in a heated battle with Red Hood as Scarlet looks on. The two fight for several panels before Batman arrives and intervenes, Damian then comments that he wonders which person he had arrived to save. It is in this moment that Telos’ message is broadcast throughout the domed cities where he speaks about the various worlds that inhabit his planet and how they have each been chosen to engage in combat with champions of another world. As the message finishes, Batman and the others prepare for combat as they also question what they just experienced…however everything is cut short when a group known as the Extremists arrive.

I have to say that I have been enjoying a lot of the “Convergence” storylines that have popped up this week…from the main story, all the way down to the various tie-ins across the Multiverse. This story was no exception. I really liked that we got back to a classic Bruce and Damian team up story, with a little Red Hood thrown into the mix. Although I found it a little stale for Damian to be greatly mistrusting of Jason Todd, I had to remind myself that at this point in time Jason had just finished attacking both Damian and Dick Grayson (seen back in Grant Morrison’s run of “Batman and Robin”) and has had no reason to gain his trust or respect. I also liked that we saw Scarlet who was introduced as Red Hood’s sidekick of sorts.

I also liked that Bruce was having a difficult time with Damian; we get to see his hesitation over his actions…after all, in this reality he has only recently returned from time traveling and hasn’t had much in the way of team-ups with his son. I also like that “conversation” he has with his dad’s portrait…kind of hits the point that he doesn’t really know how to be a father, since he lost his early on.

Overall I liked this story…we touched on a bit of how Gotham has been surviving underneath the dome (thanks to Poison Ivy) and we got some Bat-Family drama between Bruce and two of his sons. I am interested to see what will happen with these Extremists that show up on the last panel…from my research, this team of villains hails from Earth 8 and were encountered by Jason Todd during his search for Ray Palmer in the pages of “Countdown to Final Crisis.”