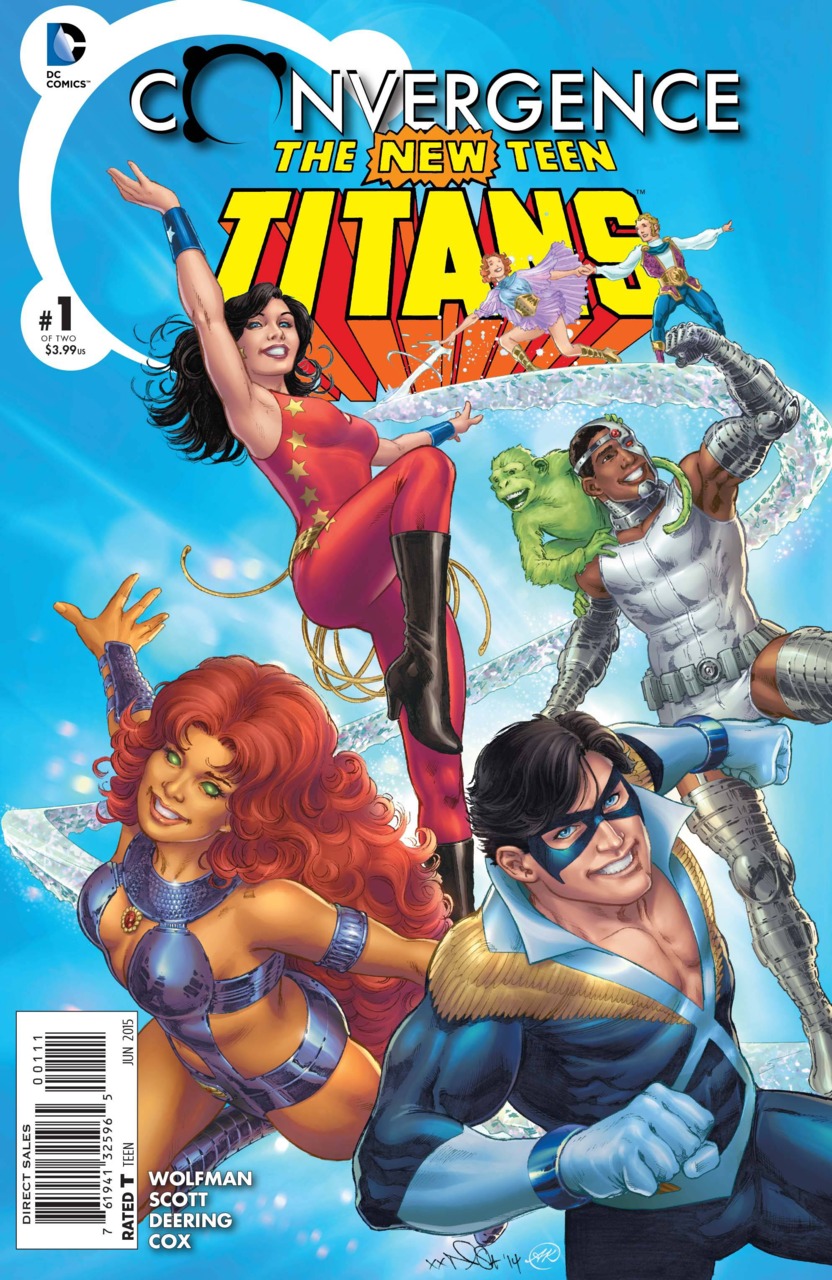 “Opposing Truths” opens with Donna Troy, Wonder Girl recording a message to her husband at what appears to be the base of operations of the New Teen Titans, S.T.A.R. Labs. It is day 365 since Gotham of the Pre Crisis era was cut off by the dome. Overall crime is down and Donna credits Nightwing’s surveillance system. Donna also says that the Titans have not been getting together as often and they have been pairing up in “one way or another”.

One such pairing is Nightwing and Starfire. They are using jet wing packs to fly in the skies over Gotham. Nightwing calls Donna reporting that they are over the diamond exchange where there had been a botched robbery. He wants Donna to alert Gordan that there are casualties and he and Kory are in pursuit. Donna pinpoints the perpetrators location and Kory attacks with Nightwing calling after her not to kill. Kory opens fire on the robbers.

The scene shifts to another dome this time Central City of the Tangent Universe. We see another team attempting to breach their dome. This team are time travelers from the future that traveled to their past to save their future. Just then we hear Telos’ message about the domes coming down to reveal that the cities are no longer on their worlds and in order to save their city, they must fight champions from other cities. We see the images of the New Teen Titans revealing that they are this team’s opponents.

Back at Gotham, the Teen Titans witness the same display. Starfire and Nightwing see the images of the Central City team. With the dome down, the teams’ powers returns. Starfire now fully powered ditches her jet pack and moves to attack the robbers. Dick pleads with her not to kill. Starfire reminds Dick and the readers that as a child she was sold into slavery and vowed that she would not be controlled by another again. She also reveals that she and Dick have been married for six months. She leaves without killing the robbers, Dick lands and presumably arrests them.

We return to Donna who is contacting Gar Logan, the Changeling. She is asking about Cyborg. Gar reports that the promethium that powers him is constantly regenerating however the molybdenum cells that hold the promethium are deteriorating and S.T.A.R. does not have the parts to replace the cells. Cyborg appears to be ignoring this situation by keeping himself busy upgrading the power grid.

Back at the base, Kole comes down to talk to Donna. She is frustrated with Joey. It appears they are another couple Donna referred to in the first panel of the book. Back at the power grid we see Cyborg and Gar working to upgrade the power grid.

In Central City, the other team finds that they are next to Gotham on the alien planet. They surmised that the city was not flown to the world they are on, rather it was transported. They decide to look for the power that allowed the transport with the hopes that with that power, they will be able to transport back to earth and presumably their time. They find that the power source is located in Gotham.

At the Gotham power plant the Central City team approaches Cyborg and Gar. The team attacks calling all personnel to leave the area, declaring the plant is now the property of the Doom Patrol. This confuses Gar, who is immediately attacked by Star Sapphire. Cyborg calls the other Titans for backup who are already on the way. Starfire is the first on the scene and attacks the Doom Patrol. Star Sapphire counter attacks just as the other Titans arrive. Gar reveals that he was a member of the Doom Patrol and this team is not the Doom Patrol he knew.   Rampage of the Doom Patrol orders a retreat. Kory wants to pursue but Nightwing tells her to stand down. Nightwing needs to secure the facility while Donna reports that she does not think the Patrol wanted to kill the Titans. Cyborg is losing power, Nightwing orders Kole and Joey to rush Cyborg back to S.T.A.R. Labs while Dick, Donna and Kory draw up battle plans.

On their retreat the Doom Patrol assesses what they experienced with the Titans. They realize that the Titans are from a different universe than they are. Rampage states that the energy they detected did not come from the plant they attacked but rather from the promethium cells that power Cyborg. In order to return to their earth, they have to dismantle Cyborg and use his power cells to create a portal. In order to save their future the Titans and Gotham must die.

At the Doom Patrol’s base of operation, one member excuses herself during their strategy session. Lourdes also known as Firehawk contacts Nightwing. She identifies herself as a member of the Doom Patrol and she needs to talk to Dick. End of Part one.

This is the first issue in the Convergence event that strayed from the set formula I have been noticing. I have been reading all the miniseries and basically for the most part, they are the same. We see the characters adjusting to the dome that took away their powers. We hear Telos’ message, the dome come down, the character’s powers return, and the fight either starts or is about to start.

This is the first time I saw an introduction of the two sides in the first pages of the comic. It is true we spend more time with the Titans, but we actually see the Doom Patrol deal with their own issues in trying to free themselves from their dome. We are introduced to the characters in the Doom Patrol and we see what their motivation is. It is interesting in the end that during the strategy sessions, Firehawk of the Patrol leaves to secretly contact Nightwing. Is she hoping to avoid the fight, we will only see in the next issue.

I liked the art throughout this issue. The art was detailed and it looked like a modern comic.

I appreciated the character development of the Titans. We especially see the relationship of Kory and Nightwing. We see that they truly love each other but their differences are creating a rift between them. We also see Donna act as a sister to Kole as she deals with her feelings for Joey. She even gets in Dick’s face as she tries to get him to deal with his love and differences with Kory despite her own pain at being separated from her own husband.

The battle sequence shows the team work of both the Titans and the Doom Patrol and we get an aftermath of the first skirmish as both teams struggle with what they think they have to do and a desire to deal with the underlying reason for this situation in the first place.

The only issue I have with this issue is the Doom Patrol. Unfortunately I am not familiar with the Tangent Universe. I know of its existence but I do not know the characters that inhabit this universe. As a result, I constantly had to back track to get character names and motivations as I was reading this book. The title is the New Teen Titans however I would have liked to see some more insight into the Doom Patrol of the Tangent Universe.

This series is showing to be one of the better series of this Convergence event.