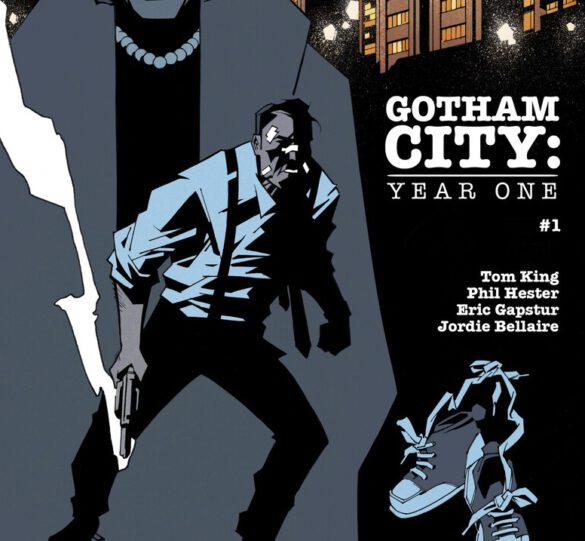 Over the weekend, San Diego Comic Con occurred, and with it came a bunch of news. Part of the news was that several new Batman Universe comics were announced at SDCC 2022. Let’s run down all of the big announcements from the world of comics.

There once was a shining city on the water, a home for families, hope, and prosperity. It was Gotham and it was glorious. The story of its fall from grace, the legend that would birth the Bat, has remained untold for 80 years. That’s about to change. Eisner Award-winning writer Tom King and legendary storyteller Phil Hester team up for the first time to craft the definitive origin of Gotham City: how it became the cesspool of violence and corruption it is today, and how it harbored and then unleashed the sin that led to the rise of the Dark Knight. Taking place two generations before Batman, private investigator Slam Bradley gets tangled in the headline-grabbing “kidnapping of the century” as the infant Wayne heir Helen disappears in the night…and so begins a brutal, hard-boiled, epic tale of a man living on the edge and a city about to burn.

The next series ties into the world of video games as the prequel to the upcoming Gotham Knights game is coming. Batman: Gotham Knights – Gilded City will be a six-issue miniseries teaming writer Evan Narcisse and artist ABEL. The issues will also include codes for in-game items. The first issue hits retailers the same day as the game’s release, October 25.

In Batman: Gotham Knights – Gilded City, a mysterious virus has infected Gotham City—turning its victims into rabid, yellow-irised maniacs driven to looting, theft, and bursts of anger. Batman – in his final case before his death – and his Gotham Knights struggle to keep this strange virus contained while investigating its origins. But this is not the first time this unusual illness has overtaken the city, as the series splits between present-day Gotham City and the Gotham City of the 1800s, as The Dark Knight and his allies discover the Runaway – one of Gotham City’s earliest masked vigilantes.

There were also a few updates for multiple Batman comics series previously announced before SDCC 2022. This includes the Punchline series, Punchline: The Gotham Game, which will be a six-issue limited series by writers Tini Howard and Blake Howard with art by Gleb Melnikov. The first issues will hit retailers on October 25.

The upcoming new ongoing series Batman Incorporated will be written by Ed Brisson with art by John Timms. The series will follow Ghost-Maker and his new put-together team. The first issue will hit retailers on October 11.

And finally, SDCC 2022 wouldn’t have been complete without a bunch of new Batman comic series announced as well. Writer Matthew Rosenberg will team with Carmine Di Giandomenico for a new Joker ongoing series called The Joker: The Man Who Stopped Laughing, with the first issue hitting October 4. Writer John Ridley will be teaming with artist Stefano Raffaele for a new six-issue miniseries, GCPD: The Blue Wall, and the animated adventures of Harley continue with Harley Quinn: The Animated Series: Legion of Bats! It was also revealed that Todd McFarlane will have Batman and Spawn meet for the third time in a new one-shot coming this December. Greg Capullo will join McFarlane for the issue.

So out of all the announcements, which ones are you looking forward to the most?