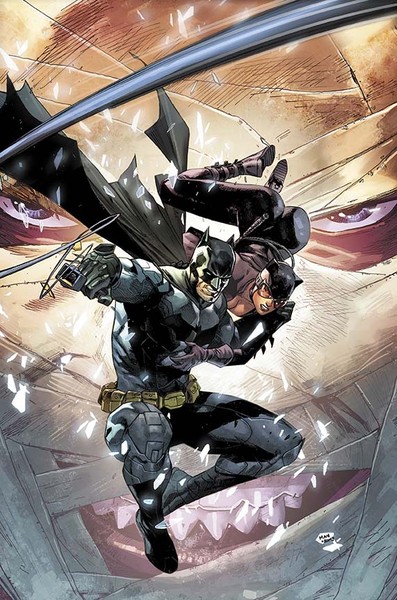 DC has released some advanced solicitations for Batman-related graphic novels and trade releases that will be available throughout the months of July and August of 2015.  Several of these are for collected editions of current and former New 52 ongoing titles (Arkham Manor, Batman Eternal Vol. 2, Batwoman Vol. 6, The New 52: Future’s End Vol. 2, Catwoman Vol. 6, and New Suicide Squad Vol. 1) as well as other collected editions from either outside the New 52 line or from comics that predate the New 52.  Some of these include a trade paperback of the Batman: Arkham Origins comic, a collected volume of Batman: The Jiro Kuwata Batmanga, and a new trade paperback featuring the best Harley Quinn stories across many different titles. Also worth of special not are a trade paperback of Batman: Second Chances where Batman meets Jason Todd from BATMAN #402, 403, 408-416 and ANNUAL #11 and a hardcover Absolute Edition of Scott Snyder’s Court of Owls story (for $99.99).

ARKHAM MANOR TP
Written by GERRY DUGGAN
Art and cover by SHAWN CRYSTAL
On sale JULY 22 • 144 pg, FC, $14.99 US
When catastrophe strikes Arkham Asylum, where will Gotham City house the world’s most dangerous criminals! And when inmates are found murdered, what is Batman prepared to do in search of justice? Find out in this complete collection of the 6-issue ARKHAM MANOR!

BATMAN ETERNAL VOL. 2 TP
Written by SCOTT SNYDER, JAMES TYNION IV, RAY FAWKES, KYLE HIGGINS and TIM SEELEY
Art by JASON FABOK, R.M. GUERRA, FERNANDO PASARIN and others
Cover by CLAY MANN
On sale JULY 8 • 304 pg, FC, $39.99 US
After Commissioner Gordon’s arrest, Batman’s world is turned upside down in these stories from issues #22-34 of the hit weekly series. New allies emerge, old allies fall and his rogues gallery of villains are not quite who they seem. With a new power structure being established in Gotham City amid rising tension and chaos, can Batman adapt to the changing status quo?

BATMAN: THE JIRO KUWATA BATMANGA VOL. 2 TP
Written by JIRO KUWATA
Art and cover by JIRO KUWATA
On sale JULY 8 • 328 pg, FC, $12.99 US • RATED T
Get ready for five more stories direct from 1960s Japan, written and illustrated by Jiro Kuwata. See Batman and Robin take on a new, more deadly incarnation of their shape-changing foe in “The Revenge of Clayface.” Then, the Caped Crusader goes  toe-to-toe with a masked wrestler who has taken his bad-guy act out of the ring in “The Hangman of Terror.” And is it really curtains for Alfred, Batman’s loyal butler, in “The Mystery of the Outsider”? Two more epic tales are included, as well as a 2013 essay by Jiro Kuwata reflecting on his goals from fifty years ago when he was given the chance to bring America’s most popular costumed crimefighter to a Japanese audience.

BATMAN: SECOND CHANCES TP
Written by MAX ALLAN COLLINS and JIM STARLIN
Art by JIM STARLIN, DENYS COWAN, DAVE COCKRUM, JIM APARO and others Cover by ED HANNIGAN and DICK GIORDANO
On sale JULY 15 • 280 pg, FC, $19.99 US
A classic story from BATMAN #402, 403, 408-416 and ANNUAL #11 is collected! When Batman goes into action on his own and meets a young hoodlum named Jason Todd, he’s determined to guide Jason away from a life of crime. These 1988 stories set the stage for the bestselling BATMAN: A DEATH IN THE FAMILY.

BATWOMAN VOL. 6: THE UNKNOWNS TP
Written by MARK ANDREYKO
Art by GEORGES JEANTY, KARL STORY, JUAN JOSE RYP and others
Cover by RAFAEL ALBUQUERQUE
On sale JULY 22 • 176 pg, FC, $16.99 US
In these stories from issues #35-40, Batwoman is neck-deep in danger with her new allies Ragman, The Demon, Clayface and Red Alice! What is going on? And how did Batwoman end up here? Also includes BATWOMAN: FUTURES END #1 and a story from SECRET ORIGINS #3.

ABSOLUTE BATMAN: THE COURT OF OWLS HC
Written by SCOTT SNYDER and JAMES TYNION IV
Art by GREG CAPULLO and JONATHAN GLAPION
Cover by GREG CAPULLO
Advance solicited • On sale OCTOBER 28 • 384 pg, FC, 8.25” x 12.5”, $99.99 US
The explosive “Court of Owls” storyline gets the Absolute Edition treatment, collecting BATMAN #1-11! It all begins when a series of brutal murders rocks not only Gotham City to its core but also the Caped Crusader himself when the prime suspect is one of Batman’s closest allies – Dick Grayson! After a series of deadly discoveries, Bruce Wayne has learned that the Court of Owls is real — and a deadly threat out to control Gotham City!

THE NEW 52: FUTURES END VOL. 2 TP
Written by BRIAN AZZARELLO, JEFF LEMIRE, DAN JURGENS and KEITH GIFFEN
Art by GEORGES JEANTY, SCOT EATON, AARON LOPRESTI, CULLY HAMNER and others
Cover by RYAN SOOK
On sale JULY 15 • 304 pg, FC, $29.99 US
It’s all-out war on Cadmus Island! Plus, the strange new Superman is unmasked, Brother Eye plots the destiny of The Joker, Batman battles Batman Beyond, and the meaning of heroism is redefined for Firestorm. Collects issues #18-30 of the smash-hit weekly series.

CATWOMAN VOL. 6: KEEPER OF THE CASTLE TP
Written by GENEVIEVE VALENTINE
Art by GARRY BROWN
Cover by JAE LEE
On sale JULY 29 • 192 pg, FC, $16.99 US
Meet Selina Kyle – Crime Boss of Gotham City! Spinning out of the events in BATMAN ETERNAL, Selina has accepted the family mantle and embraced her true criminal side, but is Gotham City ready for her reign? And with the Cat away, who’s the stranger haunting the empty rooftops of the city? Don’t miss the start of a bold new direction for Selina Kyle from CATWOMAN #35-40 and CATWOMAN ANNUAL #2.