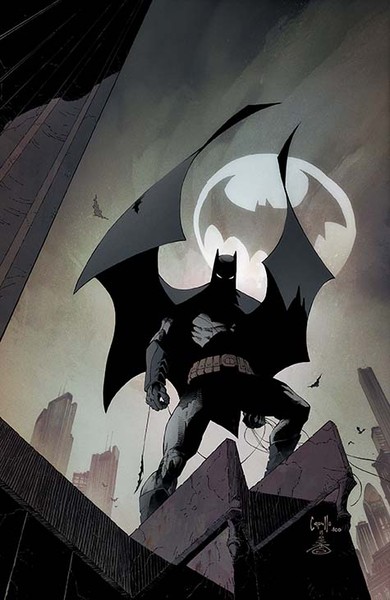 Other noteworthy titles for TBU fans include a new collected edition of the debut stories of Batman and many of his supporting characters in Batman: The Golden Age Vol 1 TP collecting original stories from Detective Comics #27-45, Batman #1-3 and New York World’s Fair Comics #1 for $24.99.  Also, DC is releasing another adult coloring book version of a collected edition, this time of Harley Quinn and the Suicide Squad Vol 1 which collects various splash pages featuring Harley and her Suicide Squad companions.

See the full list of these advanced solicitations below:

BATGIRL VOL. 3: MINDFIELDS TP
Written by CAMERON STEWART and BRENDEN FLETCHER
Art by BABS TARR, ROB HAYES, ELEONORA CARLINI, MORITAT, MING DOYLE and others
Cover by BABS TARR
Batgirl’s about to lose the greatest weapon in her arsenal…because her mind is failing her! Are her ragtag group of allies ready to pick up the slack? And while Batgirl is down, it’s Black Canary to the rescue to discover the identity of a malevolent mastermind menacing Burnside! Don’t miss these stories from BATGIRL #46-52.
On sale AUGUST 24 • 176 pg, FC, $16.99 US

BATMAN ’66 MEETS THE MAN FROM U.N.C.L.E. HC
Written by JEFF PARKER
Art by DAVID HAHN, PASQUALE QUALAND and KARL KESEL
Cover by MICHAEL ALLRED
In this globe-trotting adventure from the 6-issue miniseries, the man from U.N.C.L.E. needs help—from the Bat-Family! Gotham City’s most infamous villains are being recruited by the opposition, and thwarting T.H.R.U.S.H.’s latest scheme for world domination will take the combined efforts of our home-grown heroes and the suave and debonair men of U.N.C.L.E. As these teams venture through Europe, their first task is crashing the evil plot…and their second is maintaining their own secret identities!
On sale SEPTEMBER 7 • 144 pg, FC, $19.99 US

BATMAN VOL. 9: BLOOM HC
Written by SCOTT SNYDER
Art by GREG CAPULLO, DANNY MIKI and YANICK PAQUETTE
Cover by GREG CAPULLO
As the new Batman, former police commissioner Jim Gordon is in for the fight of his life against the bizarre threat of Mr. Bloom, who controls the underworld in Gotham City! At the same time, an amnesiac Bruce Wayne has discovered the truth of his past as the Dark Knight—and now, he must descend into the Batcave and reclaim that painful legacy. Don’t miss the latest helping of Dark Knight tales from issues #46-50 and a story from DETECTIVE COMICS #27.
On sale SEPTEMBER 7 • 184 pg, FC, $24.99 US

BATMAN: THE GOLDEN AGE VOL. 1 TP
Written by BILL FINGER and GARDNER FOX
Art by BOB KANE, JERRY ROBINSON and others
Cover by MICHAEL CHO
These original stories from DETECTIVE COMICS #27-45, BATMAN #1-3 and NEW YORK WORLD’S FAIR COMICS #1 include the origin of the Dark Knight, as well as the debuts of Robin, Commissioner Gordon, Professor Hugo Strange, The Joker, Catwoman and more!
On sale AUGUST 10 • 416 pg, FC, $24.99 US

BATMAN/SUPERMAN VOL. 4: SIEGE TP
Written by GREG PAK
Art by ARDIAN SYAF, JONATHAN GLAPION and others
Cover by ARDIAN SYAF and DANNY MIKI
It’s the Man of Steel’s worst nightmare: an obsessed villain who not only knows all of Superman’s secrets but is also willing to kill anyone who has ever stood by him! No one is safe when the one you’re hunting has no discernible motive or pattern! Collects BATMAN/SUPERMAN #16-20, ANNUAL #2 and BATMAN/SUPERMAN: FUTURES END #1.
On sale AUGUST 10 • 200 pg, FC, $16.99 US

COLORING DC: HARLEY QUINN AND THE SUICIDE SQUAD VOL. 1 TP
Art by AMANDA CONNER, TERRY DODSON and others
Cover by TERRY DODSON and RACHEL DODSON
DC’s Leading Lady is here, leading the Suicide Squad right off the pages and into your heart. Color some of the greatest Harley covers and splash pages-—but don’t forget about Killer Croc, or Enchantress, or Katana, or Deadshot, or Captain Boomerang…
On sale AUGUST 3 • 96 pg, B&W, $15.99 US

EARTH 2: SOCIETY VOL. 2: INDIVISIBLE TP
Written by DANIEL H. WILSON and DAN ABNETT
Art by JORGE JIMENEZ and ALISSON BORGES
Cover by JORGE JIMENEZ
As the fledgling society of new Earth threatens to disintegrate into chaos, can the raw power of the Green Lantern overcome the godlike abilities of Doctor Impossible? And while Batman and his allies fight to keep their city safe from organized crime, Green Lantern and his wonders struggle to prevent the world from descending into all-out war. Collecting issues #8-12.
On sale AUGUST 24 • 128 pg, FC, $19.99 US

HARLEY QUINN VOL. 5: THE JOKER’S LAST LAUGH HC
Written by AMANDA CONNER and JIMMY PALMIOTTI
Art by AMANDA CONNER and CHAD HARDIN
Cover by AMANDA CONNER
At last, Harley Quinn and The Joker come face-to-face in these stories from issues #22-25! Harley’s got an endangered friend to save, but there’s just one problem: she’s got to get through Arkham Asylum first! Unsurprisingly, Harley’s not eager to set foot in the site of some of her darkest hours…and she definitely isn’t ready to face a certain someone who’s laughing at the end of a dark hallway. The life of Harley’s new love, Mason Macabre, is in The Joker’s hands…but can he or Harley survive another round of The Joker’s twisted mind games? Plus: for the first time in book form, it’s the story previously available only to Loot Crate subscribers! In this story featuring art by Amanda Conner, Harley finds a genie in a bottle—and redefines the phrase “be careful what you wish for”!
On sale SEPTEMBER 14 • 144 pg, FC, $24.99 US

JUSTICE LEAGUE VOL. 8: THE DARKSEID WAR PART 2 HC
Written by GEOFF JOHNS
Art by JASON FABOK and FRANCIS MANAPUL
Cover by JASON FABOK
Darkseid is dead! And with the Lord of Apokolips slain by the Anti-Monitor, the Justice League has inherited the powers of gods! Batman, Superman, The Flash, Shazam and Green Lantern have been transformed into omnipotent deities—but will this new power help them in the battle against evil, or twist their personalities? Find out in these tales from JUSTICE LEAGUE #45-50 and the JUSTICE LEAGUE: DARKSEID WAR #1 special!
On sale SEPTEMBER 21 • 200 pg, FC, $24.99 US

INJUSTICE: GODS AMONG US YEAR FOUR VOL. 2 HC
Written by BRIAN BUCCELLATO
Art by BRUNO REDONDO, MIKE S. MILLER and others
Cover by BRUNO REDONDO and ULISES ARREOLA
It’s the shattering conclusion to the year of the gods! In this title collecting issues #8-12 plus ANNUAL #1, the balance of power may be tipped by the arrival of a force that could challenge even the Gods of Olympus. Also, Wonder Woman must make a stand, and the final fate of Ares is revealed. The newest chapter of the INJUSTICE saga is here, as writer Brian Buccellato further explores what takes place before the events of the hit video game phenomenon.
On sale AUGUST 17 • 160 pg, FC, $22.99 US

ROBIN VOL. 3: SOLO TP
Written by CHUCK DIXON, ALAN GRANT and JOHN WAGNER
Art by TOM GRUMMETT, RAY KRYSSING, PHIL JIMENEZ, TOM LYLE, KIERON DWYER and others
Cover by TOM GRUMMETT and SCOTT HANNA
Robin recovers from the tragic death of his predecessor and faces untold threats—all without the Dark Knight by his side. Collects ROBIN #1-6 and ROBIN ANNUAL #1-2.
On sale AUGUST 3 • 304 pg, FC, $24.99 US

TEEN TITANS VOL. 3: THE SUM OF ITS PARTS TP
Written by SCOTT LOBDELL, WILL PFEIFER and GREG PAK
Art by IAN CHURCHILL, TOM DERENICK, MIGUEL MENDONÇA and others
Cover by JORGE JIMENEZ
Just as the team begins to determine its new direction, a mind-wiping demon steals the Titans memories! And when Red Robin goes missing, the teen heroes must save the city and also figure out if they really want their former leader to return. Collects TEEN TITANS #14-19.
On sale AUGUST 24 • 144 pg, FC, $16.99 US

SUPERMAN/BATMAN VOL. 4 TP
Written by ALAN BURNETT, DAN ABNETT, ANDY LANNING, MICHAEL GREEN and MIKE JOHNSON
Art by DUSTIN NGUYEN, DEREK FRIDOLFS, MIKE McKONE, SHANE DAVIS and others
Cover by DUSTIN NGUYEN and DEREK FRIDOLFS
Superman, Batman and the Justice League realize that Kryptonite is a more widespread problem than they believed in these stories from SUPERMAN/BATMAN #37-49. The world’s finest heroes must hunt down what seems to be an endless supply of Kryptonite across the globe—but in order to rid the world of its Kryptonite infestation, Superman may be forced to cripple entire cultures that have grown to depend on it.
On sale AUGUST 31 • 352 pg, FC, $24.99 US

SUICIDE SQUAD MOST WANTED: DEADSHOT TP
Written by BRIAN BUCCELLATO
Art by VIKTOR BOGDANOVIC and RICHARD FRIEND
Cover by CARY NORD
In this solo adventure from SUICIDE SQUAD MOST WANTED: DEADSHOT/KATANA #1-6, Deadshot is on the run, taking on a series of new contracts, and re-establishing himself as the world’s most deadly marksman. But things are about to get complicated for Floyd Lawton when a figure from his past threatens to expose a dark secret…and Deadshot gets word of his next target: Lex Luthor!
On sale AUGUST 3 • 144 pg, FC, $16.99 US