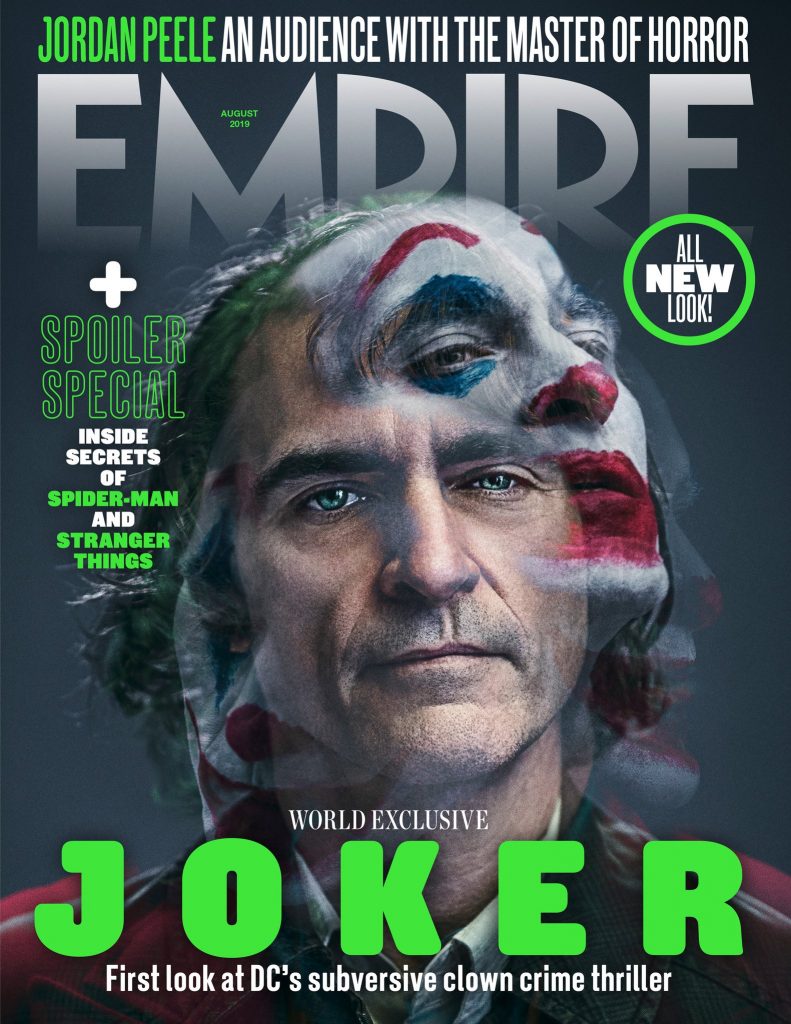 Still riding high on the success of Shazam! earlier this year, DC is breaking new cinematic ground. Characters that we have not previously experienced on the big screen may finally have their day. As expected, details regarding exactly what fans can look forward to are still hazy. Let’s take a look at what may (or may not) be coming to theaters from Warner Bros. and DC. Here is the latest update of all of the announcements and rumors that have released from June 21-July 25. Starting off with projects already on the release schedule, the movie DC fans have been gushing over for the past several months is starting to make its mainstream publicity push. Joker, starring Joaquin Phoenix, was recently featured on the cover of Empire magazine. The image depicted Joaquin, half cloaked in clown makeup, with a somber expression. We also just learned that the film will be part of many international film festivals and Warner Bros. released some new stills from the upcoming film.

Next up is Suicide Squad. According to The Wrap, Storm Reid has been cast as Idris Elba’s daughter for the upcoming film, yet there is no official word on who either Elba or Reid will be playing. More information might be coming sooner rather than later as according to Geeks WorldWide, the next installment of Suicide Squad will be filming from late September to late January in Atlanta.

Moving over to the upcoming Batman film, there has been a number of new pieces of information that have bubbled to the surface. In another report from Geeks WorldWide, we may know when filming will start for the Matt Reeves’ project. After years of setbacks, the production team is hoping to start filming in London on January 13th, 2020. It was also recently revealed by The Hollywood Reporter that cinematographer Greig Fraser will also be joining the crew after previously working with Reeves on the 2010 film, Let Me In. Outside of that confirmation (which Reeves himself confirmed on Twitter), there is one other crew rumor, this one regarding concept artist Ash Thorp who has been hinting at things related to the Batmobile on Instagram.

Apart from Pattinson, not much has been confirmed for the cast of the Batman film, thought multiple rumors continue to state that there will be a multitude of villains in the film. According to Batman-On-Film, Andy Serkis may be up for an undisclosed role which would pair the actor with Matt Reeves again after the two previously worked on the Planet of the Apes films together. Additionally, actress Vanessa Kirby may be considered for the role of Catwoman, according to a report from Geeks WorldWide.

Moving over to projects that have been discussed in an official capacity but are not on the release schedule as of yet, we move over to Black Adam. While nothing new has come up, producer Hiram Garcia spoke with CinemaBlend about the project and had nothing but praise for the confirmed director, Jaume Collet-Serra.

“Jaume is a real talent. He is one of my favorite directors I’ve ever worked with. Not only is he talented, he’s an unbelievable collaborator. He’s an amazing visionary. And what we have in store with Black Adam and for the fans, I am so excited inside. Inside, I take pride as being a fanboy. I started as a fanboy before I became a producer, so I hold onto that DNA. His vision for what we want to do with Black Adam is fantastic.”

Jumping over to the Aquaman side of things, Aquaman director and producer attached to the Trench film, James Wan recently spoke about the project. While speaking to ComicBook.com. Wam stated that the movie will feel more like a horror movie than Aquaman and feature a cast of terrifying monsters.

“We, you know, we’re still deep in sort of crafting the script, crafting the story right now so I don’t want to get into that too much, but definitely it’s one that I really want to lean into the horror of it, so it’s going to play more as a monster horror movie then it will as a superhero film, but it’s still definitely part of the Aquaman world.”

One project that has gone through the wringer since be first announced over five years ago is the Flash solo film. Though previous rumors claimed that Ezra Miller is officially off the Flash movie project, it seems he will be reprising his role as Barry Allen. According to Variety, Miller will begin working on a Flash feature after Fantastic Beasts 3 wraps. There is no confirmation that this info is based on previous connections to the project or if this is an update to prior rumors.

Surprisingly, the darker tone Miller proposed may not be off the table as well. Reports from The Hollywood Reporter claim that It director, Andy Muschietti, is in talks to direct the film. This would be the fourth director or director team attached to the project since being announced. While promoting the upcoming sequel to It at Comic-Con, Muschietti was asked about the film and he stated:

“Oh, I can’t really talk about that… yet…I really want to take a few months off after It Chapter Two and then regroup.”

Now we dive into all of the deep and murky rumors where all should be taken with a massive pile of salt. First up, according to We Got This Covered, actress Hailee Steinfeld is being considered for the role of Supergirl for either the solo film already rumored or another “super” project. The young actress may have stiff competition for the role, as another rumor reports that Elle Fanning is also being considered.

We Got This Covered also recently reported that Warner Bros. execs are considering the possibility of a Swamp Thing film. Supposedly, the movie will keep the same horror-inspired tone of the recent DC Universe show, but will likely include a completely different cast. There is still no word yet on how true this report is. For fans of the television series that had their hopes dashed after it was canceled, it’s a glimmer of hope.

Finally, a pretty major rumor popped up that if true could change the direction of DC Films going forward. According to a new rumor from Cosmic Book News, filmmaker J.J. Abrams is reportedly going to be working on a Green Lantern and Superman movie for Warner Bros. Though details have not yet been confirmed, the rumor has created a lot of buzz among DC fans. Thus far, it appears fans are still divided over whether or not it’s a good time for a new Superman film and are split on Abrams possible involvement.

That’s it for this week’s rumors and news. Visit us soon for updates on these stories and more.