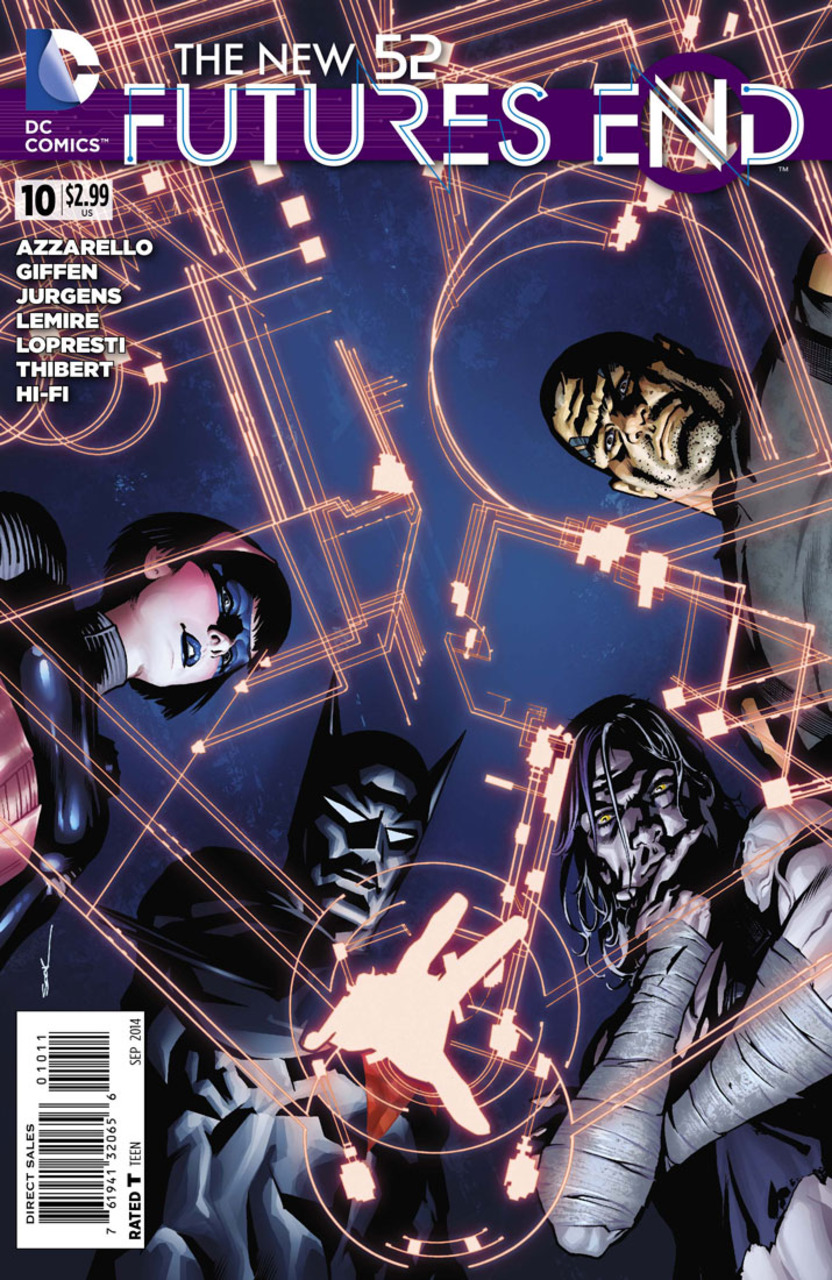 Futures End has been enjoying so far, to say the least. I'm finally back covering this book, and yes, I've been missing it the last few weeks. But this issue does a good job of catching you back up to speed. Majority of the writing continues to be pretty solid. I just can't seem to get into the Grifter story. At least not yet. And that's sad, because he seems to be the main focus right now.

Aaron Lopresti is doing the art once again. I have enjoyed his work on this book, as well as Patrick Zircher. I like how the book has maintained a consistent flow throughout the series, even with a rotation of artists.

Future Superman has stormed into a building, looking for a man named Boyer. Supes is met with an array of weapons, none of which are having any effect on him. Superman threatens to rip Boyer's head off, when he comes across Lois. She explains that the building they are in is Boyer's abandoned building, and that he was the one who informed her that. Superman is uneasy, makes an excuse, and leaves.

Key and Coil have met in the Wounded Duck, still discussing how to break into Terrifitech. Plastique is knocking on her head, trying to see off she has a metal skull. Too awesome. Terry overhears them, and offers to help, showing them the layouts of the building, his plan to infiltrate it. Tim Drake overhears them, and let's Terry know that he recognizes that strategy. Terry and the group leave, and Tim goes upstairs to his room to find Madison going through his things, trying to back Lois' story. Tim gives her a necklace, and they kiss.

We then see what's left of Stormwatch, and although we don't get to see one of my favorite characters (Frankenstein), we see Amethyst and Hawkman having a conversation. Last issue, they removed Hawkman's arm, and placed it onto Frankenstein, and then Hawkman came to. Hawkman is the DC equivalent to Wolverine, and his arm is regenerating. He vows to find who is responsible, and take them down. His emergency beacon goes off, which means someone else from Stormwatch survived… Midnighter & Apollo most likely.

Grifter is still hanging out at Cadmus Island, when he is attacked by an OMAC that is cloaked, so he can't see him. Fifty Sue goes to get him some medical attention, and then they will go play Scooby-Doo. Sounds like an awesome time.

A girl is at a homeless shelter, staring at one of the soup servers. When she gets off work, the girl follows the woman, who attacks her when she gets close. We find out that the girl is Emiko (Oliver Queen's half sister, for those of you who didn't know). She is requesting the woman's help. She needs a hero. She needs Barda. Bum, bum, buuuummmmm….

Pretty decent issue, the last bit has caught my attention more than anything. The Tim / Terry dynamic is interesting, so hopefully they do more there. And then we have Hawkman, and some other members of Stormwatch joining the fray as well. Next week, Arsenal meets up with Jason, the half of Firestorm responsible for Green Arrow's death.