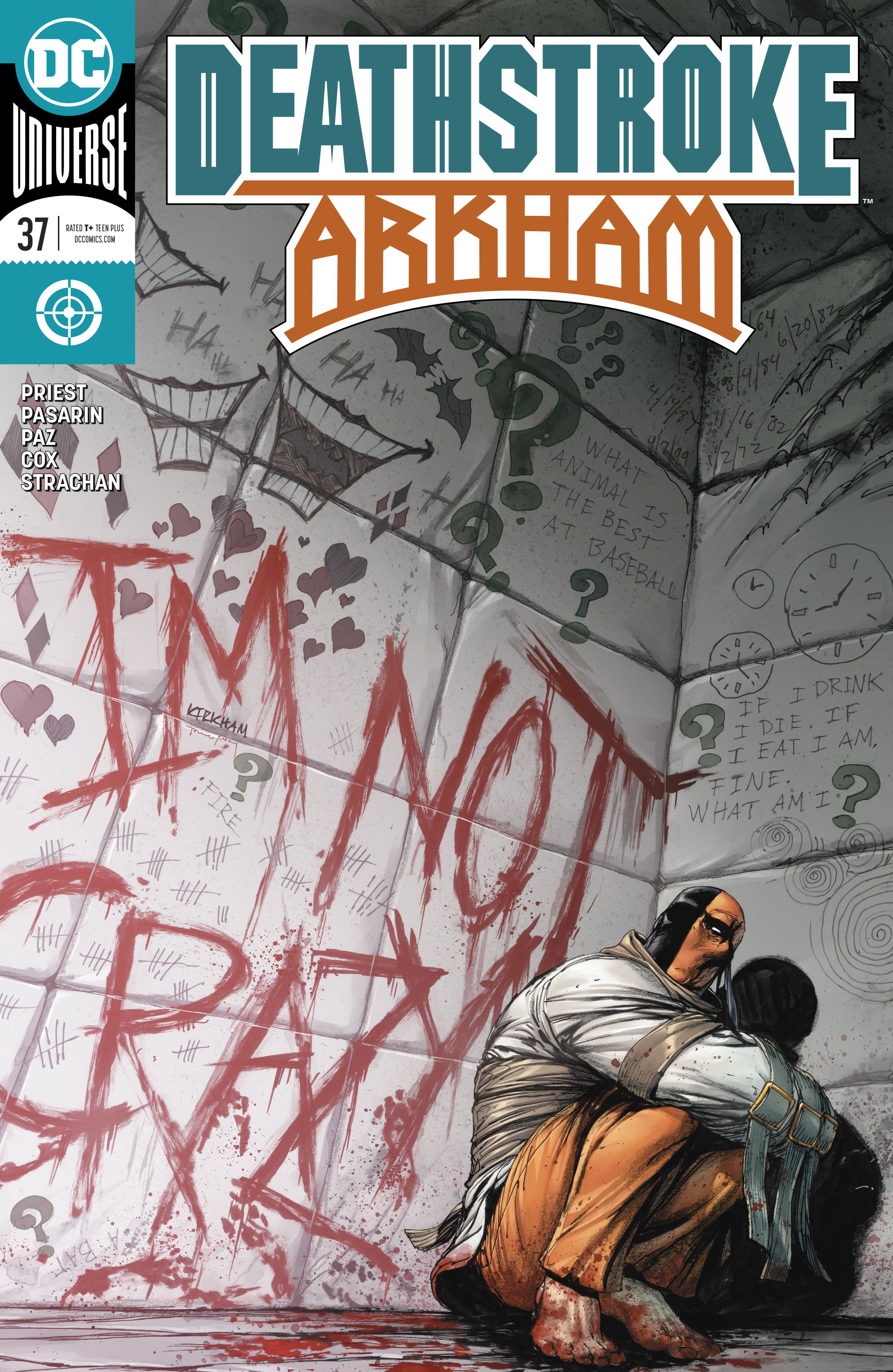 Overview: As Slade slides deeper into the madness of Arkham, his family is swept up by the whirlwind.

Synopsis (spoilers ahead): Slade wakes up on the floor of his cell. Alone. His possibly delusional artificial intelligence implant of Wintergreen remains silent and invisible to his requests for the time. His doctor Candace enters with two heavily armored guards. Slade and Candace trade barbs about sanity and the fantasy of Arkham. Expression confusion at being back at the Asylum after fighting the Pulorian alien race with Devon for two weeks, Slade is astonished that Devon doesn’t exist and that he hasn’t been gone at all. Candace asks Slade to show her how he escaped and explains that every part of his escape plan relies on elements that simply did not happen.

Deathstroke, fully suited, stands over the sleeping Rose Wilson and Hosun. Poking Rose with his sword, he orders her to get dressed. Responding with irritation, Rose gets ready and demands to get paid. Deathstroke stays behind and whacks Hosun with his sword, and reveals that he is actually Joey, after yanking Hosun’s chain by pretending to be Slade. Joey notices that Hosun actually loves Rose, but she views him merely as a way to annoy her father.

Underneath Arkham, Slade and Candace and the guards retrace the steps Slade believes he took. Candace suggests they sleep together, but she knows that she reminds him too much of Power Girl (Tanya Spears), who Deathstroke believes died in the Deathstroke Annual at the beginning of this year (2018). She recounts all of his worst misdeeds, failures, and regrets, and shows him that he could not have escaped the way he thought he did.

Leaping over rooftops with their energy staffs, “Deathstroke” and Rose discuss her struggle with the ancient Hmong spirit “Willow,” who forces her to either wear the warrior princess outfit or run around sans clothing.

In Arkham’s VR therapy sessions, the inmates fight a fantasy mission against Batman in a science fictional facility. Slade resists, but Candace tells him to develop teamwork with the other villains. Two-Face gives Slade legal advice and tells Slade since he tried to kill Batman, he’s one of the group.

Aboard a private jet, Rose and Wintergreen discuss the mission – kill someone on death row before they can be executed. Wintergreen tries to help Rose and Slade connect as a family, but Rose reveals she knows that Joey is wearing their father’s suit. In the prison, she confronts the inmate scheduled to be executed, trying to find out what villain she angered enough to put out a hit on an already doomed woman.

In the virtual reality, Two-Face and Hugo Strange confront Deathstroke. He insists he’s been in Arkham for 23 days, not 22.

“Deathstroke” enters the cell with Rose, who identifies him as Joey, but he punches her viciously.

On the phone with Adeline, Slade’s ex-wife, Wintergreen expresses concern that their plan which put Slade in Arkham is too cruel. Adeline retorts that after Superman and Batman failed to stop Slade, Arkham was the only play left. Wintergreen finds Joey beaten and unconscious in the bathroom of the plane, while “Deathstroke” kills the inmate in front of Rose.

Desperately trying to remember his escape, Slade demands to talk to Two-Face as armed guards break into his cell.

As “Deathstroke” beats Rose brutally, he demands to meet Willow, not Rose, and reveals that Two-Face has been wearing Deathstroke’s suit.

Analysis: After a darkly humorous opening issue of Deathstroke: Arkham, writer Christopher Priest steps up the reality-bending, sanity-testing content in this second issue. While the first issue was titled “The Republic,” asking the question “what is a just man”, this issue is simply titled “Twenty Three”, offering more obscure connections. The surprising appearance of Two-Face both inside and outside of Arkham, tormenting both Slade and his children, provides resonance with both titles – as former District Attorney, Harvey Dent strove to be a just man, but as Two-Face, the double number two (22) appears multiple times in this issue, first as the incorrect number of days Slade has spent in Arkham, and second as the time Rose is hired to kill the inmate on Death Row. His obsession with meeting Willow, a second personality haunting a single body, makes a lot of sense. Two-Face features heavily in upcoming solicitations, as does Hugo Strange, so the questions of Rose’s possession/insanity and Slade’s own questionable grip on reality will continue to dominate the narrative.

Priest writes this issue impeccably, breaking up his usual steady but non-linear pacing with frenetic switches between parallel events in the last half of the book, giving a sense of everything spinning out of control as more and more rugs are pulled from under our protagonists and our own understanding of what’s happening. Fernando Pasarin provides excellent pacing and clarity in the execution of this complicated narrative structure. Though Pasarin’s faces continue to lack the same appeal as Carlo Pagulayan, Diogenes Neves, or the many other artists who have lent their talents to this book, Jason Paz and Sean Parsons on inks and Jeromy Cox and Carrie Strachan on colors continue to provide a sense of artistic continuity with the past issues. The book’s straightforward lighting and fairly bright but not saturated color choices lull the reader into a false sense that we know what’s going on so that when Rose pulls off Two-Face’s mask, our shock mirrors her own.

As usual, Priest also brings thematic and character depth to this issue. Wintergreen and Adeline struggle with the results of their plan and its consequences for Slade’s son and daughter, while Rose tries to balance her fragmenting grasp on reality with a husband who loves her but who she believes is just a prop in her war with her father. Just as no one is clean and pure, no one is entirely villainous. Even Two-Face shows signs of his love for the law and justice as he advises Deathstroke on how to get himself released from Arkham legally. We’ll have to wait and see what Priest’s endgame for Slade’s stay in Arkham means, but for now, he’s provided the usual brilliant exploration of the most screwed up family in the DC Universe with the kind of brutal action a Deathstroke title demands.