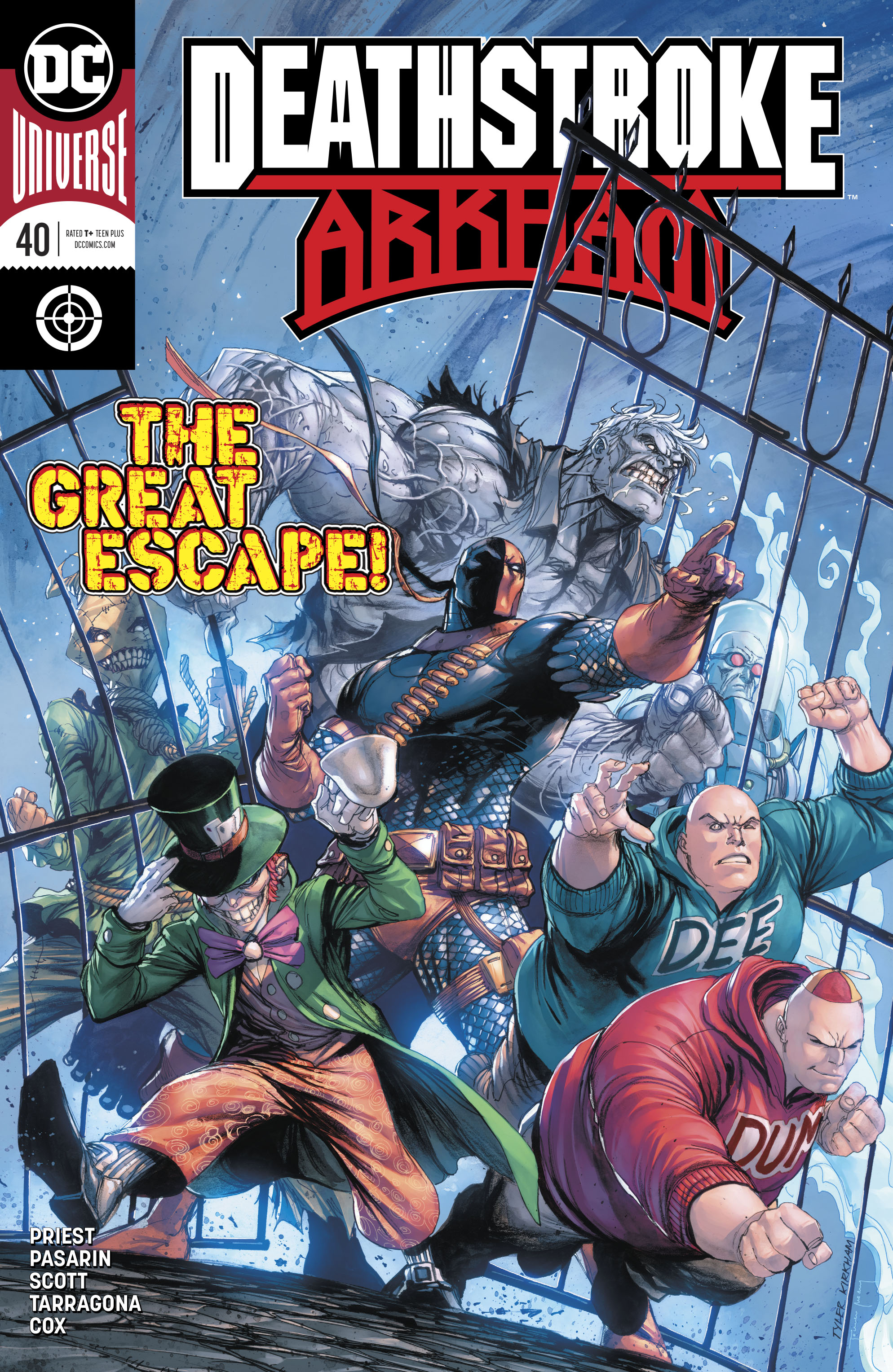 Overview: Deathstroke escapes Arkham in a shower of blood.

Synopsis (spoilers ahead): In Vietnam, Rose lays her sword from the future (revealed in Deathstroke #28) down in a shrine after the ceremony which may cure her of her possession by an ancient Vietnamese warrior princess. She discusses sanity with her kidnapper Two-Face, telling him that though he believes he killed Joseph at the behest of Dr. Strange, the gun he used was loaded with Deathstroke’s paralytic gel instead of bullets. Enraged, Two-Face points his (real) guns at Rose, and just as she did in Deathstroke #29, she faces death, half wanting a way out of the manipulation and violence her life has become, half outthinking Two-Face’s sense of morality.

Lying on the floor of Arkham’s hallways, Deathstroke remembers flashes of his relationship with Candace, his therapist. He gets up and orders his son, Joseph, possessing the body of Solomon Grundy, out of his way so he can kill Dr. Hugo Strange, who he believes is still controlling reality. Mr. Freeze, under Strange’s control, blasts Deathstroke long enough to allow Strange to escape. Working his way past Tweedle Dee and Dum, Mad Hatter and the Ventriloquist, he makes his way to the staff safe room, hoping to find Candace alive, against the predictions of his AI Wintergreen, now accessible again.

Two-Face lowers his gun, realizing that Rose is goading him, and she tells him he lives like a priest – by faith.

As Slade works his way through the steel door of the safe room, Strange explains how Two-Face is apparently dead – he convinced another man he was Harvey Dent, then used surgery to make it look real, to allow the real Harvey to escape and murder his children.

Rose hops on a bus, leaving Two-Face to make his own way in Vietnam. Harvey says he wants to try to take a break from being crazy, and Rose wishes him well.

Strange, using gauntlets like those used by Batman in the last arc (#30-35), fights Slade savagely, gloating that he wants the glory of being killed by Deathstroke. Slade refuses, and Strange shoots himself with Slade’s gun, which is of course loaded with more of the nonlethal gel.

Devon, or Death Masque, urgently reminds Slade of the impending Pulorian invasion and says that he liked Candace too.

On a plane out of Vietnam, Rose calls Joseph, getting the update on her father escaping Arkham.

Deathstroke and Death Masque plunge into the heart of Gotham, finding what they think is the beacon and a Pulorian squad, taking them all out. Deathstroke’s AI thinks the aliens are homeless men. Death Masque is zapped off by a Zeta Beam, and Deathstroke stands alone again.

Later, in Arkham, Damian Wayne, Robin, talks to Wally West, Kid Flash, about Deathstroke’s month in the asylum, and his violent escape. Wally says that the bodies of the “homeless men” have vanished from the morgue. Saying ominously that somebody’s got to do something about Deathstroke, Robin leaves Slade’s former cell, leaving Kid Flash warning him not to let Deathstroke have too much influence in his life.

Analysis: After four issues of mind-bending manipulation, Deathstroke is finally free of Arkham – or is he? While the two major plot points of this arc – Deathstroke’s imprisonment, and Rose’s possession – appear to be resolved at the end of this issue, Deathstroke’s sanity and relationship with his family continue to balance on a knife’s edge. As Priest and Teen Titans writer Adam Glass prepare to smash their protagonists into each other, both of them have unsettled their characters so that the conflict will be sure to reveal the darker sides of their natures.

The five titles of this arc have been “The Republic,” “Twenty-Three,” “Community,” “Simple Man,” and “Reality,” revealing Priest’s preoccupation with all aspects of human life – philosophy, social nature, and perception. Slade, Joseph, and Rose have all struggled mightily with their ethics, their duty to each other, and their grasp on reality – Slade and Rose particularly. The next arc, bringing us to the promised finale of issue #50, will hopefully force all of our protagonists to make the hard choices which will define their paths as heroes or villains – villains definitely in Slade’s case. All of the forty issues that have led us here resonate throughout the issue, as indicated by the copious editorial notes.

Artist Fernando Pasarin has led this arc to a strong conclusion, with assistance in the final few pages by series main artist Carlo Pagulayan. Though Pasarin’s style leans less into the conventionally appealing, the two penciling styles work well together, with fine, detailed lines, and strong attention to artistic beats, the trademark of Priest’s writing style. Colorist Jeromy Cox, perhaps the most defining artistic element of the series, continues to provide subtle yet powerful tones throughout the book, highlighting the absurdity of the alien invasion, the darkness of the asylum, and the horror of bloody violence.

In his Arkham arc, Priest provides hilarity and the blackest of drama, biting social commentary on our mental health systems and assumptions as well as deeply felt human connections. Pasarin and Pagulayan have brought the arc home in some of the most consistent pencils in a landscape of increasing fill-ins, and the Teen Titans crossover “The Terminus Agenda” looms on next month’s horizon. The world is looking bright for Deathstroke fans this year!