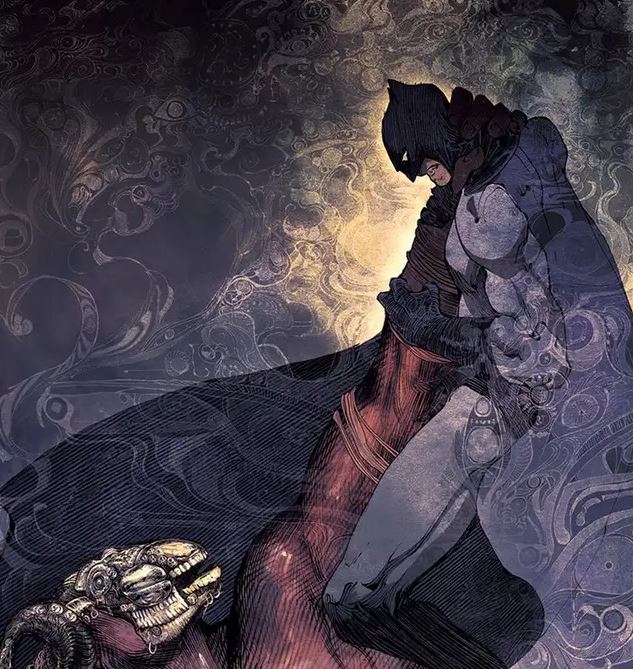 Overview: As the “Overture” of this “Gotham Nocturne” concludes in Detective Comics #1065, the Orgham family takes over Arkham and the underworld as Jim Gordon fights for Batman’s life.

Synopsis: As the main story for Detective Comics #1065 begins, Commissioner Montoya radios for backup at the gang battle at Gotham Harbor over the Orgham Yacht. A man wearing a skull mask with huge horns jumps from an enormous loading crane, landing unassisted on the boat, revealing himself to Orgham’s men as Ubu, the servant of Talia al Ghul, wearing a suicide vest. The triple-gold-pupilled Orgham lady Shavhod says that even with thirty-seven men, the Orghams will easily overpower the League of Shadows.

The Batplane arrives, and Batman plummets down to punch Ubu in the face, takes off his vest, and hurls it overboard. Ubu tackles them both after it into the water as it explodes, and Batman recklessly tazes Ubu in the water. Struggling to the surface, Batman sees the demon Barbatos grab his foot and drag him deeper, blacking out until Jim Gordon dives in to save him. The strange boy from the backup stories helps Jim hide Batman under the docks from the patrolling helicopters and soldiers.

Four hours later, Prince Arzen of the Orgham family relaxes in the Crown Hotel and bribes the executor of the Arkham trust with triple an absurd amount of money to make any trouble he could cause go away.

Fleeing from the Orghams, Ubu is captured by Two-Face, but the coin lets him go, so Harvey turns Ubu over to the Orgham’s wolf-like enforcer, who rips him to pieces. Harvey reflects on whether Harvey or Two-Face is really the villain in the carnage.

At Bullock and Gordon’s PI firm, Jim tends to Batman’s wounds in the dark, so he can continue to refuse to know Batman’s secret identity, explaining it to the strange boy.

Analysis: Ram V. brings the first chapter of his planned two to three-year arc to a close in Detective Comics #1065 with no real conclusion, but simply ending the current conflict and moving the pieces on the board to their next spaces. The Orghams take over Arkham completely using their vast wealth after taking down the assassins Talia sent after them (indicating Talia is against the Orghams – whether or not that makes her an ally or enemy of Batman is another issue). Batman is severely injured after a very cool though short fight vs. Ubu, beautifully rendered by Rafael Albuquerque. Ram V and Albuquerque aren’t even trying to write a realistic Batman story here – drops from multiple stories by Ubu and Batman without any decelerating equipment strain all credulity, but the fun of the drama and beauty of the images sells it for now.

It’s fascinating seeing how Ram V and Simon Spurrier are trading off threads in the storyline Ram V is constructing (this is an assumption – it’s possible Ram V and Spurrier are equal architects of this story, but the fact that Spurrier is writing the backups indicates that Ram V is the main pilot of the good ship Detective Comics). Spurrier brought Jim right up to the place in the narrative Ram V needed him to save Batman, and Ram V continues the cryptic characterization of the strange boy, though thankfully, his Jim Gordon isn’t the obnoxiously stupid and self-destructively drunk Spurrier characterization. The fact that this whole story takes place before Joker #15 continues to be an absolutely boggling choice by editorial – nothing in the story necessitates that chronology as far as I can tell, and the way it seems to set this whole tale further and further in the “past” of the current DC timeline robs the story of its urgency.

All that being said, the overall plot is only slightly clearer – this first chapter is merely the opening moves of the Orgham family’s power play, taking over Arkham and organized crime against the wishes of Batman and Talia, as Batman himself is hampered by visions of the demon Barbatos. Ram V’s voices and characterization are quite compelling – Batman’s narration is quite strong, and his actions generally feel cool, even though he’s clearly struggling and loses quite badly in this arc. Two-Face’s position as an unwilling pawn of the Orghams promises to turn into a full-fledged main narrative in January’s issue. All in all, Ram V’s plotlines – three, as far as I can tell – are all intricately braided ropes, each one with hidden fibers and unknown motivations and forces at work, each twisted into the narrative with skill, hiding what’s to come quite effectively from view.

Synopsis: The backup in Detective Comics #1065 sees Harvey continuing to take over organized crime in Gotham under the command of Gael of the Orghams. Ordered to kill the psychiatrist who “cured” him, he balks, but Two-Face drags him through a trippy mindscape, past the demon the Orghams planted in his brain, past their monitoring equipment, to talk about Batman. Harvey is keeping his knowledge of Batman’s identity secret from the demon so the Orghams won’t know, but Two-Face wants to contact Batman to free themselves of their supernatural captors. Harvey refuses…for now.

Analysis: Having spent three backup stories portraying Jim Gordon as a boozy incompetent, albeit a well-meaning one, Spurrier cedes Jim to Ram V (who does a much better job) and moves on to setting up Two-Face for Ram V’s January issue, showing the struggles of the crime lord as he works for the Orgham’s underworld arm. Much of this issue is spent exploring the crazy dreamscape of Harvey’s mind, drawn with passion and detail by Hayden Sherman and colored by Nick Filardi with a richness that contrasts nicely with the more gray-green-washed look of Dani’s art for the last three issues. Spurrier’s Two-Face is pleasingly bifurcated between Harvey and Two-Face, and the dark emotional tone fits well with Ram V’s book. Editorial is working well to make the content of this book quite consistent, even though this backup plays with tropes this reviewer does not enjoy at all (particularly the “what is real” element that plays through Harvey’s madness).

Evan Cagle’s heavy design (with a carefully chosen frame), almost woodcut-style cover, puts Batman vs. a very scary horse skull demon-type character front and center over the logo. Jim Lee provides the cardstock variant as Batman leaps in front of a huge falling chandelier (very Phantom of the Opera), kicking a falling Two-Face in a tuxedo and golden mask in the face. A black and white pencil version of this cover is the 1-in-50 incentive variant (meaning it’s likely to be at least $50 in your store or online). Martin Simmonds paints a Bill Siekevich-type 1-in-25 incentive variant featuring Batman and Mr. Freeze under a golden arch, both looking at iconic symbols of their quests in bell-shaped containers – a bat in a cage and a red-dressed ballerina. All of the covers demonstrate strong artistry, with DC clearly going all in on the visual lushness for this run of Detective Comics.