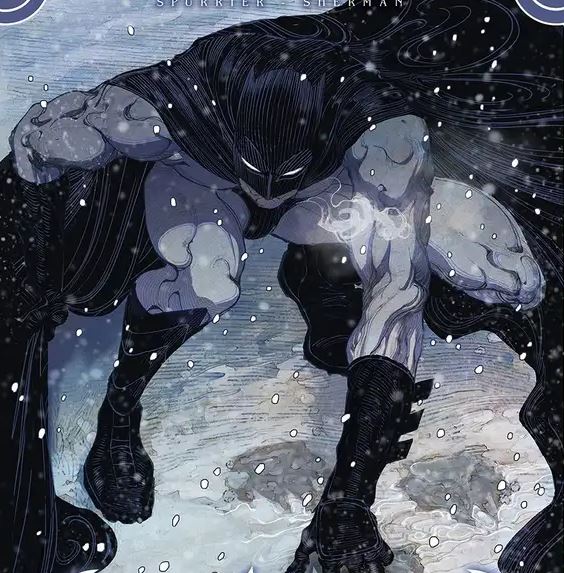 Overview: Recovering from his fight against the League of Assassins, Batman meets the Orghams in both their public and underworld forms in Detective Comics #1066.

Synopsis: Detective Comics #1066 begins three days after Batman saved Prince Arzen from Talia’s League of Assassins at the docks, and Jim Gordon saved Batman himself; he still lies in Gordon’s office, badly injured. Waking, Gordon catches him up, and Batman suits up and vanishes.

Harvey flips and coin and kills a man in his club, telling those watching him Two-Face is back…but the truth is, the coin landed “good” side up, and he’s trying to fake it to develop a plan to break free from the Azmer demon the Orghams possessed him with. His controller, Gael, investigates a power station where Harvey’s men disappeared.

As the Orghams reconstruct Arkham Asylum, Bruce meets Arzen Orgham in front of the site, and Arzen says he wants to work with Bruce to save the city. After Bruce leaves, Arzen’s advisor with creepy eyes, Shavhod, says Bruce is the decayed past and they should destroy him too.

Batman investigates the power station, as Jim calls him about Ubu’s murder by a huge animal. He finds Mr. Freeze at the station, facing off against Gael, who tries to possess him with another Azmer as Batman attacks. Transforming into a werewolf, Gael and Batman trade blows, but Freeze traps both of them in an ice bomb explosion.

Analysis: After the four-issue Overture, Ram V’s Batman Opera “Gotham Nocturne” starts Act 1, as Batman meets the Orgham Prince Arzen. Though solicits say, “Bruce sees potential in the boy,” that seems a lot more definite and clear than the actual meeting in the comic. Though Ram V continues to provide intensely emotional scenes, especially when illustrated by master artist Ivan Reis, returning to the title after providing excellent issues for Mariko Tamaki on this title, so much of what is happening continues to be protean, unformed, as we don’t know all of the plans the Orghams have. The distinctly nasty methods of their henchman Gael, the werewolf who uses demonic power to control Gotham’s villains, indicates that Batman will have his work cut out for him, but the plot moves pretty slowly, with a lot of what’s going on a mystery to the reader as well as to Batman. Perhaps when the whole story is completed, Ram V’s structure and the character motivations will be clear, but for now, we’re trapped in a haze of guesses. Thankfully, the emotional reactions created by the art and V’s strong writing continue to hold interest.

One odd continuity note – Batman didn’t know Jim was back? This explains the note in the Gordon backups that it’s before The Joker #15, but why include such a pointless continuity confusion?

Synopsis: The backup in Detective Comics #1066 sees Two-Face rage as Harvey plays gangster, slaughtering men and trailing Jim Gordon. As he is about to murder his therapist, Dr. Mead, the strange boy Jim Gordon helped attacks, using strange spiritual powers over the Azmer demon inside him. Two-Face finds himself lost in ten-year-old Harvey’s memories of being attacked savagely by Gotham kids. He wakes to find Dr. Mead fled, and Two-Face promises to find out more the next time Harvey sleeps.

Analysis: Simon Spurrier and Hayden Sherman’s “A Tale of Three Halves” reaches its midpoint, continuing the trippy, literally mind-bending tale of Harvey and Two-Face fighting the demon Azmer possessing them. The things Harvey is getting up to are pretty horrific, despite Two-Face mocking them as “vanilla,” especially when rendered by Sherman’s vivid, disturbing pencils and coloring by the great Nick Filardi in garish reds, blood-washed concrete and shadow. Spurrier’s poetic impulse pokes through consistently, a nice touch to a grotesque story. The piece seems to be setting up for Ram V’s Two-Face showcase issue coming up, with a nice bit of coordination.

Evan Cagle’s main cover shows Batman tracing huge wolf tracks in the snow, a clever and baroquely illustrated look at what happens at the end of the issue. J. H. Williams’s cardstock cover, also used in foil variant for the 1:50 incentive cover, shows a skull-headed Batman with the Greek tragedy and comedy masks held in front of him. Kyle Hotz provides a Batman being broken by Bane homage cover for the 90s Rewind program this month, complete with a pink Knightfall trade dress. Colleen Doran’s 1:25 incentive painted cover homages the Death of Icarus classical painting, with Barbara, Stephanie, and Cassandra, the Batgirls, playing the mermaids to Batman’s dead Greek hero – very pretty, though the connections to the current storyline are more than a bit vague.