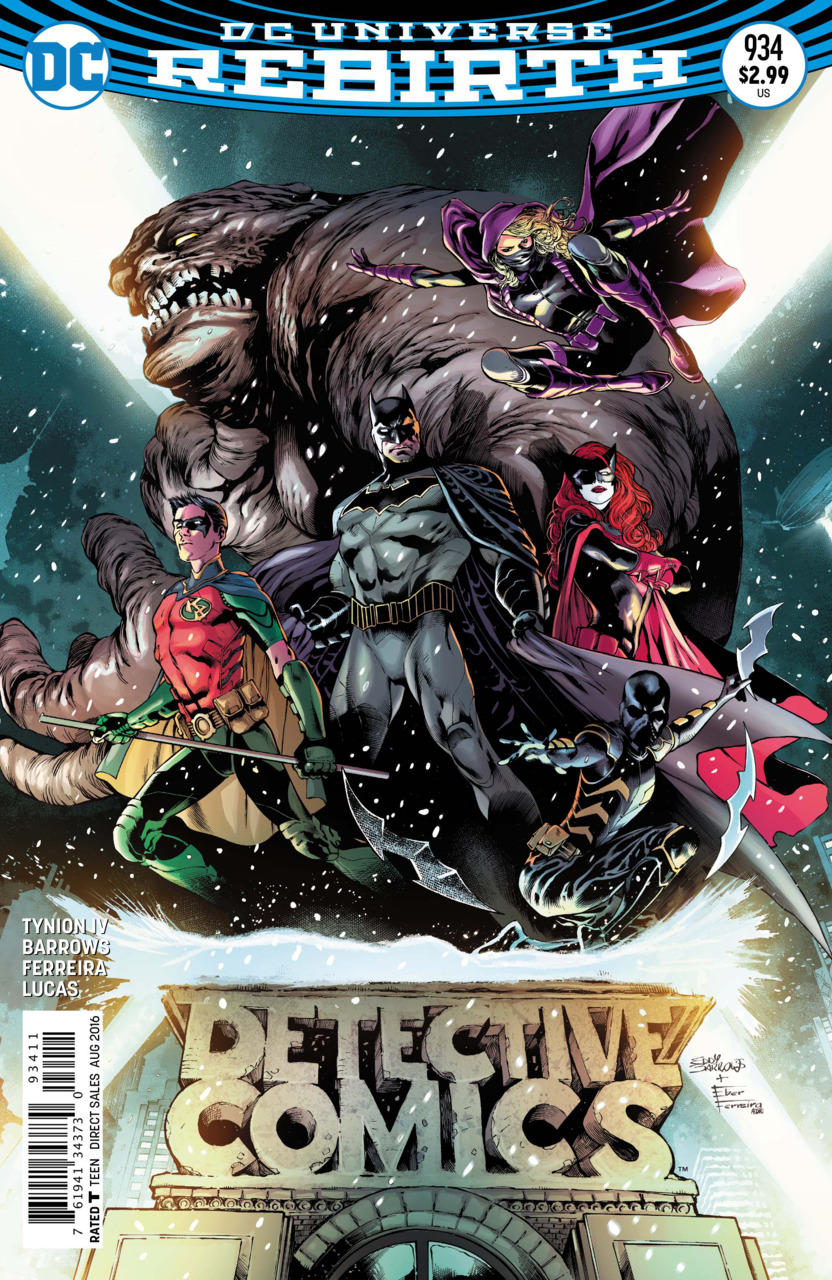 In Brief: In the face of a shadowy threat to all of Gotham’s vigilantes, Batman and Batwoman (Kate Kane) invite Red Robin (Tim Drake), Spoiler (Stephanie Brown), Orphan (Cassandra Cain), and Clayface to Bat Boot Camp.

Summary (Spoilers): In Gotham, two days ago, Azrael (Jean Paul Valley) is chased and beaten by a shadowy figure dressed like Batman. Batman himself intervenes, but finds no trace of the assailant, and Azrael believes that Batman was his attacker. Batman notices and destroys a bat-shaped recon drone.

In the present, Batwoman spars with her father over her comms. He is worried about her solo modus operandi, saying that as a soldier, she works better with a team. He begs her to let him help her, but she cuts the conversation. At home, she knows someone is watching her, and issues a challenge. Batman appears, and they briefly scuffle, before he shows her another of the drones and says it’s beyond his capabilities. Batman tells Kate that the drones are part of a huge swarm, all watching Gotham’s vigilantes. He’d planned to train these heroes one by one, but this threat indicates that more rapid group training is in order. Since his strength is solo or single-partner work, he asks her to help in with unit training. Batman also reveals his identity as Bruce Wayne to Kate, but is surprised when she tells him she has known for over a year and a half. She laughs, then asks him who the recruits are.

The first is Stephanie Brown, the Spoiler, who we meet taking on an entire warehouse full of Penguin’s thugs. Tim Drake, Red Robin, jumps in to assist her, and after trading barbs, the two take down the gang. Batman tells Batwoman his evaluation of the two, and assigns Tim as Kate’s lieutenant. The two Bats then move on to Cassandra Cain, Orphan, who is saving a group of children from a human trafficking ring. After explaining Cass’s origin and skills, Batman introduces the final member of the team: Clayface – Basil Karlo, who has broken out of Arkham to watch one of his old films as an actor before the accident. Batman offers Clayface redemption, the chance to do good, and the former villain agrees.

Atop Gotham PD, Batman and Batwoman lay out the situation and lay down the law. Spoiler is a bit apprehensive, but the team leaps into the night (leaving poor Clayface wondering how he’s supposed to grapple from building to building). Kate tells Bruce that she is a partner, not a subordinate, and that he needs to trust her with everything he knows about the threat.

Meanwhile, the villainous group monologues about the army they’ve built to fight Batman, and we see a huge mass of Bat-themed armored soldiers with heavy rifles.

In Depth: James Tynion IV spent most of the past two years spearheading the weekly Eternal series events. In both of them, he focused on the Bat-family, as opposed to just one or two core characters, creating stories that explored the world of Gotham and Batman in a more expansive, ensemble-focused way than other Bat-books offered at the time. Now, he brings the same approach to Detective Comics. Focusing on characters not especially well serviced outside of the Eternal lines – Spoiler, Red Robin, Orphan, and Batwoman – and including some interesting choices like Clayface, Tynion weaves a mystery (since this is still, after all, Detective Comics) that promises the same kinds of team adventure that made the Eternal line popular (if a sometimes hampered by the stresses of a weekly comic).

Eddy Barrows and the rest of the art team produce a really pretty book – clean lines, recognizable character designs, really exciting fight sequences, and even moody character scenes like that of Clayface in the movie theater. The colors are dark but vibrant, and the facial expressions very effective. The clean-lined, dark style fits well with what we’ve seen of Alvaro Martinez’s work in the Eternal series, which is good, since Martinez will alternate (seemingly every two issues) with Barrows on pencilling duties.

Tynion’s strength is definitely in his characterization. He provides really enjoyable introductions to each of the characters, and gives them all at least one really awesome moment, from Batwoman knowing Bruce’s secret identity to Cass’s one-word declaration to those she’s rescuing. The villains’ plot is fairly generic so far, par for the course with the villains in the two Eternal series, but the strength of Tynion’s characterization, and the moody effectiveness of the structuring of the story combined with the art pushes past that minor flaw.

Pick up/Pass? With strong characterization and solid art, this issue is a definite “Pick up.”

In Conclusion: Batman and Batwoman’s recruits are in for the fight of their lives with a huge shadowy organization.