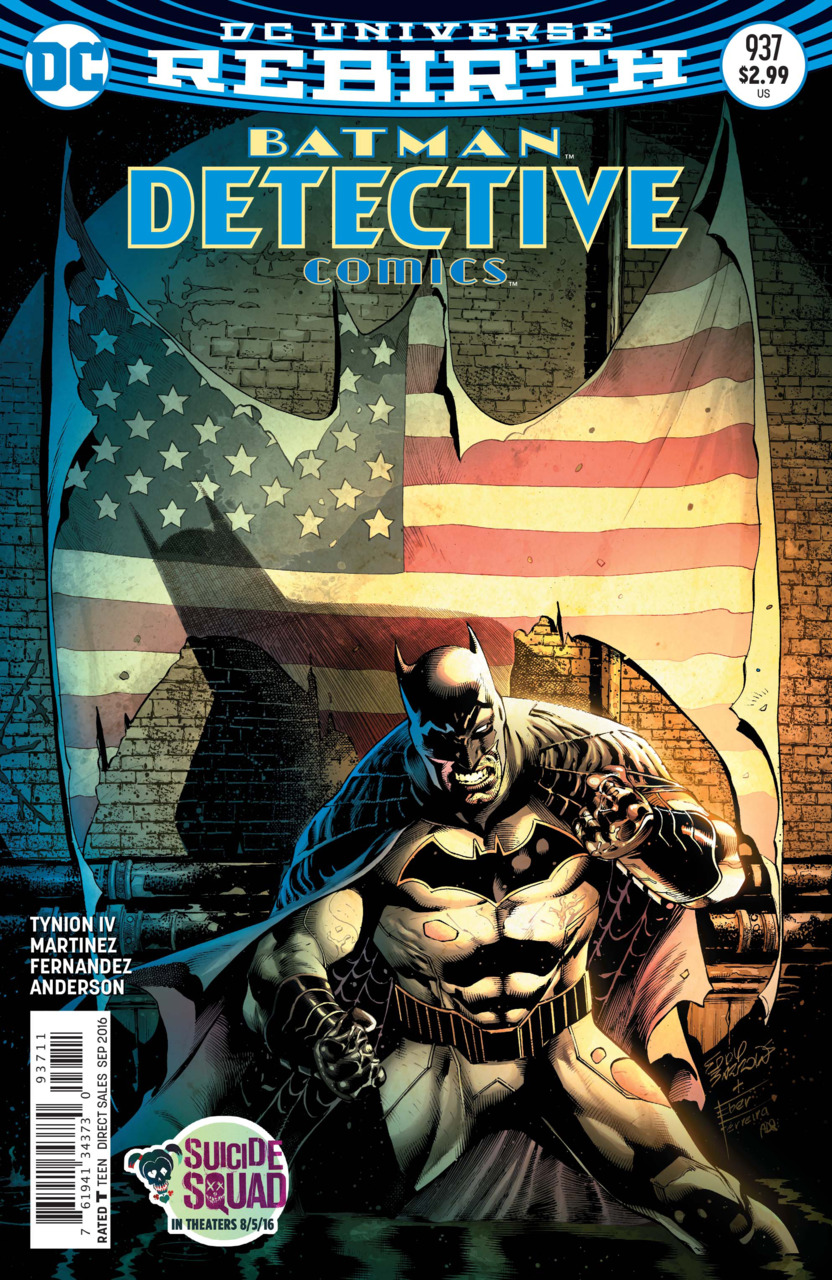 In Brief: Batman takes on the Colony from the inside, as his team regroups.

Summary (Spoilers): Batman wakes up in a special cell after being captured by the Colony. He sees two masked agents going through his utility belt, and uses a smoke bomb in his tooth to escape, marveling at the scope of the base.

Meanwhile, Batwoman, Red Robin, Spoiler, Orphan, and Clayface escape to Red Robin’s backup base, which has Bat-bullet-trains to take the team anywhere in Gotham incredibly quickly. Red Robin reveals he knows where the Colony is, and the team plans their counterattack under Batwoman’s leadership.

As Batman explores the base, he finds a young man named Ulysses Hadrian Armstrong, a computer and technology expert who is about Red Robin’s age who goes by the codename “The_General.” Armstrong reveals the Colony has been working for over two years, inspired by the Zero Year, fighting terrorism and other threats. Sickened by the lethal tactics, Batman takes Armstrong out before he can draw his pistol, but four Colony soldiers have snuck up, occupying him.

Jacob Kane approaches, revealing his knows Batman’s secret identity, but hasn’t told anyone else. Batman also reveals that he knew Kane was involved because of the intensity of the surveillance on Batwoman, Kane’s daughter. They conflict over philosophies, and then Kane reveals the Colony is in Gotham to combat the League of Shadows, which Batman denies the existence of. Kane holds a gun to Batman’s head, but Batwoman, Red Robin, Spoiler, and Orphan appear out of a false wall behind Batman, having used Clayface’s abilities to sneak in. Batwoman orders the team to attack.

In Depth: After a Batman-light last issue, Tynion gives Batman a huge, exciting spotlight as Batman escapes from captivity and is generally awesome. The rest of the team gets less focus, but their scenes are full of character interaction and great moments, such as the reveal of Red Robin’s backup base, picking up a thread hinted at by Scott Snyder in Batman #35 for Bat-monorails. A large part of the enjoyment of Tynion’s writing of the Bat-family is the clear enjoyment he has in building the world and details that these characters inhabit. A slight criticism of that element of the writing appears in the way each element has only been used once before it’s destroyed or abandoned. Hopefully, we get to see things like the Mud Room and the Belfry become regular, rather than awesome but ridiculously impractical one-time use locations.

Alvaro Martinez’s pencils and Brad Anderson’s colors are clean, clear, bright with well chosen contrasting darkness. While there aren’t quite as many stylish flairs as the issues penciled by Eddy Barrows (who provides the excellent main cover), the clear storytelling compliments Tynion’s writing very well. Of particular note are the way all of the costumes work well together – impressive considering the different tone of each character – from Batwoman’s vivid and stark black, red, and whites, to Spoiler’s more muted black, purple and blonde, to Red Robin’s 90s inspired green and reds, to Orphan’s ninja black and yellows. The final splash of the team attacking is really excellent.

Given that this issue ends with a clash between Batman and Batwoman’s team and the Colony, a few speculations about the future of this arc present themselves. Either the team will prevail, possibly by using the Colony’s technology against them (such as their helmets, already known to be able to block hearing in this issue), or the two will be forced to face a common enemy together. One hopes that Batwoman and her father will be able to work things out instead of coming to direct blows, but the Colonel doesn’t seem that interested in listening to criticism.

Pick up/Pass? Another issue of solid art and writing. Definitely pick up.

In Conclusion: The story brings things to a boil, with the team joining Batman for a full on confrontation with Jacob Kane and the Colony.