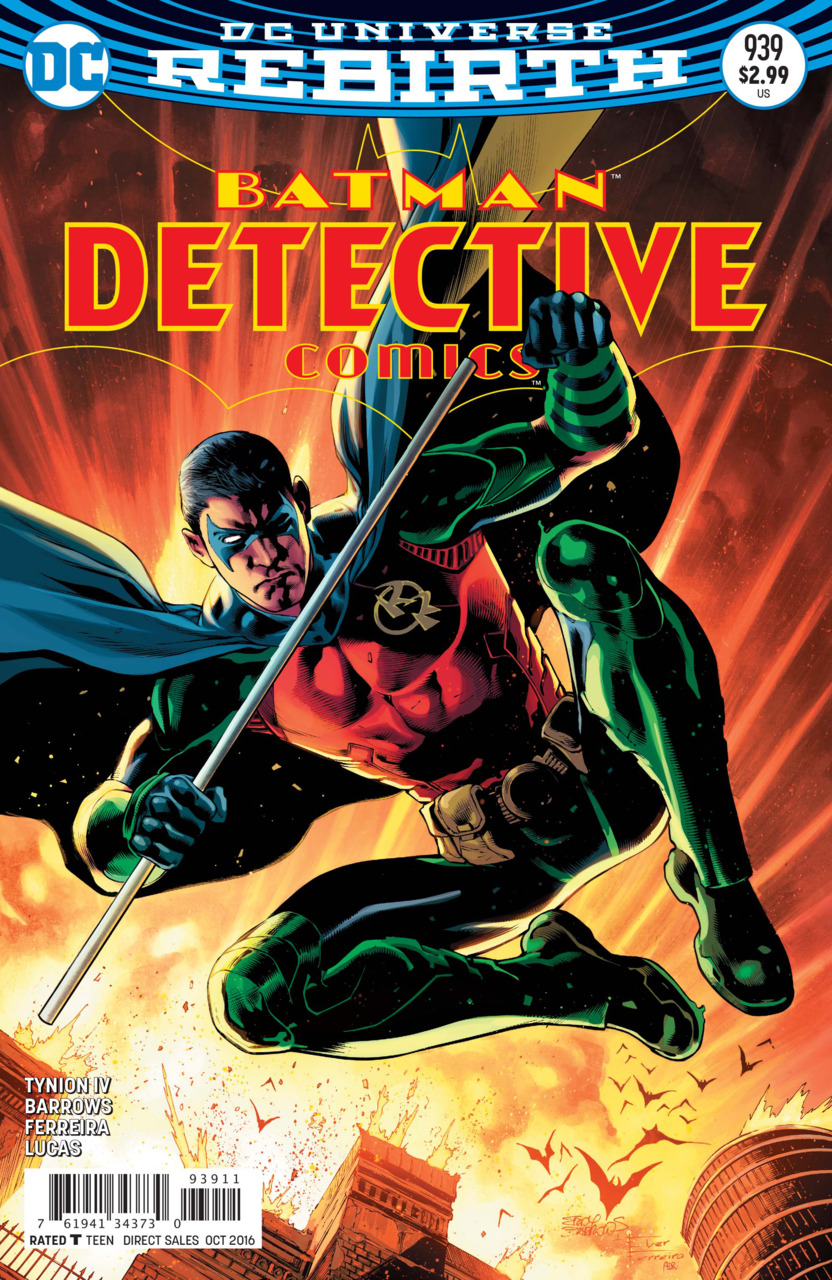 In Brief: In the aftermath of their escape from the Colony, Batman (Bruce Wayne), Batwoman (Kate Kane), and their team go into overdrive to thwart Jacob Kane’s plans.

Summary (Spoilers): Many years ago, Jacob mourns the death of his sister Martha, alongside his wife and daughters. He expresses anger at his brother-in-law’s foolishness in walking Crime Alley at night, but his wife Gabi admonishes then comforts him. Kate approaches Bruce, sitting alone with Alfred guarding him, and lets him know that even if their fathers were at odds, she would always be there for him.

Now, Batwoman, Batman, and their team have retaken the Belfry. Batman updates Alfred with plans while Clayface, Red Robin (Tim Drake), Spoiler (Stephanie Brown), and Orphan (Cassandra Cain) clean up the place, putting the defeated Colony soldiers in holding cells. Tim Tells Steph that after they defeat the Colony, he will be going to Ivy University and leaving Red Robin. They make plans to date long-distance, but Steph still pushes Tim to tell Batman.

Kate confronts Bruce about Batman knowing Jacob was behind the Colony. Bruce mirrors the young Kate’s actions, promising that he will be there for her now that she feels like she has no family left. Batman then informs the US President of the Colony’s actions by phone.

Skimming through the Colony’s files, Tim realizes that the General has sent a swarm of drones to complete the missions, now that Tim has disabled the soldiers. Batman and Batwoman send their team out to evacuate all the targets.

In the Colony’s flying Bat-carrier, Jacob orders the attack, though he remains conflicted both about collateral damage and his daughter. Clayface tries to evacuate a family disguised as Batman, but is forced to resort to scaring them using his default form. Orphan’s normal form, however, proves quite effective, but a mysterious black-eyed man in a baseball hat slips past her. Batman and Batwoman deter Jacob by standing as human shields in front of his first target, causing Jacob to go to his second target. However, Tim figures out that he can re-target the drones from their normal targets to himself. Steph panickedly informs Batman of Tim’s plan, and Bruce desperately tries to make it to his Robin’s side. Kate, meanwhile, heads to confront her father. The issue ends with Tim carefully, calmly facing the hundreds of lethal drones saying, “Let’s dance.”

In Depth: James Tynion IV, from the first times he’s written for The Batman Universe, has shown his love of the idea of family – from the sibling bond between Harper and Cullen Row, to the twisted relationship between Arthur and Stephanie Brown, to the global corruption of family perpetrated by the villain Mother. Here in Detective Comics, he’s honed in on the characters of Kate Kane and Tim Drake to explore this theme at a very detailed level. Kate faces the multiple betrayals by her father – but understands that all of them are done from a place of wanting to protect her and his country from the evil that took his sister, wife, and daughter. Tim, in the meantime, has to decide how to grow into his potential as a man while considering the needs and hopes of Batman, who serves in a quasi-paternal role. It’s fascinating looking at the contrasts between Jacob and Bruce as father figures – both driven to desperate straits by their love for their children, but one turns to death and deception, while the other struggles to become more open and transparent. Though some commentators have claimed that Jacob’s characterization has been warped into a cartoonishly evil villain by this arc, it’s more accurate to see the line of darkness within Jacob’s character all the way back from Greg Rucka’s seminal Batwoman story Elegy.

Though rumors are swirling around Tim’s fate in this arc, given the possible foreshadowing of “one day from retirement, so of course he’s going to die” and his absence from any solicitations or covers for the next three months, Tynion manages to construct a beautiful sequence of Tim choosing to put himself in harm’s way to save his city and his family. Similar to Tim Seeley’s masterful construction of Batman and Robin Eternal #20, where cutting between many plotlines as the tension rises creates a satisfying climax, Tynion flashes between Tim’s quiet decisions and preparation to Steph and Bruce’s frantic attempts to save him, culminating in Tim’s joyful, confident “Let’s dance.”

Though Tim and Kate take center stage, Clayface, Orphan, and Spoiler all get their moments – brief and humorous for Basil Karlo, swift and competent for Cass. Steph gets a lot of connection to Tim, though hopefully in ways where we’ll see her grow in coming issues, as she continues to leave her mask off during operations and use people’s secret identities over the communications channels.

Tynion seems to imply that Batman is right about the League of Shadows being a smokescreen, but hopefully he will be able to resolve the plotline without making Jacob look completely incompetent (after all, Jacob knew about the Court of Owls long before Bruce did). The black-eyed man who slips by Cass during the evacuation might be a member of the League, or might be a hint planted about the upcoming Victim Syndicate arc which will commence following the Night of the Monster Men crossover.

Though Eddy Barrows isn’t quite as consistent with faces and expressions as Alvaro Martinez, his layouts continue to impress, and the color work with Adriano Lucas lends a dark, exciting tone to the book. Additionally, Barrows, inker Eber Ferreira, and Lucas work together to use a more painted style to highlight moments of extreme stress, tenderness, or fear, giving the eye a visible change of pace to stop and resonate with the characters a bit more. All in all, Detective Comics continues to be one of the most impressive looking books coming out of the Rebirth relaunch.

Pick up/Pass? Though this issue slacks off a bit on advancing the plot, the great character work with Kate, Tim, and Bruce makes it a definite Pick Up!

In Conclusion: Batman and Batwoman take decisive steps to defeat the Colony’s plans for good, but Tim is forced to put himself in deadly danger as a result.