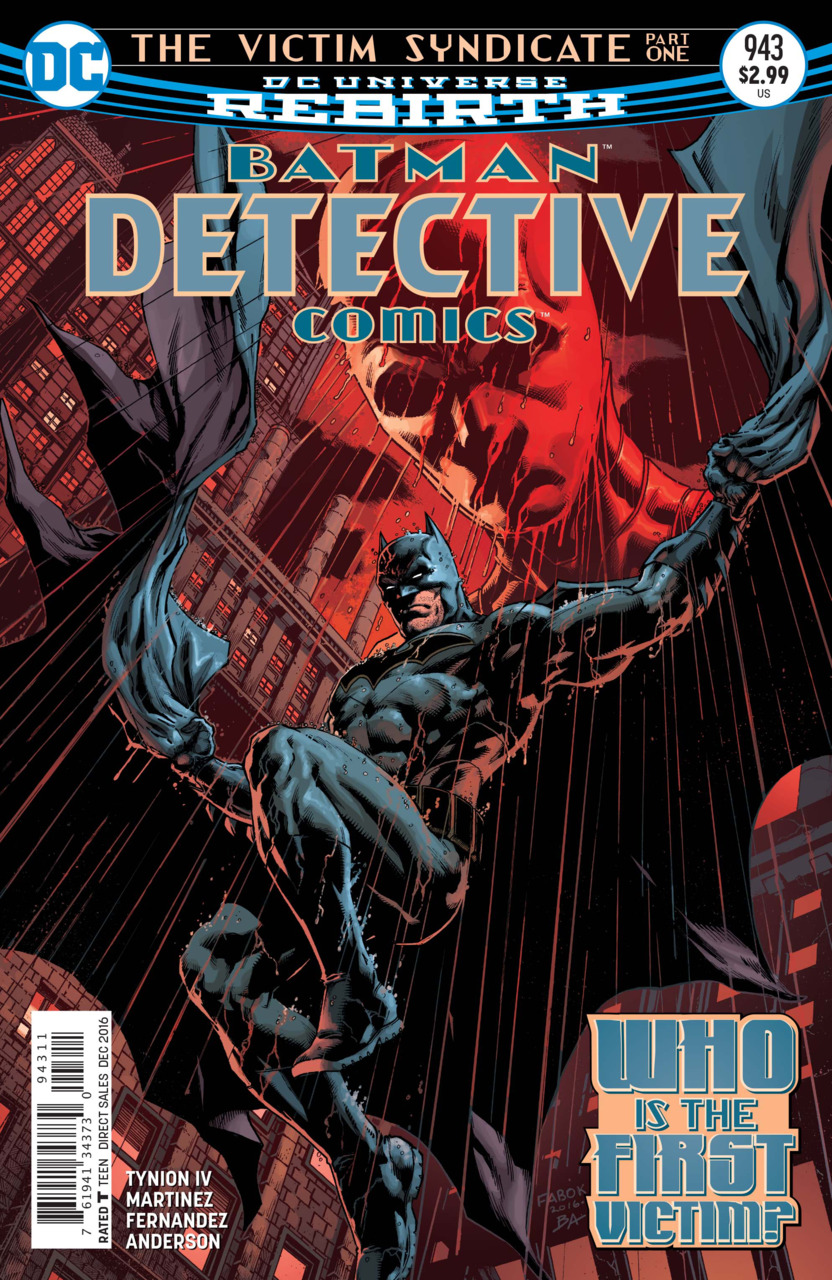 In Brief: In the aftermath of the Colony and the Monster Men, the Bat-Family Bootcamp attempts to recover, just as the Victim Syndicate strikes!

Summary (Spoilers): Batwoman (Kate Kane) and Detective Renee Montoya open the issue examining Wayne Enterprise headquarters, which were attacked by a new gang of supervillains who want to destroy the Bat-Family. Video recordings of interviews with CEO Lucius Fox and the receptionist on duty at the time explain that one villain silenced all speech, while another killed through the air with extraordinarily potent toxins. The leader, covered in a black mask, didn’t take anything, just stated their hatred of the Batman and all who support him, such as the Wayne Enterprises company. Renee hints at wanting to help Kate, but Kate cuts her off, still dealing with Red Robin (Tim)’s death.

In the Belfry, Batman attempts to interrogate Jacob Kane, but Kane refuses to talk with anyone but Kate. Frustrated, Batman calls Kate for an update on the attack at his company, and she tells him that they need to talk about Spoiler (Stephanie Brown), who’s cut herself off from the team following her boyfriend’s death. The purple-clad heroine herself is at Leslie Thompkins’s clinic, talking to Harper Row (formerly Bluebird, now retired and in civilian life). She’s struggling with the damage that the vigilante life does to normal people. Though Harper can’t wholeheartedly affirm the choice to wear the cape, she does comfort Steph in her grief. As she leaves the clinic, after saying hello to Jean-Paul Valley, Steph catches a glimpse of something that appears to be the leader of the attack at Wayne Enterprises, but the figure is quickly gone.

Orphan (Cassandra Cain) and Clayface (Basil Karlo) train in the Mudroom, showing a warm bond springing up between them. However, when Karlo calls for the hardest villain available, it shows him a vision of Clayface in all his wrath. Though Cass tells him he doesn’t have to be that way anymore, Karlo is clearly shaken.

Later, at the GCPD fundraiser, Kate insists that Bruce connect with the team, and work with them to possibly get professional help. With Alfred supporting her, Bruce indicates that he will take some kind of action in that direction. He also tells Kate that he’s at the fundraiser to recruit someone to fill Tim’s spot on the team, with experience and technical skills – Luke Fox, who makes a Tony Stark-like entrance in a flying car. Harper drools over the technology, as she, Steph, Cass, and Karlo walk into the party. Not impressed with Luke’s flashy style, Kate argues with Bruce about recruiting him, but before they can come to a decision, the Victim Syndicate attacks, promising retribution to the Batman and all who help him for destroying their lives.

In Depth: After an action packed, beautifully drawn, but a bit hollow crossover for the past month, Detective Comics is back on track. And what an amazing track it is! Alvaro Martinez’s art is a clean-lined and appealing as it has ever been, and Tynion’s writing captures the characters and plot brilliantly. From the complicated but completely clear opening, to the terrifying debut of the villains at the end, every panel and dialogue balloon was riveting.

Picking up from the conclusion of “Rise of the Batman” and the death of Tim Drake, Tynion and Martinez brilliantly capture the pain of losing a family member for each of the team. From Stephanie’s open emotion, to Kate and Bruce’s silences as the pain catches them, it’s clear that the loss of Tim won’t be quickly forgotten. Martinez especially captures the body language and expressions, even through the masks our heroes wear.

In addition to the strong character work, Tynion also builds the tension throughout the issue. However, not content with just introducing new villains, he builds thematic threads all the way through each panel. From the receptionist interviewed by the police about the Syndicate’s attack – a young former prostitute named Ellie, created by Grant Morrison as someone whose life has been made better by Batman getting her off the street and into a position at Wayne Enterprises – we see that Tynion is interested in the complexity of the consequences of masked and caped heroes. While there’s never going to be a Batman story where Bruce’s crusade is rejected, it’s good to see a writer take an intelligent look at the question, “Should Batman keep being Batman?” even though there’s no suspense about whether the answer will be “yes.” Peter Tomasi told a similar story in the early days of Batman and Robin, but this arc promises to be a bit more character focused and a bit less melodramatic and grotesque. Though Martinez’s rendering of the victims of the toxin-powered member of the Syndicate, and Clayface’s vision of himself as a terrifying monster in the Mudroom, certainly contain plenty of grotesqueness.

Pick up/Pass? A hearty recommendation of “Pick up”!

In Conclusion: Complex themes and visual storytelling techniques propel this story of a fractured family forward to face their next challenge.