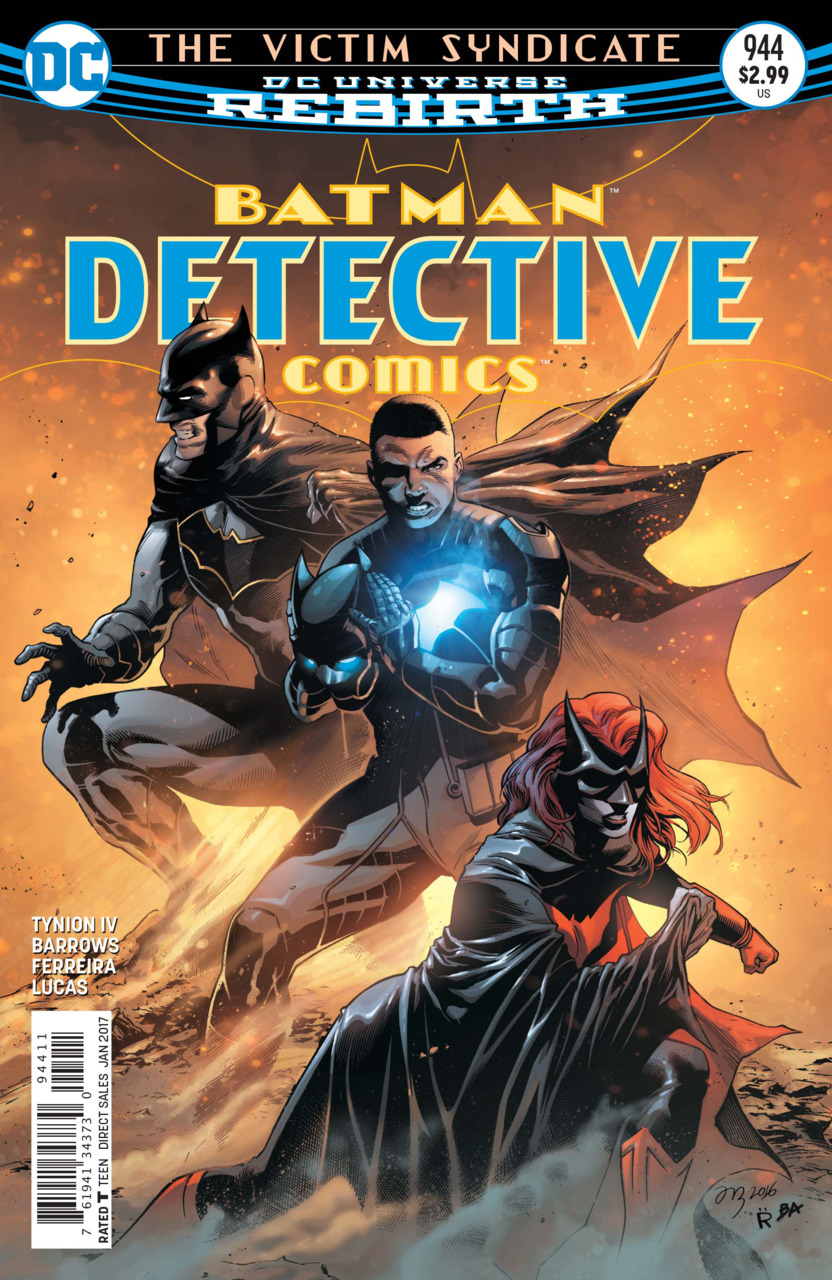 In Brief: The attack of the Victim Syndicate propels Batman and Batwoman into action, with Batwing coming along for the ride.

Summary (Spoilers): Harper, Stephanie (Spoiler), Cassandra (Orphan), and Basil (Clayface) sneak into the parking garage so Harper can look at Luke Fox (Batwing)’s flying car. They are startled by several drones flying out of the car, and Batwoman’s call to arms at the attack of the Victim Syndicate. Luke jumps out a window and meets his drones in a very Iron Man (and very awesome) sequence, taking off as Batwing. The cops, led by Renee Montoya, arm themselves with Luke’s non-lethal weaponry on display. The First Victim, leader of the Syndicate, says they are waiting for Batman, not the cops.

Though the team quickly takes down most of the other four members, the First Victim reveals an electromagnetic shield that prevents any direct attack from Batman. As the two teams face off, the First Victim orders Mr. Noxious to take Stephanie down – and she immediately collapses, violently vomiting as non-lethal but painful poisons incapacitate her. Batman orders his team to stand down for Stephanie’s sake, and the First Victim monologues about the evils of Batman. However, Batwing takes down the shield, and Batman punches the First out, allowing Harper and Basil to take Steph to Leslie’s clinic. As they do so, however, Mudface confronts Clayface, showing him something terrible about himself.

The team, able to fight back with Steph safely away, does so ably, but the Syndicate paralyzes Batman and releases anti-fear-toxin that impels the cops present to fire their weapons indiscriminately. Fortunately, since they are all armed with Luke’s non-lethal weapons, no one is killed, though over a dozen are hospitalized. Luke instantly understands that Batman was trying to recruit him to fill in the void Tim Drake left, and the trio of leaders sit down to debrief and plan. The Syndicate released their identities during the attack, and all were casualties of attacks aimed at the Batman. Kate and Luke clash over branding and team leadership, but Bruce orders them to move against the Syndicate.

Later, Batman attempts to see Stephanie, but Leslie keeps him out, lecturing him about the dangers of involving children in his crusade. Meanwhile, the First Victim pays Stephanie a visit…

In Depth: Eddy Barrows, in his first issue of the arc, turns in slightly disappointing pencils. Though his trademark stylish use of panels, framing, and shadow is back in full force, he’s not using as much flair with his painted panel effects to highlight emotions, and his figure work is occasionally very wonky – the first panel of the book elongates the quartet of heroes past being recognizable, and his Orphan is very strangely scaled compared to the rest of the Bat-team.

However, in general the character work is very well done. The Victim Syndicate is appropriately horrifying, and the fight is very exciting, with a variety of difficulties such as the electromagnetic shield and the paralysis rendered effectively. Additionally, the post-fight briefing was very entertaining in dialogue and art, with Luke’s practical, cheerful presence, Batwoman and Batman’s dark disapproval providing humor and emotion. The little details of the hero symbols on the chairs carried over from Night of the Monster Men, and Luke sitting in Red Robin’s seat, prove that this book is focused on building a strong world our characters can inhabit.

Tynion builds up his villains very well, giving them plausible grievance against Batman (unlike the thugs and idiots of the similar Batman and Robin storyline from 2012), while still showing their clear villainy. The one aspect of the story giving pause right now is that this was touted by Tynion in interviews as a Spoiler-focused arc, and except for some very moving panels two weeks ago, Stephanie hasn’t gotten any perspective or development at all. Setting up the conflict is important, and introducing Batwing as a welcome addition to a grieving team already inclined to overly dark characters, but hopefully the First Victim’s visit to the traumatized Stephanie will herald important development in her character.

A last note – the First Victim was originally theorized by this reviewer to be Stephanie’s mother, Crystal Brown, who Tynion has hinted might become the next Cluemaster – but the idea that they are Batman’s first unintended consequence indicates they are more likely to be related to the Joker or some other seminal Batman villain deep in continuity.

Pick up/Pass? Pick up – a solid entry in the excellent run by Tynion and his artists.

In Conclusion: A stirring combination of horror and action, Tynion pushes his examination of Batman’s mission further in The Victim Syndicate part 2.