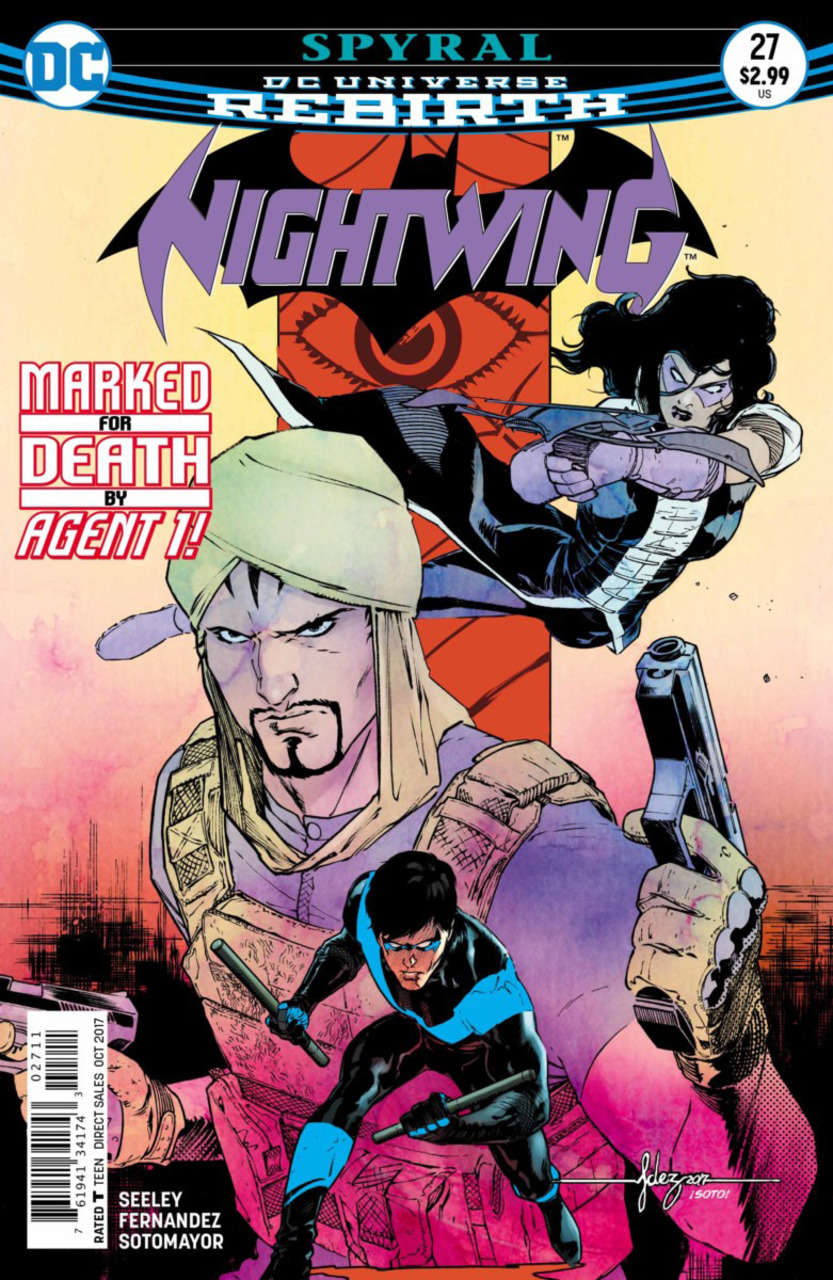 Overview: After the revelations of last issue, Nightwing and Huntress must confront and combat a Spyral turned bad!

Synopsis (spoilers ahead): Nightwing #27 kicks off with Nightwing and Huntress plunged into conflict with the members of Spyral, as Dick attempts to reason with them to little avail. Agent One and his cohorts serve up somewhat of a beatdown on Dick as he reflects on what his time as a spy meant to him.

Meanwhile Pigeon continues her brain-washing/re-education of Shawn, pushing her further away from her former friends as Mouse, distressed by Giz’s death, is set to infiltrate the Casino and risk her own life to confront Desmond in retaliation.

Agent One aka Tiger continues his dialogue of why Spyral has turned upon itself and is now functioning as the Second Hand and he is seeking to kill Nightwing. Huntress is making it very clear that she considers lethal force as justified and despite Nightwing’s misgivings, internally he is assessing the threat level as high given Agent One knows that Bruce Wayne is Batman. With the help of some pop music and what appears to be nail bombs activated by the tunes, Huntress and Nightwing escape into a chopper where former members of St. Hadrians for Girls, and pupils of Huntress aka Helena Bertinelli, calling themselves the Skull Girls, await to lift Dick and Helena to safety. The Skull Girls give a recap of their recent activities which have included missions to uncover instances of “otherworldly technology.”  This landed them in hot water with Agent One and Spyral operatives who attempted to seize an artifact from them and end up capturing Lotti, one of their numbers. The Skull Girls have a life sign monitor which registers if any of their number are killed and Lotti is still alive although held captive at St. Hadrians under miles of traps.

Although Nightwing rationalizes he should call in the Titans or the JLA, he instead goes along with the plan to infiltrate St. Hadrians with Helena. Together with the Skull Girls they do just that, and zero in on the life signal. Unfortunately Lotti is revealed not to be herself and Nightwing finds himself facing Agent One aka Tiger with some sort of computer data graphic floating around him, all the while another version of Tiger is shown to be strung up and obviously under duress and torture. More next issue…

Analysis: First up its important to note this issue (and indeed arc) lean heavily on the previous Grayson run by Seeley and Tom King and doubtless readers familiar with that run will get extra enjoyment out of this book. With that said, I confess to not having read that run, but I still very much enjoyed this issue. Like all good comics, this explains enough about Spyral that the issue can function on itself and for those whose interest has been whetted, there is now an incentive to go back and read what was an acclaimed run in the New 52.

The storytelling by Tim Seeley is compact and on point – I enjoyed the small movement in both Mouse’s and Shawn’s personal arcs while Nightwing and Huntress and their struggle against Spyral took center stage. Seeley is showing a deft hand at juggling multiple subplots and having them both blend and pay each other off in this book. The art by Javier Fernandez continues the gritty, almost grimy feel and I absolutely love it and think it fits the shadowy spy arc. Throughout this run there has been an effective use of different color palates to make aspects of each arc stand out. This entire run started with very shadowy, gritty color schemes and art which softened as Nightwing went to Bludhaven.

As side-note, I personally found it odd that the nail bombs were possibly generated by Ariana Grande music, especially considering recent terrorism events at her Manchester concert, which definitely make this appear in bad taste, but I am unclear as to what actually occurred in that scene and don’t want to blow it out of proportion.

The introduction of the Skull Girls and indeed Helena back into the main action has been an absolute delight and gives Dick Grayson’s mission a fresh take which is always important as Nightwing climbs up the issue numbers in this current run. I have to say that after Chuck Dixon’s acclaimed 90’s to 2000’s run on the character, this is currently my next favorite Nightwing run.

Final Thoughts: A strong, moody issue that ties back to the Grayson comic which Seeley co-wrote. While the plot lines of some of the supporting cast do slightly move forward this is primarily an issue of particular interest to Grayson readers. Another solid effort by this creative team!