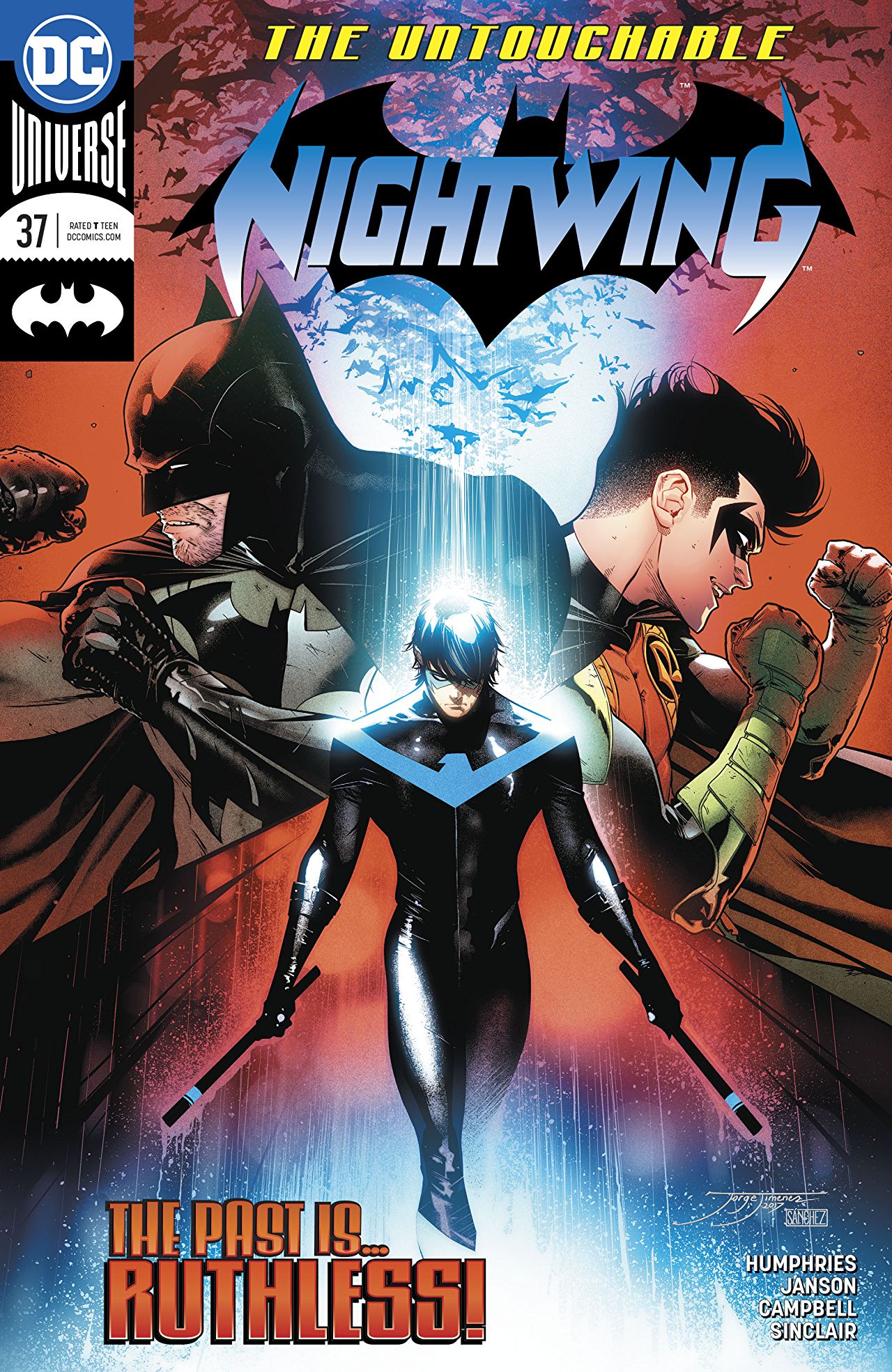 Overview: Nightwing remembers his early days as Robin back to the first time he encountered the Judge.

Synopsis (spoilers ahead): The issue opens at the Lucky Lighthouse Casino where the owner, Lucy Weatherton, speaks with her panicking staff about the gambling lock down in Bludhaven before ordering everyone out of the room.  Lucy then walks over to a window as Nightwing is in the process of climbing in out of the rain and the two share a hug, the two clearly knowing each other.  Nightwing warns Lucy that the Judge is back.

The story then flashes back to years ago in Bludhaven, to the night of “The City Hall Killings”.  The murder had no criminal record or motive for the murder of several people at City Hall, but in his belongings had a gold casino chip and a parking ticket to the Old Baily Church.  Batman and Dick Grayson’s Robin, a month on the job, take down a pair of thugs at the church and inside are attacked by shark-man King Sturgeon.  Robin is thrown into a wall like a rag doll after ignoring Batman’s instructions and as Batman squares off with Sturgeon, when someone pushes a statue on top of Sturgeon and takes him out of the fight.  The person responsible for pushing the statue turns out to be a young Lucy, wearing a baseball themed outfit and toting a baseball bat and calling herself “Baby Ruthless”.  Batman asks Lucy about the Judge, who Lucy states is able to get other people, with no criminal record, to commit murder and that the Judge seems to be making moves against gambling in Bludhaven.

Batman, Robin and Baby Ruthless find a note for a ship docking in Bludhaven Harbor, which the Judge is in the process of boarding and killing the crew.  The Judge confronts the captain of the ship and starts to convince her to ram the ship, carrying radioactive waste, into the harbor, which will halt the development of the casinos.  The Judge is interrupted by Robin, who flies into the cabin riding a harpoon shot by Batman.  Batman and Baby Ruthless board the ship as Robin fights off the Judge’s thugs.  As Batman stops the ship from crashing, Robin catches up with the Judge, but hits him too hard and accidentally knocks the Judge overboard who then escapes.  Robin, convinced he is going to be fired for his mistakes, is found by Batman sitting in the Justice Tree, with Batman telling Robin that next time he will do better.

Back in the present, Nightwing and Lucy speak about how Lucy became a casino owner and that King Sturgeon took over the Judge’s gang.  Nightwing speaks about how he failed to stop the Judge again when he was in college and how he feels responsible for the murders that the Judge continues to commit.  The issue ends with Nightwing realizing that King Sturgeon might be the key to stopping the Judge as his son, Guppy, stands over his father with a gold chip in one hand and a knife in the other.

Analysis: After hinting at a history between Nightwing and the Judge, this issue brings some of that history into focus, detailing his first run in from his days as Robin.  Writer Sam Humphries keeps the focus on Dick and his insecurities in his early days as Robin.  I like the idea that Dick was afraid of not living up to being Batman’s protege and in his desperation to prove himself, he messed up and a murderer went free.  I also like that Batman cuts Robin a break at the end of the issue, as too often Batman is written as cold and unforgiving.

It’s one of the advantages and drawbacks that still stems from everything resetting with the New 52 and the tweaks from Rebirth.  Dick’s past as Robin has remained very much undefined and while in a lot of ways it’s frustrating that so many of the stories that we all know from Dick’s past are possibly no longer part of his history, it gives a lot of room for creators to play around in.  I like seeing this window into Dick’s early days and I hope that Humphries continues to pull from the past.

The flashback also gives us a look into how Bludhaven became the city it is now as well as gives us a better look into what the Judge is after, who seems to be focused on destroying gambling in Bludhaven. I like the slow burn that Humphries is using in defining who and what the Judge is, and does a good job of preserving the character’s mystery without making his actions confusing or seeming random.

The story is structured as present-day book ends around a flashback which takes up the majority of the book.  Jamal Campbell handles the present-day sequences and handles it well.  I like the continuity of Nightwing still having a bandaged shoulder as it makes this issue just another hour in a very long night for Nightwing and the last page of Guppy in agony over his father and then holding out a knife ready to stab him is done with a lot of emotion.

The flashback is handled by veteran artist Klaus Janson.   Now, I want to be clear here that Janson is a legendary artist whose contribution to the industry as a whole cannot be argued.  While I’ve always enjoyed his work as an inker, I feel that his pencil work in this issue leaves something to be desired.  I find the anatomy of his figures to take a hit particularly in action sequences.  There’s something unfinished about the art in flashback sequences, with the panels feeling more like thumbnails and not a finished product, which is highlighted by the infinitely more polished art in the present-day sequences.  I appreciate what the book is going for in trying to instill a retro feel to the flashback.  While I don’t feel that it was particularly successful I hope they try this concept again with another artist.  I would love to see one of Nightwing’s creators, George Perez, get a similar story, for instance.

Final Thoughts: Despite some issues with the art, I continue to be impressed with this new direction for Nightwing.