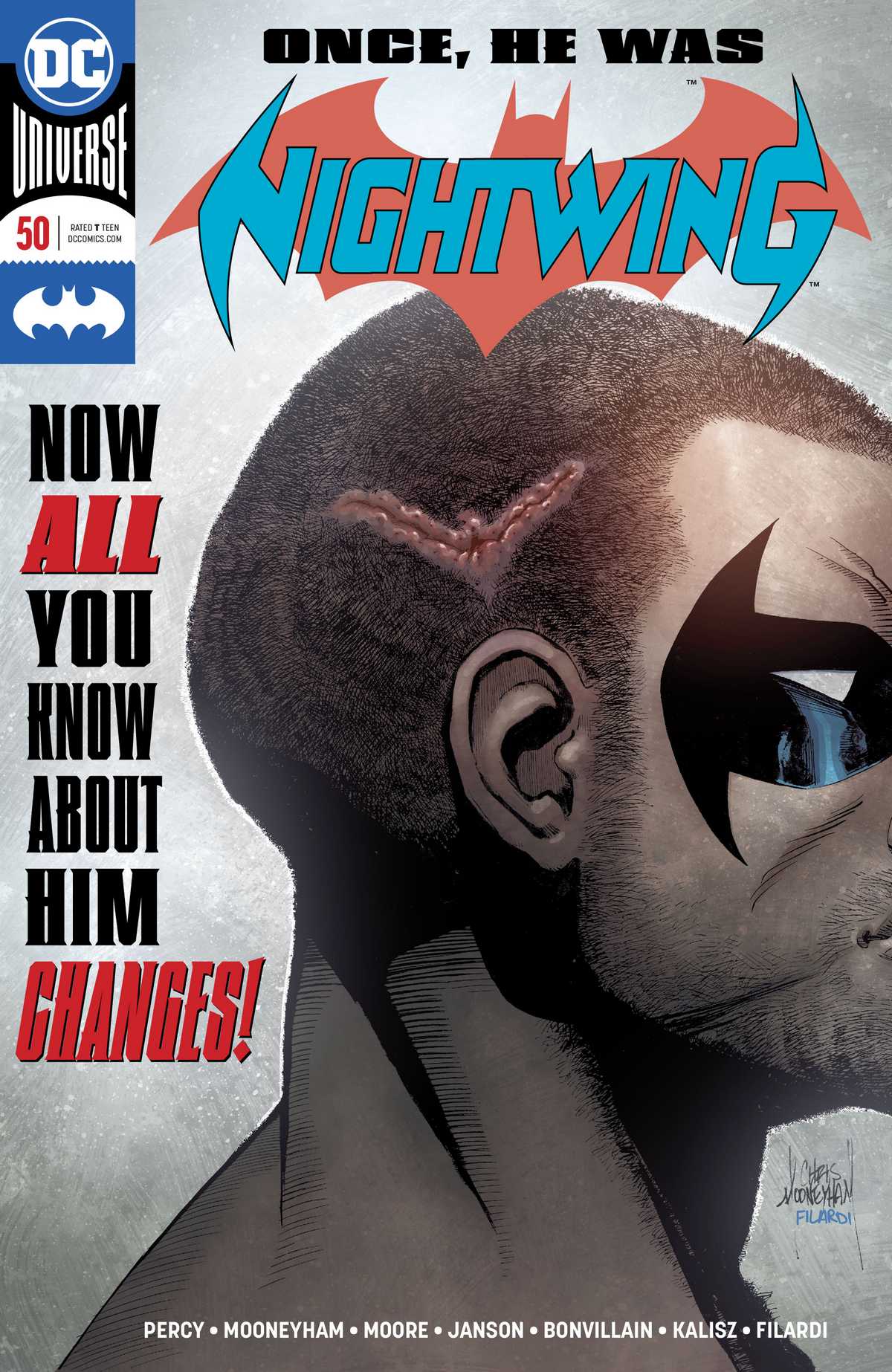 Overview: Dick Grayson tries to move on from the events that happened in Batman #55 by taking on a new identity as friends try and talk him out of it.

Synopsis (spoilers ahead): Dick Grayson gets a coffee at a diner in Bludhaven and reflects on being shot in the head when he’s interrupted by an attempted robbery. He knocks out the armed robber by throwing his coffee mug at his head and decides to call it a night.

We flashback to Dick’s younger years as Robin in Gotham where he helps Batman break up one of Scarecrow’s twisted schemes. He stops Batman from being too violent with Scarecrow and says that Scarecrow is a “pathetic” person to be pitied.

Back in the present day, Dick has been spending his time in fight clubs, at bars playing pool, running on the beach during the day and riding his motorcycle through the streets of Bludhaven at night as he tries to figure out who he is after suffering memory loss.

The story then flashes back to Scarecrow in Arkham where he is obsessing over Robin’s lack of fear.

In the present day in Bludhaven, Dick gets a job driving a taxi.

We go back in the past to Arkham where Crane engineers an escape by faking his own suicide and using a fear toxin tooth to poison the guard. His words to the dying Arkham employee mirror Robin’s earlier comments about him being pathetic.

Fast forward to the present day and Dick wakes up in a fancy house in Bludhaven. He has been breaking into vacant houses to sleep and he quickly leaves this one when the homeowners come back from vacation. As he wanders the streets, Babs shows up to try and talk to him and get him to remember who he is. Dick rudely shrugs off her attempts to help as he goes into a bar with Babs following closely. She finds out he’s going by the name “Ric” and Dick tells her that this is his life now.

We flashback to Gotham where Robin is on patrol and attacked by Scarecrow. Robin decides to take this opportunity to test out his new escrima sticks.

The story shifts back to present day where Barbara is in the Batcave telling Batman and Alfred that she’s afraid they’ve lost Dick. Batman says that maybe it’s better that he can get a fresh start without them.

Elsewhere, Dick is aggressively driving his taxi through the streets to avoid traffic caused by a police scene. As he drives away, he says there’s no point worrying about someone else’s problems. At the crime scene itself, Detective Svoboda and the other cops are perplexed by the case of a man who appears to have drowned in his sleep. There is a black crow’s feather in his hand.

Dick goes into what used to be his underground Nightwing HQ and sets fire to the whole place.

Analysis: It was really hard for me to come up with a rating for this issue because while there were a few things I liked about the issue itself, there was a lot that I disliked that had nothing to do with the creative team attached to the book. My biggest problem with this issue is that everything feels forced in order to attain a specific status quo that DC wants for the character. Aside from Babs’ heartfelt attempt to help Dick, nothing that happens in this issue feels organic or natural at all. Nightwing gets shot in Batman #55 and neither Batman #56 or Nightwing #50 deal with any fall out from this. We get three panels of exposition from Dick about having memory loss and mood swings but we never really see him or anyone deal with recovering from this injury. I’m no doctor, but I think being shot in the head is a pretty serious injury. However, nothing seems to be different for Dick except his name, personality and lack of hair. He’s participating in underground fight clubs and riding a motorcycle without a helmet as nothing happened. We don’t even know how much time has passed since he was shot. It’s a recovery the defies all laws of science (even comic book science). I don’t know for sure, but it certainly seems like this semi-amnesiac storyline has been foisted on readers because DC wants to break up the Bat-Family and have Dick act like a rebel. The problem is that there’s really no logical way for this to happen.

Speaking of the Bat-Family, Babs makes another appearance in the Nightwing series. Coming off the phenomenal story in Batgirl #25 and the previous story arc in Nightwing, I was expecting we would see more of these two working together. Percy writes her character perfectly in this issue and she looks absolutely fantastic thanks to Moore’s art. The six-panel page where she’s in the Batcave with Batman really tugs at the heartstrings. Unfortunately, given the new status quo, I doubt we will see much of them being a meaningful part of each other’s lives anytime soon.

I’m not certain how Batman is here in Gotham when he’s hunting down KGBeast in the pages of the Batman series. It could be that this story takes place much later, but we don’t know for sure because we are never told what the timeline is like. I also feel like Bruce would really make more of an effort to reach out to Dick. His first adopted son and crime-fighting partner gets shot in the head and we never really see Bruce being there for Dick. I find it really hard to believe Bruce would just let Dick go without reaching out when Dick is clearly acting out of character. It’s a missed opportunity to explore the connection between Bruce and Dick.

As for Dick himself, it’s hard to connect with how he’s feeling because we don’t really understand the extent of his memory loss. He doesn’t remember Barbara and he doesn’t remember being Nightwing but he knows he used to be Nightwing. At the end of the issue, he torches Nightwing’s HQ and declares that he’s not afraid. I don’t think Dick Grayson has ever been someone who has been defined by fear and I don’t see how torching his former digs is some declaration of courage. The flashbacks in this issue actually deal with Dick not being afraid of things. I actually think burning his former hideout shows that he’s more scared of his past than he is courageous about embracing his future.

I didn’t think the flashbacks really worked with the present day story in this issue. There is a great moment in the flashbacks where Robin stops Batman from going too far but I really didn’t see how the flashbacks connected to the present day story. The crow feather in the dead man’s hand at the end of the issue is the only connection to the flashbacks and I think the issue still works without them. The transitions from present day to the past and back again were a bit jarring as the art styles of Mooneyham and Moore are so different. I thought Mooneyham did a respectable job in the Dark Web arc but a few of his pages in this issue seem a bit unpolished. I’m glad Moore is going to be on more Nightwing issues in the future because he draws the best Dick Grayson I’ve ever seen.

Final Thoughts: This is an issue with some great art and a story that feels inorganic and forced in so many ways. While I didn’t always enjoy every part of it, it’s still a shame Percy did not get to finish his story the way he wanted.