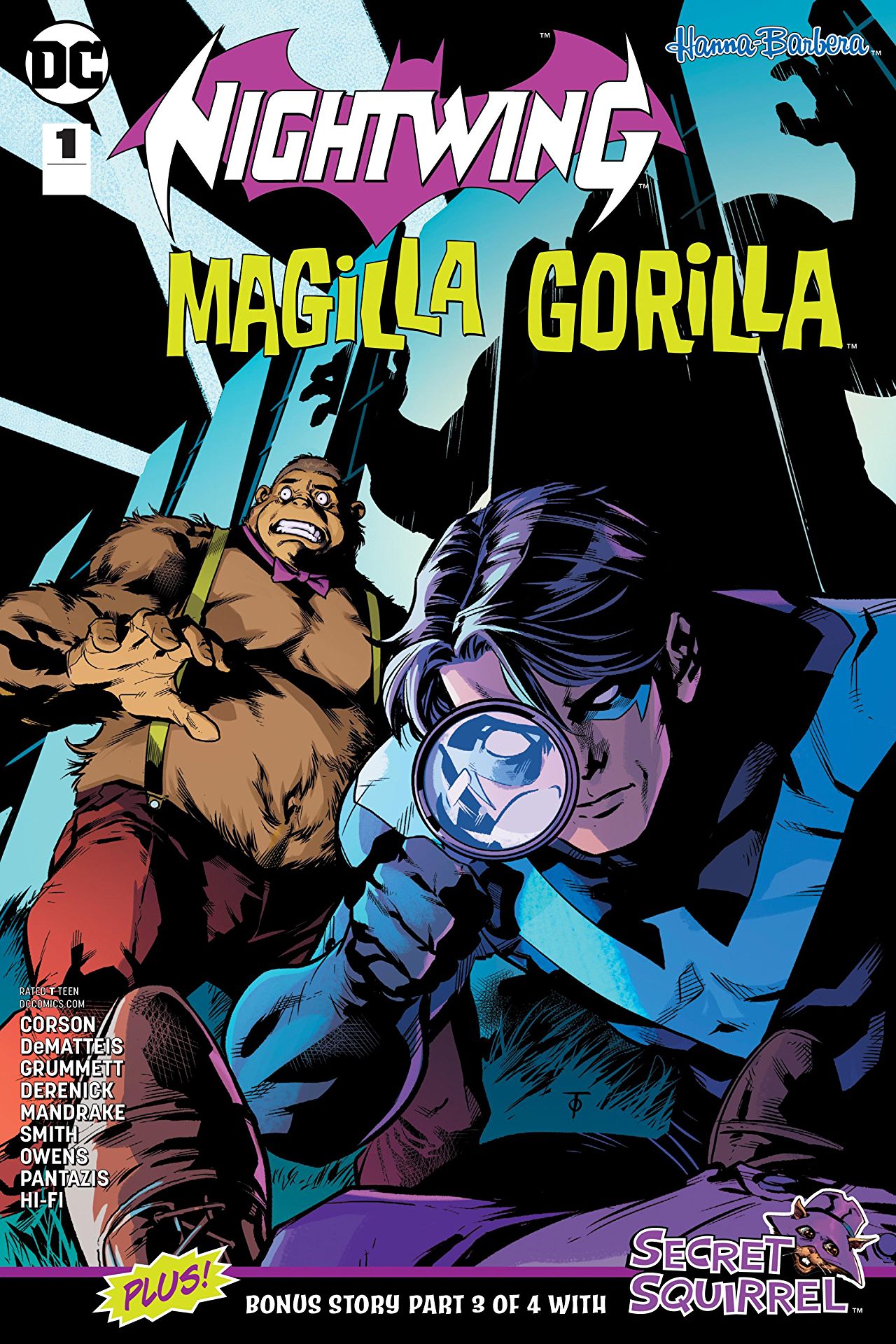 Overview: Nightwing faces a mystery in Hollywood as an offer from Magilla Gorilla brings up inner turmoil.

Synopsis (spoilers ahead): Driving through Hollywood, Dick Grayson receives calls from Mel Peebles, a high powered manager for the stars, to meet with a mysterious client and discuss a film project. Enjoying the weather and landscape, Dick is nonetheless surprised when the client turns out to be none other than Magilla Gorilla, famous film star. Magilla wants to star in a biopic of the Flying Graysons, but Dick isn’t emotionally ready to see his family on screen. Leaving, Dick hears Magilla in a rather destructive rage while Peebles attempts to calm him down.

Driving back through Hollywood, Dick remembers his family. In his hotel, he hears that Peebles has been brutally murdered, and he suits up as Nightwing to investigate. He rescues Magilla, the chief suspect, from heavily armed police, and after Magilla breaks a helicopter spotlight by leaping from the ground to the flying machine, the two head to the scene of the murder. Dick gets Barbara Gordon to run an analysis on the fibers found at the scene, as Magilla protests his innocence. Speaking of how Peebles raised Magilla and his sister Margaret and encouraged his acting career, he says they may have fought, but they were family.

They head to Magilla’s cop show set to use the real equipment used as props, confirming that the hair Dick found is from a gorilla. Magilla claims to have been with his sister Maggie, a drug addict.

The two head to consult Madame Xanadu at a secret club, whose tarot reading seems to point to Magilla. Though Nightwing starts to doubt Magilla’s story, the two save Peebles’s assistant Ophelia Gomez from some muggers, and she plays them a recording from just before Peebles’ death that throws even more suspicion on Magilla as Mel names him just before violence is heard. Magilla points out that Grape Ape also works in Hollywood, handled by Beegle Beagle, a sleazy dog. When confronted, Grape Ape easily beats Magilla for past slights, and Nightwing and Magilla barely escape.

Dick finds out that the hairs don’t match Magilla’s, and the gorilla tells Dick the story of his past with Grape – though early on a mentor, he stole a role from his protege. Magilla also reveals he knows Dick is Nightwing from his scent, then offers to take the fall for Maggie, as he believes his sister killed Peebles because of her addiction. They head off to find Maggie, but find her boyfriend Dylan fighting with Beegle Beagle, revealing that the dog framed Magilla to help Grape Ape – but without Ape’s knowledge. Ape attempts to attack Beegle, but before Dick can knock out the dog, he shoots, with Magilla leaping in front of his former friend to make amends for stealing his role.

One year later, Grape plays Dick Grayson and Magilla plays his father in the film, Dick having come to terms with his feelings about his family.

Analysis: DC once again uses the fifth Wednesday to release a series of mashups featuring their superhero characters and some of the cartoon characters their parent company also owns. This time, we see more of the Hanna-Barbera characters meeting the archetypal heroes of Gotham, Metropolis, and beyond. However, unlike the last two rounds of Looney Tunes mashups, none of the stories really stand out like Tom King and Lee Weeks’s Batman/Elmer Fudd, or Gail Simone and Inaki Miranda’s Catwoman/Tweety and Sylvester.

Writer Heath Corson tries to set up an interesting integration between the typical plot of a Magilla cartoon, where shopkeeper Peebles tries to sell Magilla to stop him from eating his bananas, and Nightwing’s typical noir mystery, but ends up with a fairly cliched Hollywood murder that doesn’t really provide many twists or particularly clever gags on either the Gorilla or Nightwing sides of the mashup. The story proves to be stretched, piling incident and sentiment without much cleverness. The appearance of Madame Xanadu is one such incident, adding nothing really valuable to the story. The final fight also shows signs of confusion, as Dick appears to knock out the villain, saying “lights out”, only for the villain to threaten everyone with a gun on the next page. This story would have fit better in twenty or twenty-two pages, rather than thirty.

The ending, showing apes and gorillas playing the Flying Graysons, doesn’t work as well as Tweety and Sylvester’s ending team-ups with Catwoman and Black Canary in Gail Simone’s mashup a few months ago. The characters haven’t received enough emotional depth to allow us to look past the absurdity of an animal retelling of one of the most poignant moments in Batman history (though no doubt any monkey/ape enthusiasts, such as our esteemed editor in chief here at The Batman Universe, will find this issue an enormous delight), as Corson leans too heavily on Hollywood cliches without a twist for characterization. Dick’s turmoil over the possibility of a film based on his childhood does present some potential, and the resolution of that conflict is genuinely touching, with Dick finding peace in his new family of Batman and Robin.

Legendary 90s Robin artist Tom Grummett provides pencils for the first ten pages, and Tom Derenick finishes the last twenty of the story. Grummett lays out some gorgeous shots of Dick in Hollywood, and sets the whimsical, semi-realistic but also anthropomorphic look of Magilla Gorilla and the rest of the animal cast. Derenick’s resolution section of the story is solid, but the pencils are noticeably looser, and the emotional impact is sadly less controlled as a result. Pete Pantazis’s colors are fun, lots of great Hollywood sunshine and neon nights. His work doesn’t stand out, but also doesn’t overdo anything, which is the mark of a solid craftsman. Marcus To provides a very appealing main cover, reminiscent of his work with Tim Seeley on the main Nightwing title two years ago, and Doc Shaner puts out a gorgeous variant.

Some have complained that the treatment of Gorilla Grape here and in the Deathstroke mashup (also published this week) contradict each other, leading to less investment in a shared universe idea – but since none of the mashups in the past have ever really put themselves in continuity with each other, the contradiction doesn’t present any real departure. After all, the closest thing to continuity the famous Elmer Fudd/Batman mashup by Tom King and Lee Weeks has is with Batman Annual #2.

In keeping with the other mashup projects DC has been releasing, this issue features a backup story, the third of a four-part serial starring Secret Squirrel written by J.M. DeMatteis and drawn by Tom Mandrake.

Final Thoughts: Though it does provide amusement and a few heartfelt moments, this mystery doesn’t really elevate the material in this mashup.