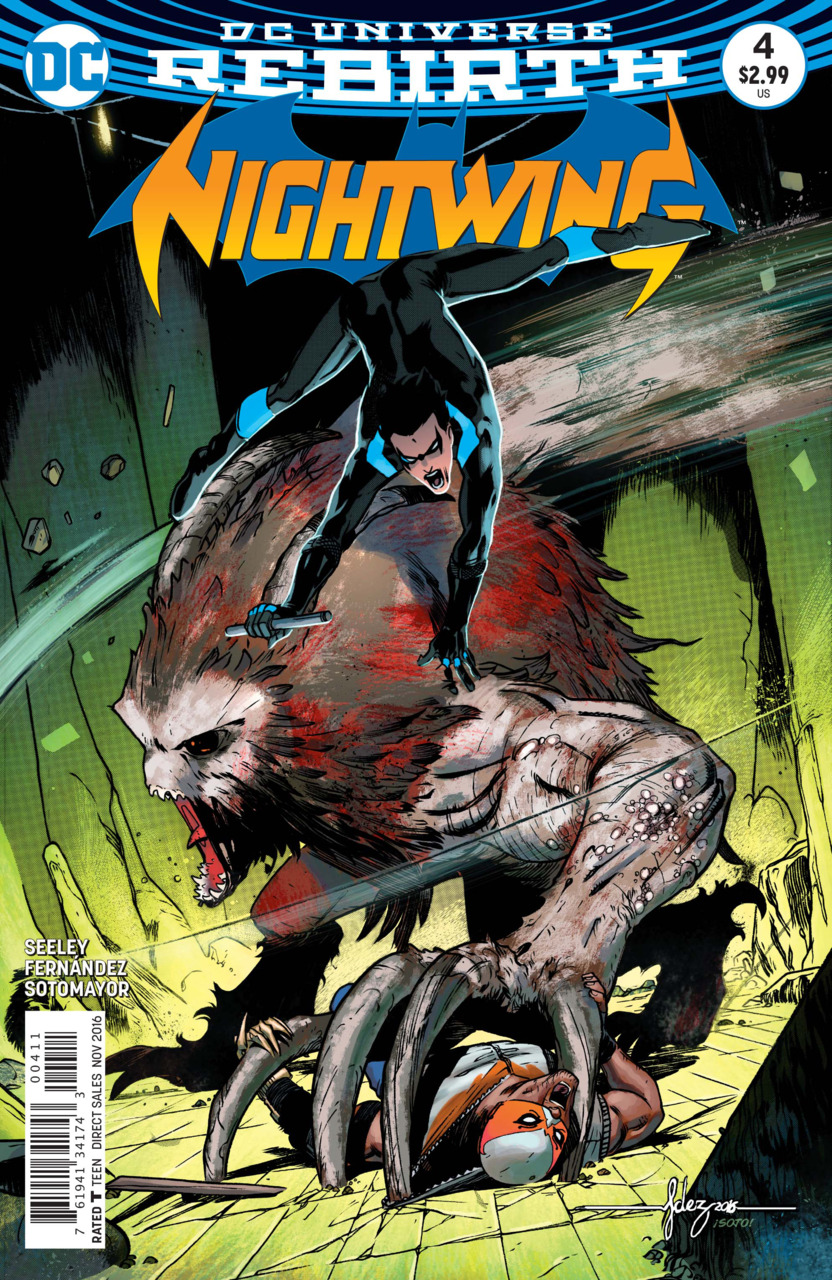 Nightwing #4 kicks with Nightwing and Raptor (who it’s becoming increasingly obvious has a kind of funky mask) in conversation with Dr. Leviticus, now free of the cage they located her in last issue. She has created The Book of Wisdom, which cures death, old age and lactose intolerance (that’s a plus), and she gives a copy to our two intrepid champions, advising them they need coins made out of electrum to access it, which the Owls prize highly, as apparently it made the first money. Which seems strange, but let’s go with it.

Cut to the Parliament Grove, a labyrinth where celebrations over this secret country built on refugees and slaves will be held.  Kind of like a bizarre flipped version of an Olympics opening ceremony. The slaves are everywhere and their very presence makes Dick Grayson uncomfortable as he has so far allowed this to happen in order to implant himself more fully into the Owls organization and gain their (easily earned) trust. Nightwing and Raptor let the slaves go but are observed and reported on – when we see the leader transform into strange, awful creature who kills the two Owls who reported the rescue!

We get a Pacman and Scorch Trials reference for the kids playing at home as Raptor and Nightwing wander the labyrinth. The bizarre creature then attacks, referencing a Moloch, which I then realized was a self-reference, and Moloch was talking about Moloch in the first person. The entire time I kept thinking of a character from the Watchmen comic and movie with the same or very similar name. Regardless, he’s truly awful. Raptor proves his worth by saving Nightwing from a looming defeated they find the center of the labyrinth.

Raptor is struggling with an injury and we get some good backstory on him, hints really, and then the two split, Raptor assisting Nightwing to get away with the Book of Wisdom replica and the coins, which Spyral seize as they rescue the slaves and refuges. Back in Gotham, Bruce and Dick have a little bit of an argument about Raptor, the usual sequence of one line “walkaways” that these two specialize in. It boils down to Batman not being so sure about this Raptor guy, a suspicion  seemingly proved founded in the last page of the comic.

Next up is the Monster Men event judging by the tags at issue end!

This is another solid issue in a solid series. There’s an amusing banter and patter to the dialogue beats which I enjoy and it meshes well with the Dick Grayson character we know and love from the past. The art is suitably moody and fits the tone of torch-lit mazes and slave cages and shadowy Parliament affairs which we’ve seen during this arc.

I enjoyed the brief interaction and spark of color when Damian greets Dick back in the Batcave at mission end – it’s somewhat a shame we only get two panels of this before Batman and Dick have to have “their talk” which is fairly play by the numbers arguing between the two – I’m hopeful we do see some Dick/Damian arcs in this Nightwing series. I would say at this point I almost crave a counter-point to the murkiness of this story so far.

A slight side-bar note would be the wrap up of the Parliament’s fate – for all their talk and bluster, they come across as an ineffectual villain once again and it will be a relief if they are not the main “Big Bad” of this Nightwing run, and this is teased as a possibility in this issue.

Regardless the tone of the books is consistent and an excellent read and I’m excited to continue along this adventure with Nightwing!