Review: Batman and the Signal #2 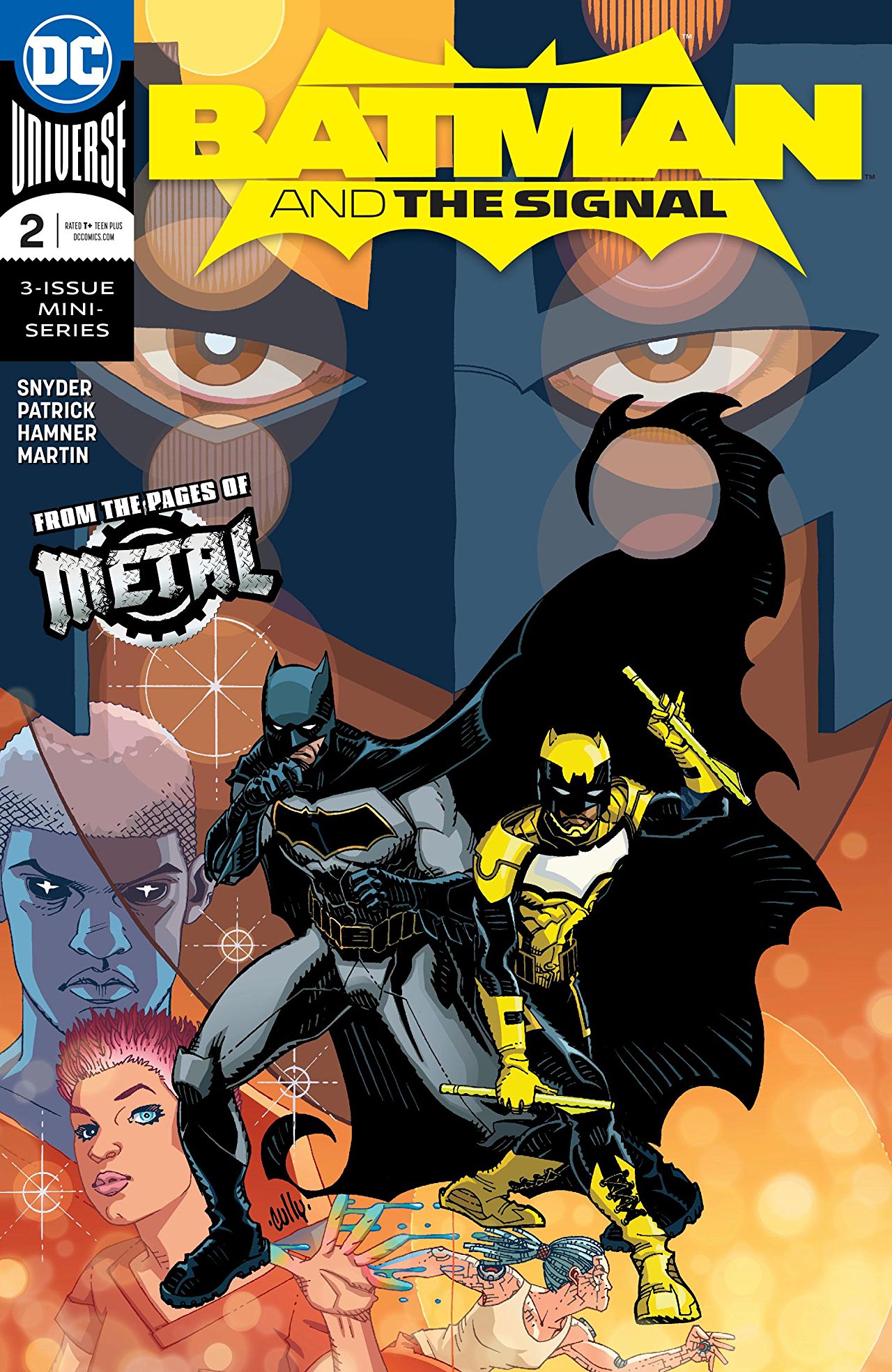 Overview: The Signal and Detective Aisi appear to have solved the mystery of the metas, but can the Signal and Batman stop whoever is behind it before their plans reach fruition?

Synopsis (spoilers ahead): The issue starts off with Duke narrating an anecdote from his past. It’s a lesson he learned from his father about how light reveals the truth in Gotham. We then jump to where we left off in the last issue, with Duke fighting three meta kids in the Arkham Juvenile Center. Duke is receiving radio backup from Izzy and Riko at the Hatch. Null orders one of the girls, Palette, to kill Duke but Palette hesitates because it is against their orders. Duke uses his powers of precognition to foil the attacks from Palette and Killjoy before Null steps up and says he will destroy Duke and take his place at the center of the Dial. Detective Aisi shows up with a couple of GCPD officers and Melvin the receptionist. A mysterious, shadowy figure at another location appears to use some form of telepathy to connect to Melvin and the metas and tells them to return to their cells. Duke senses the connection and tries to tell Aisi about it. He then makes his exit when Aisi and the officers are not paying attention.

Duke returns to the Hatch on his stealth bike only to find Riko and Izzy arguing about him when he gets back. He tells them to be more cooperative but Riko leaves claiming that Duke is still being too idealistic about his mission. Elsewhere, the mysterious figure from earlier is looking at a hologram of Duke and there are hints that he has a connection to Duke.

Detective Aisi pays a visit to the coroner’s office with the intent of examining the bodies of some other metas who had developed powers and died within the last two weeks. She runs into Duke there and allows him to examine a skin sample from one of the kids. Duke uses his powers to detect traces of a variation of Nth Metal in the tissue that is reacting to him and the atmosphere. Duke realizes that the glass from the new buildings in Gotham Proper are supercharging the photons in the sunlight that the kids are exposed to for long periods of time.

Duke heads to the Batcave to confront Bruce because Bruce is the financial backer behind all the Gotham Proper real estate development. He accuses Bruce of knowing about his metahuman potential and using him as an experiment. Bruce flatly denies this. A masked figure then appears on all the screens in the Batcave and delivers an enigmatic message to Batman and the Signal. The person shows video from various parts of the narrows where more people are violently manifesting new powers. As Batman and the Signal start to leave, the person says that Gotham really belongs to Duke.

Analysis: A large part of the appeal of this miniseries for me was the promise that we would get some answers about Duke’s powers, start to see him settle into a role in the Bat-Family and explore what Gotham might be like during the day. Two out of the three issues are now complete and we have really only seen some progress in Duke figuring out his powers and not much else. “The Dial” and Duke being at its center was one of the concepts introduced in the first issue. That concept is mentioned again in this issue, but we still have not come any closer to knowing what it means. What we do learn is that Duke’s powers and all the other meta kids are somehow connected to a strain of Nth Metal. This appears to be a revelation to Duke, but this was actually already revealed to him in Dark Days: The Casting.

A story is often only as good as its villain because the villain challenges the hero to overcome adversity and showcase their best qualities. I think the character design for this mysterious villain, from the few angles available, looks well thought out. It might be a bit too close to Duke’s costume, but I like the armored look. The problem I have is that this villain seems completely vanilla. We know nothing about this villain or his motives. He is presented as a shadowy figure, but I think it’s pretty transparent that he is Duke’s older cousin Jay as seen in the first issue. I could be wrong about that, but I’d wager a pretty significant sum of money on it if I was a betting man. It would be nice if the villain, whether it’s Jay or someone else, is shown to have some history with Duke. It would make their inevitable confrontation feel all the more meaningful.

I think the coolest part of the issue is the Hatch. I really like the idea of Duke having his own base of operations and partners he can rely on. I have to mention that Duke’s bike is very slick and seems to draw inspiration from the Bat-pod in the Dark Knight Trilogy. I have mixed emotions regarding Duke’s stealth technology. On the one hand it makes sense that he’d need some way to disappear during the daytime, but on the other hand, it also feels like too much of a cheat. And isn’t the Signal all about being in the light and not hiding in the shadows?

The art in this issue is very similar to the last issue. Perhaps I’ve adjusted to it more, but I actually found it more appealing here than last month. I think the closeup of Duke on his bike on the page with all the flashbacks to previous stories is one of the best renditions of Duke I have seen. I also appreciated small details like using his old costumes in the flashbacks. The panels featuring Duke’s eye when he is using his powers continue to be bright spots (no pun intended). The double page panel where Palette, Killjoy, and Null are attacking Duke really gave Hamner and Martin a chance to showcase some of their best work. All that being said, the art as a whole still doesn’t really appeal to me for some reason.

Final Thoughts: This mini-series is drawing close to its conclusion with many questions still unanswered and a few concepts left unexplored. Unfortunately, this miniseries seems to be turning into the kind of generic detective story we see as filler in other comic series. Hopefully, it can finish off strong.