Review: Batman and the Signal #3 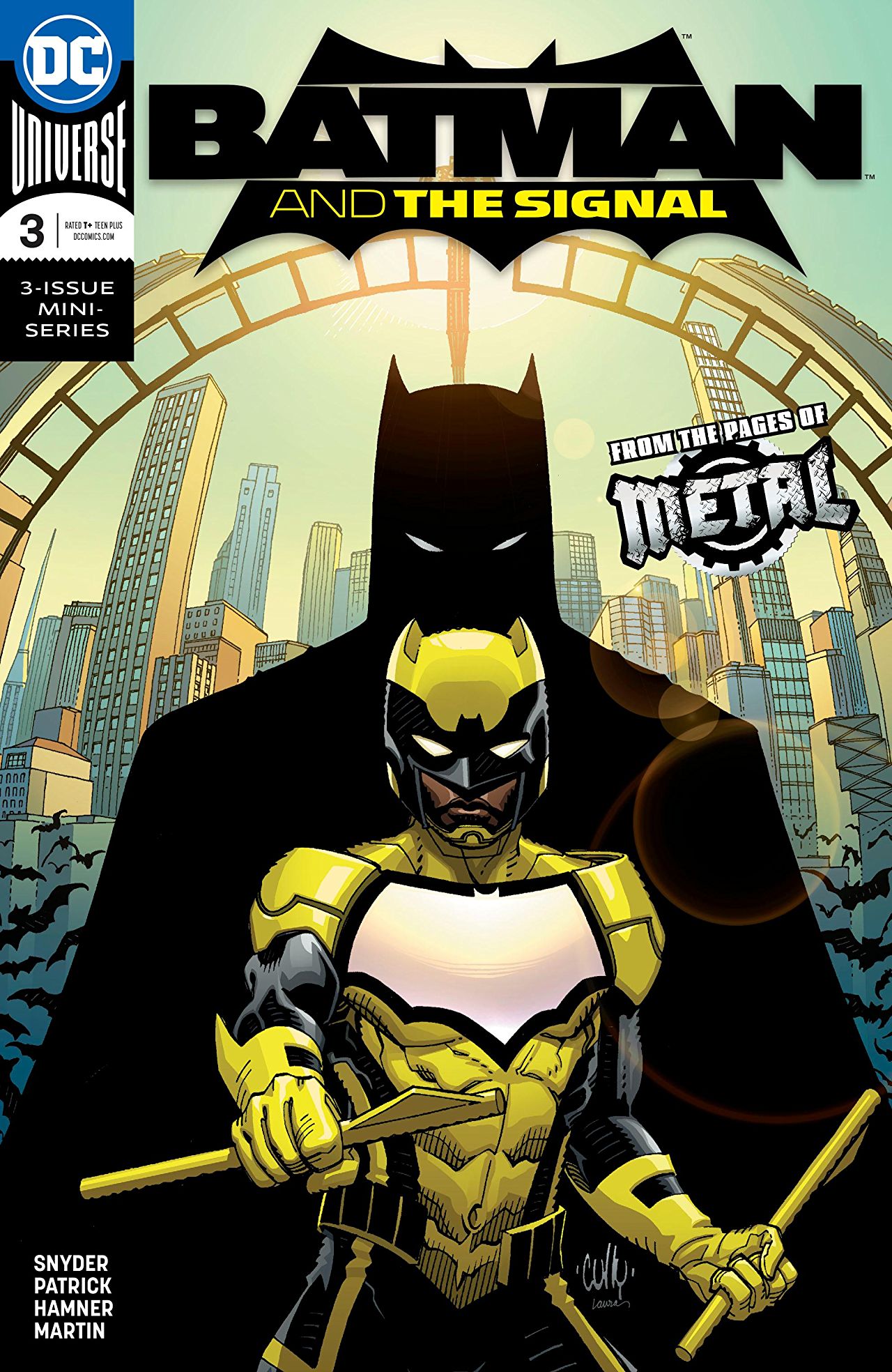 Overview: Duke discovers a startling truth about Gnomon and himself as he fights to save the Narrows from chaos.

Synopsis (spoilers ahead): The battle rages on in the Narrows as the Bat-Family is out on the streets trying to prevent people from being hurt. Batman arrives in the Batmobile and Signal is not far behind on his invisible motorcycle. They try to locate Gnomon but Signal’s powers and Batman’s tech lead them to two different possible locations. They decide to split up and cover both locations simultaneously. Signal continues asking Batman if there was some ulterior motive to Batman’s decision to select Duke for training. Batman simply states that it’s because Duke is who he is and because he’s earned it.

Meanwhile Duke’s cousin Jay wanders through the streets looking for Duke. He runs into a lizard-human meta going by Kid Cobra. Jay doesn’t back down, but Izzy and Riko take down the meta before he gets the jump on Jay. Batman arrives on the roof of the clock tower only to find a bomb in place and no Gnomon in sight. Signal gets to the base of the solar arc’s needle in Gotham Proper where he sees Detective Aisi shepherding citizens to safety. Since Detective Aisi has a residential access card for that area of the city, she is able to give Signal an easy way up to the top with the condition that she accompany him. Batman grapples away from the explosion but he can’t contact Signal because their communications are jammed so he decides it is time for “contingency plan B”.

Signal and Detective Aisi arrive at the top of the solar needle and Gnomon immediately uses his powers to make Aisi pass out. Gnomon reveals to Signal that he knows his identity and cryptically states that he is Duke’s real father. According to Gnomon, Duke’s mother was a meta who fled to Gotham while she was pregnant with Duke. When Signal tries using his powers to fight Gnomon, he is thwarted by Gnomon anticipating his move before it happens. Furthermore, Gnomon reveals that Duke’s mother used her powers to save someone the night she was a victim of the Joker’s laughing gas. Signal uses his powers to try and dismantle the generator but Gnomon says he can’t do it without dying. A revived Aisi then shoots and handcuffs Gnomon. Signal tells her to take him away while he dismantles the generator. As Aisi and Gnomon are desceding in the elevator, there’s an explosion at the top of the needle. In the commotion, Gnomon vanishes and Signal is in free fall towards the city streets.

The fall doesn’t last long before he is caught by Batman using a glider and he congratulates Signal on a good first day. Duke joins the Bat-Family foa r meal of pancakes before going off to see his Jokerized parents to ask them about Gnomon even though that proves to be a futile venture. Elsewhere, Gnomon appears to say there are other keys as he calls out to Riko. Commissioner Gordon and Detective Aisi change shifts on top of the GCPD roof and Signal is there to be briefed by Aisi on a Joker sighting in Chinatown.

Analysis: Our very short miniseries has reached its conclusion. I recommend going back to read the first two issues before reading this one as there were about two months between issues #2 and #3. Given that this mini-series was only three issues, I wonder if it would have been more prudent to simply release it all at once as a mini-graphic novel. In any case, the story here ends on a very different note from how it started. The first two issues included many mentions to a mysterious “Dial”, Duke’s relationship to it and it was hinted that he would learn more about his powers. This issue didn’t have any mention of the Dial or how it relates to Duke at all. We do get to learn a bit more about Gnomon but I still don’t fully understand his motives or why he has a vendetta against Batman.

I’ve had a perfect track record thus far making predictions in my reviews, but I have to also mention when I get one wrong. I was wrong in predicting that Gnomon was going to be Duke’s cousin Jay but it turns out that he claims to be another relative of Duke; his father. Comic book fans are likely well accustomed to the trope of a mystery villain revealing themselves to be a relative of the protagonist. To be quite honest, I’m exhausted with this trope and I think it’s played out and stale at this point. The issue also hints at Duke and Gnomon’s power being connected to something much greater than anyone foresaw. At one point Gnomon even calls his blood “immortal”. I could be wrong, but I sense the influence of Snyder here as this appears to connect to a lot of the large crossover events (Metal) he has done recently and echoes the “Joker is immortal” story right before Rebirth. The book doesn’t really get into this at all and that’s unfortunate because it was the most interesting part of the story.

I’ve said that I liked the inclusion of Aisi as Signal’s daytime version of Gordon and Izzy and Riko as Duke’s partners. Due to the series only being three issues, Izzy and Riko don’t get enough time in the story to feel like they are really a part of things in a significant way. The art in this issue might be the strongest out of all the three issues but it still doesn’t really stand out to me. That being said, I really do like Gnomon’s costume and the final page of Signal standing next to the Bat signal is great.

Final Thoughts: When I got to the end of this story, I had to ask myself, “What was the point?”. While this three-issue arc is a decent detective story, I’m not sure it does anything more than that. We don’t find out anything new about Duke except for a few hints about his connection to Gnomon which is mentioned briefly and then never fully explored. We don’t learn anything about Gnomon or why it’s so important to him to do what he is doing. He also makes a rather cliche, contrived exit from Aisi’s custody. I feel as if too much is left incomplete and unresolved at the end of this series which makes me think that there has to be more in the works for this character. I think it’s important for the roster of DC characters to be diverse, but it’s also important for those characters to be part of great stories. Hopefully, we get to see some of the loose threads from this story addressed and Duke’s character explored further very soon.