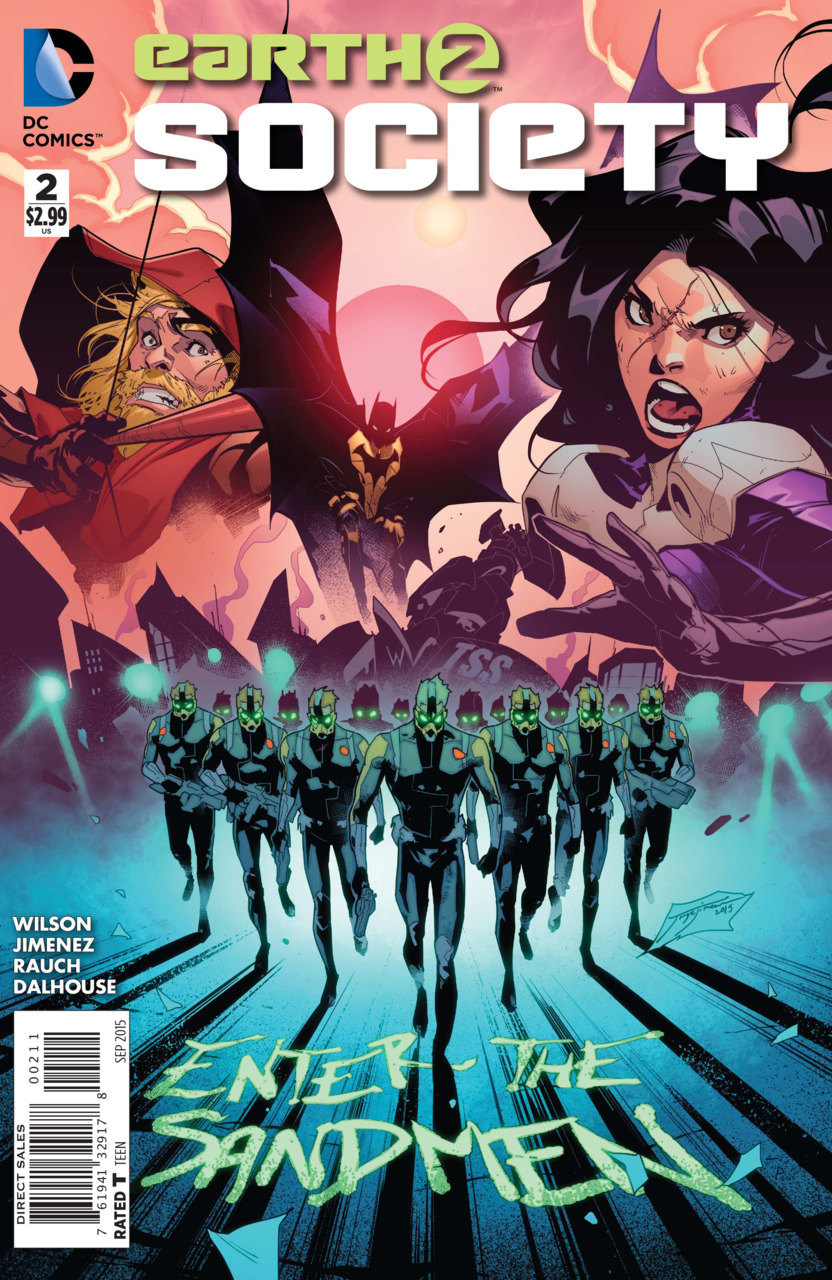 “Guardian Angel” begins with Dick Grayson the new Earth 2 Batman chasing down Terry Sloan in New Gotham. The time is one year after planet fall. Sloan’s destination is the TSS Endurance which crash landed where New Gotham was built. Sloan is able to elude Batman and go into the depths of the ship. Soon the Flash and Huntress join Batman’s position. Jimmy Olsen joins them; he knows that Sloan has gone underground. Sloan has the Source vault that Bruce Wayne created before his death. The vault has the blueprint for all of the life from Earth 2. Sloan combines the vault to his Genesis machine and begins to terraform the planet. He is obsessed with keeping the vault out of the wrong hands.

We flash back to twelve months. The Earth 2 ships are approaching the new planet where they are planning to colonize and make the new Earth 2. On board the mother ship, TSS Overwatch-One, Sloan and Commander Sato are examining the data from the new planet. It is habitable and roughly like their original home world. Suddenly Sloan picks up an attack; someone or something has breached their controls systems. Sato orders Sandman to protect Sloan, only he can fix the situation. Sloan is able to determine that the infiltration is from within and is a metahuman; there is a traitor in their group. The Sandmen are attacked by the ships security systems. Sloan tells Sato to activate the descent override which effectively crashes the fleet into the new planet. The TSS Endurance crashes where New Gotham will be built. The TSS Belgica crashes at the site of New Atlantis. The TSS Aurora crash lands at Neotropolis. Finally the TSS Erebus crashes at the site of Midwest City. None of the ships know immediately that they were brought down on purpose. The TSS Overwatch-One will remain in orbit as a watchtower for the planet. Sloan knows that he has made a lot of enemies by this action. Among them are Jimmy Olsen, the Huntress, Aquawoman, Hawkgirl, the Flash, Val-Zod, Powergirl, and The Green Lantern, Alan Scott himself.

By crashing the ships Sloan was able to secure their mainframe basically locking the saboteur out of the system. Sato also realizes that the others will hate them and suggests they reveal the reason for their actions. Sloan disagrees, they will never believe him and besides he has to do something worse. With Dodds’s help, the Sandmen are to steal the Source Vault from the Huntress on the Endurance. The Sandmen attack Huntress and Red Arrow, Ollie Queen and with their distraction, Dodds escapes with the Source Vault to bring to Sloan.

We flash forward to the original scene. Batman does not trust the others in tracking Sloan. There is an interesting exchange where Mr. Terrific asks if the exoskeleton he made for Dick is functioning. Dick just responds that he only hurts from the waist up. They realize that with Sloan’s transportation, there was no way he could make it to the Overwatch so Dick releases what looks like bats into the crashed wreckage of the Endurance to track Sloan. Sloan has connected the Source Vault to the Genesis Machine. Batman is too late to stop Sloan from activating the Source Vault and a structure starts to rise from the ground. Sloan declares himself the maker of worlds and all Batman says is “This should be fun.” Next issue The Word.

I liked this issue, but I still have a lot of unanswered question. The most blaring question is why did it take the heroes a full year to track down Sloan after the ships crashed? What is Sloan up to? From what we have seen of this character, it has been proven that he cannot be trusted and even his own allies do not trust him. Dodds is not overjoyed in helping Sloan steal the Source Vault and Sato questions the secrecy they are displaying to the others. It is good to see that there were repercussions from Convergence. Dick Grayson was paralyzed in Convergence and Telos game him the ability to walk. With Telos gone Mr. Terrific created some kind of exoskeleton that allows Dick to walk now. My final question I will address here is who this traitor is; could it be Big Barda who boarded the ship with Dick’s son?

This issue leaves me with a lot of questions that I want answered. I did feel it was slow in placed but it leaves me wanting more.