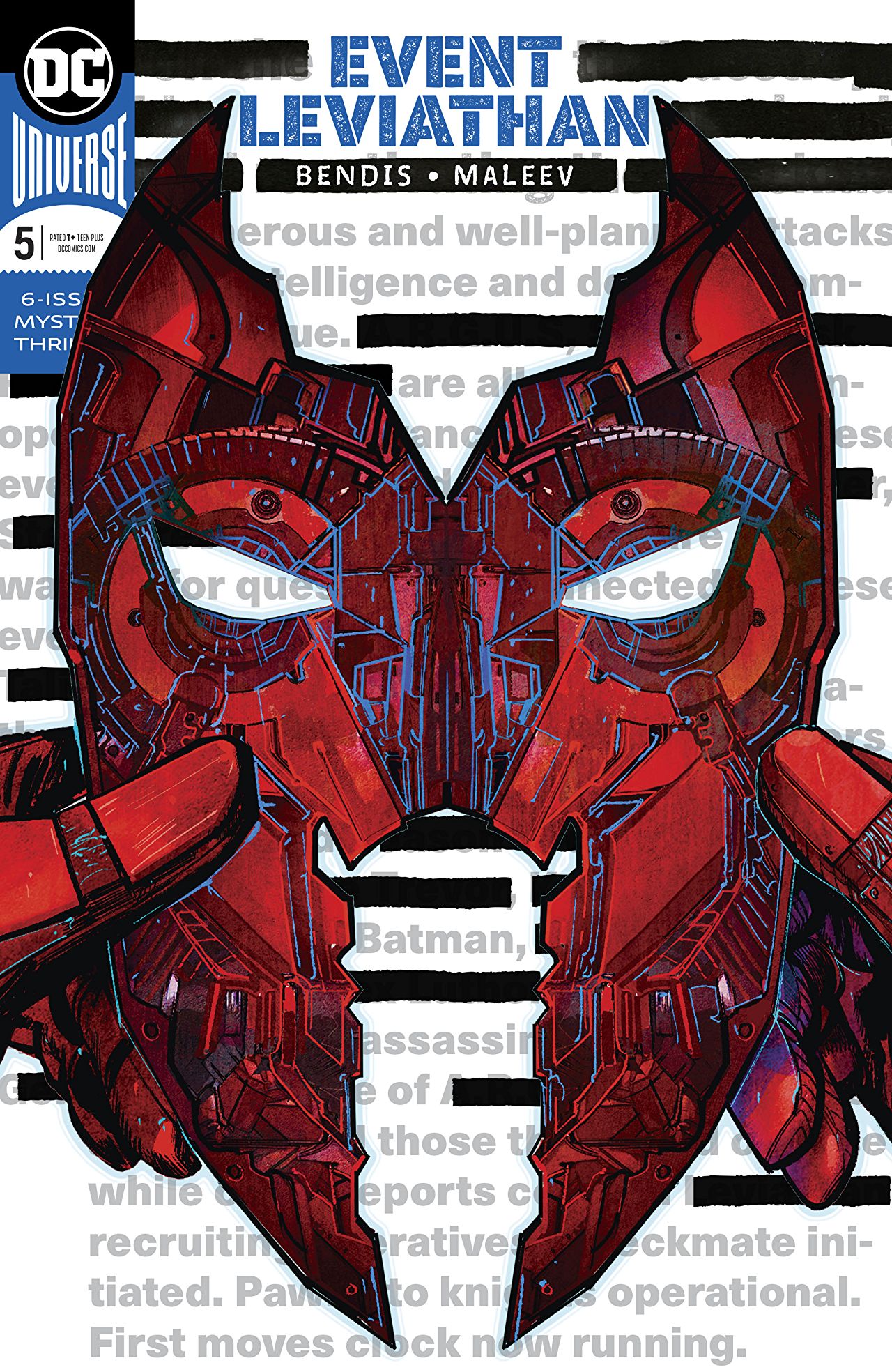 Overview: Lois uncovers tragic secrets as Batman and Superman draw ever closer to the truth.

Synopsis (spoilers ahead): A montage of Leviathan suspects opens this issue – Steve Trevor, Director Bones, Amanda Waller, Talia al Ghul, Batgirl, Max Lord, Jimmy Olsen, Ra’s al Ghul, Red Hood, and Kate Spencer, Manhunter. Lois’s second team of detectives, Elongated Man, John Constantine, Harvey Bullock, Zatanna, Deathstroke, and Renee Montoya, the second Question, clear them all of being Leviathan directly or part of the organization. The team them implicates Sam Lane, Lois’s father. Lois understandably resists this conclusion, but after failing to reach Superman, and conferring with Batman through his car (which she borrowed last issue), her team takes her to Sam’s hospital room through a magic portal. Confronting her father face to face, Lois discovers that her team is right – Sam is at least part of Leviathan’s plan. Villains begin attacking Sam’s room, and one of Leviathan’s massive blue energy surge portal devices go off. Sam tells Lois to look for the “Snowman’s Ticket,” something Deathstroke mentioned at the start of the issue,  and then, transported by Levithan’s device, appears to die.

In Chicago, Superman and Plastic Man meet with Leviathan in the sky. With his entire massive army at his back, Levithan gives his pitch once again to Superman – let Leviathan fix the world, and then Superman can protect it. Superman probes Leviathan about his mask – only for his adversary to insist that it isn’t a mask and that getting rid of all the spy agencies was to prevent any more secrets.

Back in Gotham, Batman, Robin, Green Arrow, Manhunter, and Question (Vic Sage) drive a Bat-ATV in the hopes of finding Batgirl. Robin begins questioning Manhunter about her tech, becoming suspicious of its history. As the conflict escalates, Talia al Ghul and Honor Guest, the Silencer, attack the vehicle, claiming they are going to save the world.

Analysis: After a cold opening showing Lois and her secret second detective team, and Bendis’s and Maleev’s flashy new recap page, this issue finally ditches the flashback narrative structure and powers straight through to the end. Unfortunately, some of the most interesting parts of the story – Lois setting up her second team, how she convinced them to accept Deathstroke and Harvey Bullock in the same working group, how that team found the clues they found – are ditched in favor of Lois simply learning things. The idea of a detective/spy thriller promised on the miniseries’ cover is undermined by the fact that instead of showing clue-gathering or analysis, the conclusions are just handed to the characters and reader. That being said, the improvement of the pacing makes Maleev’s art pop all the better, and the various confrontations lead to a lot of fun ideas. I almost wish Bendis had written this as a longer crossover, giving more perspective to characters who don’t see a lot of exposure these days, like Manhunter, Harvey Bullock, Silencer, Talia, Green Arrow, and several others. The character interactions provide a lot of enjoyment, even though they don’t quite capture the sense of grim dread that most of the rest of the series seems to imply appropriate.

It’s hard to figure out just what purpose this series has, other than consolidating/destroying most of the DC Universe’s spy organizations. And since this is a comic universe, those organizations will almost certainly be just as dead as any singular character, making their “deaths” a stopgap measure. The story doesn’t even seem to connect much with the main strands of Bendis’s other series and collaboration projects – the reality/crisis shenanigans of Young Justice and Lois Lane, the futuristic elements in Legion of Super Heroes and Action Comics. In the penultimate issue, Event Leviathan isn’t quite a disappointment, but it doesn’t really make the impact one might have hoped with the bright and splashy lead from Action Comics in the preceding five months.

Maleev’s main cover is actually really fun – the inside of the Leviathan mask over chess move text. Though not quite as flashy as the previous covers, it does hint at the idea of “no more secrets” and the great game of espionage found within the book.

Final Thoughts: Bendis and Maleev drive the story forward quickly, though not fleshing out some of the most interesting parts of the web they’ve woven.