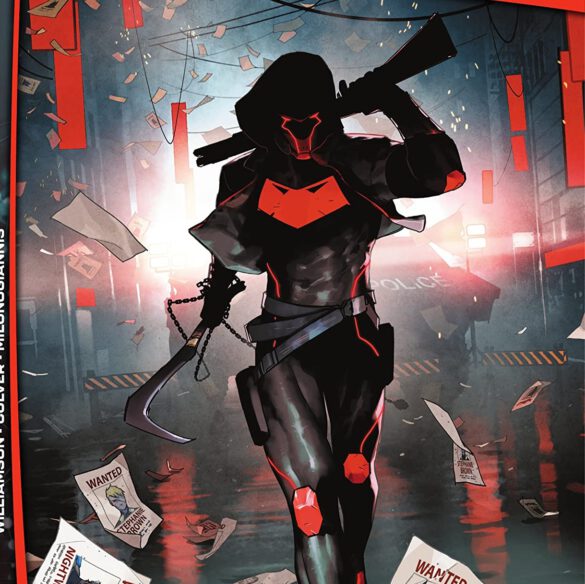 Overview: In Future State: Gotham #1, Red Hood grapples with his dual life working for and against the Magistrate, as a mysterious force has explosive plans for Gotham City in Future State.

Synopsis (spoilers ahead): A brief summary of Dark Knights: Metal flashes through the first page, with the threat that war is coming, then Red Hood bursts onto the scene, careening through the air on his motorbike, quickly taking out a gigantic Scarface and turning over an irate Wesker to the Magistrate’s force. Peacekeeper-03 rages at him for the property damage, but Jason counters Scarface attacked his neighborhood. We learn Ravager left Jason, as an enormous explosion rocks the city, and Jason and the Peacekeeper race on their bikes to stay ahead of the fault line. The explosion drops a huge part of the city into a crater in the shape of a bat, the media blaming the Next Batman (Tim “Jace” Fox). Jason argues with his voice in the dark alleyway (last seen in Future State: Dark Detective #4), about how they can take down the Magistrate, though Jason wants to make whoever blew up the city pay.

Later, Peacekeeper-03 inducts Jason into the official Magistrate forces as Peacekeeper-Red on probation. He sneaks onto the rooftops, which we learn are forbidden to him by the Bat-Family – Nightwing, Batgirl/Spoiler (Stephanie Brown), Robin (Tim Drake), and another person, possibly Duke, bearing a sword.

There is also a bonus story, “The Third Mask”, by Katsuhiro Otomo, translated by Jo Duffy, from 1996. A dark, complex tale of a villain who seems to have chosen multiple personalities, and challenges Batman to proceed further than the split between himself and Batman. It ends with Batman confronting him and saying, “I’m…NOT Batman.”

Analysis: Writer Josh Williamson and artist Giannis Milonogiannis re-team after their Red Hood backup in Dark Detective, adding co-writer Dennis Culver, to begin this cyberpunk Bat-Family tale. Picking up where they left off – Red Hood losing his relationship with Rose, but continuing his complicated relationship with the Bat-Family, the Magistrate, and other forces – and the massive explosion blowing the Bat symbol crater into Gotham provides a big narrative hook going forward. Hopefully, it will be handled better than when Dark Nights: Metal put a mountain in the middle of Gotham.

The black and white art works reasonably well, though it’s an open question whether commercial necessity (the price of paying a colorist) or artistic concerns (spinning out of Batman: Black and White) forced the choice. Milonogiannis does fine work, making the cyberpunk designs look sharp and recognizable, as well as using shadow quite well. Williamson and Culver’s writing is pretty classic neo-noir – full of loss, regret, and action. The addition of the Bat-Family on the final page provides a hook and a promise that this won’t be only a Red Hood story, but that the entirety of the Future State versions of the characters will participate in the storyline going forward.

The book also contains a pinup by Moebius – a Batman in black and white, perched on a ledge, cape hanging far below him – impressionistic, full of beautiful linework and shadow, but not specifically that Future State-specific, and some design sketches of Future State Red Hood. A bonus story from 1996 by Japanese writer/artist Katsuhiro Otomo rounds out the oversized issue – we’ll see if future issues provide such expanded page count at the same price.

As far as the covers for Future State: Gotham #1, Yasmine Putri provides the main cover, a dark, red-accented full-body portrait of Red Hood in his bleeding-tears Future State design, with Days of Future Past-style wanted poster of Nightwing, The Next Batman, and Stephanie Brown floating around his feet. Her beautiful digital painter style lends an air of solidity to the stark contrasts that almost push it to abstract design territory. James Stokoe provides the cardstock variant at a dollar more, with a gorgeous, busy picture of Gotham City being sucked into a giant molten red Bat symbol, with a black-hole style sky above. Both covers provide a gorgeous exercise in red, black, and white design, fitting for a black and white comic that focuses on black and white linework.

Spinning out of the Gotham titles of the Future State initiative at the beginning of this year, Future State: Gotham #1 provides a massive narrative hook as an unknown villain blows an enormous bat-crater into the city. Williamson, Culver, and Milonogiannis provide a dark, enjoyable look at the next chapter of the possible future of our favorite characters.