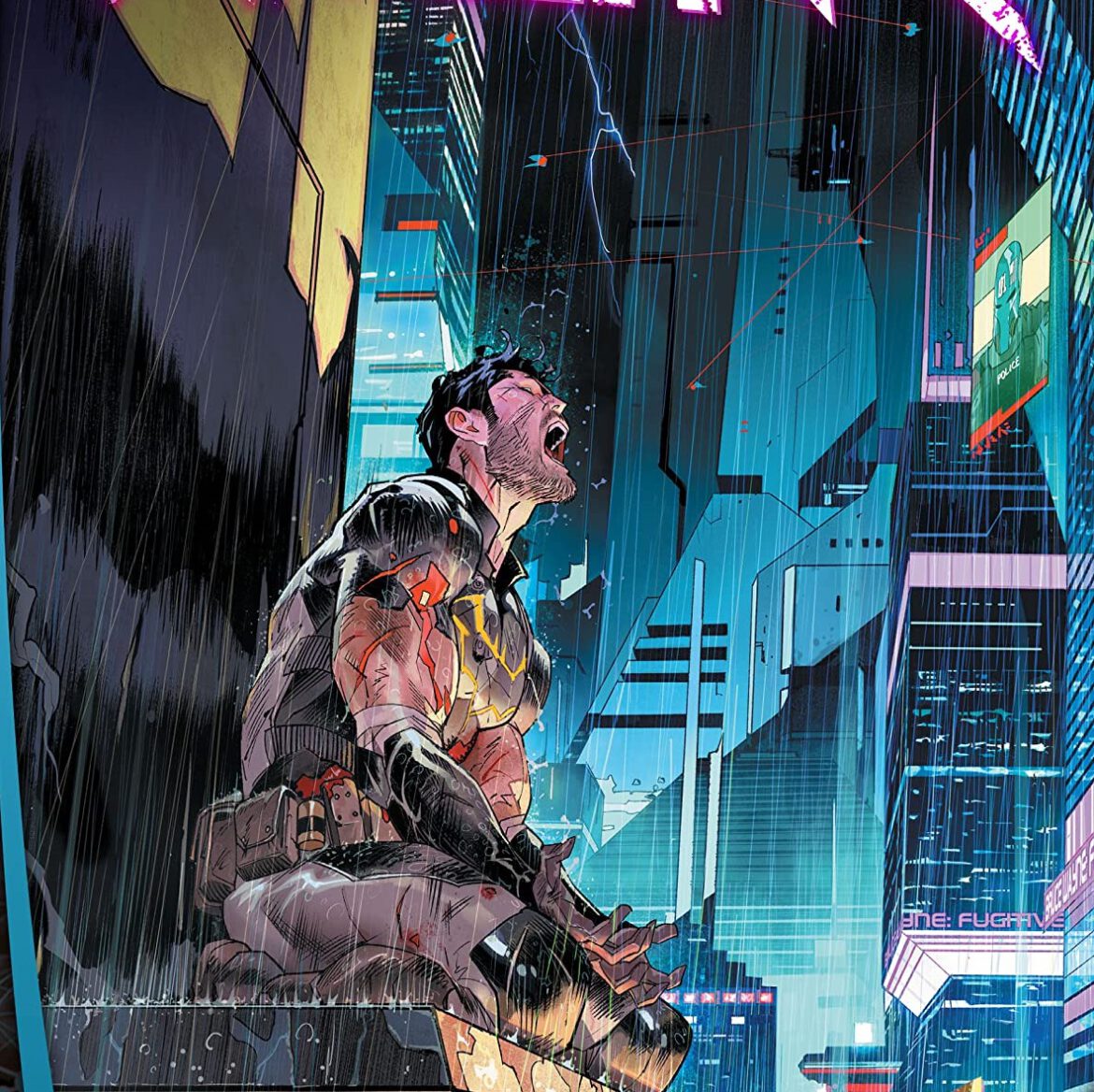 Overview: Both Batman and Bruce Wayne are believed to be killed by the Magistrate. A very much alive Bruce, however, lurks in the shadows, resolving to dismantle everything the Magistrate has built.

Synopsis: One month ago, Bruce Wayne was shot and killed in Gotham City by a Peacekeeper. Today, Bruce, cloaked in a hoodie, finds himself in a diner. News reports of Batman’s death play over holovids and a patron next to Bruce expresses concern at the deaths of both Batman and Bruce Wayne. High-profile deaths come in threes.

A month earlier, Bruce nurses a gunshot wound and pounds at the door of a back-alley clinic. He has just enough money to patch himself up and get back out on the street.

The very next day, Peacekeeper-01 announces to Gotham that Batman was killed and an investigation is ongoing into his death. The Peacekeeper promises to instill order with this new partnership between Mayor Christopher Nakano and the Magistrate.

In the present, Bruce encounters three masked criminals in an alley who are tormenting a victim. Bruce intervenes, but before he can take down the masked goons, a Magistrate drone arrives. As Bruce flees the scene, he tears his clothes off to reveal his new Batsuit.

The drones fire upon him, puncturing his ankle. Bruce ascends a skyscraper and continues his flight. He grapples to a nearby building and bounces off of it, tumbling down into an alley.

Elsewhere, Peacekeeper-01 analyzes footage from the drone cameras and sees Batman, the one he knows to be Bruce Wayne, is alive.

As Batman climbs back to his feet, he resolves to fix the technological terror the Magistrate has wrought, one that was brought about by Wayne Enterprises, Batman, and Bruce’s technology.

Analysis: Future State: Dark Detective #1 is slim on story, but it excels at creating a moody, techno nightmare world that feels heavily inspired by cyberpunk narratives like Blade Runner and Neuromancer.

The art from Dan Mora and coloring work provided by Jordie Bellaire is nothing short of phenomenal. Readers are treated to both the grungy, dirty underbelly of this futuristic nightmare Gotham, as well as the crisp, neon glow of an Orwellian Gotham. The grunge and grime feel like the remnants of a classic Gotham being buried, and in a way, they are. This old Gotham is the world of the masks, relegated to back alleys and subterranean systems. It’s where Bruce Wayne cloaks himself, hiding until he can muster the resolve to fight back and undo what he believes his efforts have ultimately created: the Magistrate.

On the flip side, the new Gotham is clean and clear. There are screens everywhere, and an array of multicolored lights create a sense of discord and disillusionment at the scope of this “improved,” more ordered world.

Batman, in this world, loses the cape and carries a more bare-bones look. He wears combat boots and a bulletproof vest with a bat symbol that looks like it was hand-painted on there. His narration is what guides us through this world, and while little seems to happen, the way that Mariko Tamaki carries us through this reimagined Gotham proves to be one of the best Future State expositions as to what’s going on and what this world has turned into. Her narration is simple, yet superbly effective, lulling us into a Noir-ish rhythm that more than matches the art.

It will be great to see where the creative team takes us in the next issue, as we clearly have a villain in Peacekeeper-01, and our “Dark Detective” is overwhelmed and lacking resources. It’s perfect grounds for a tense story.

Synopsis: Cole Cash, better known as Grifter, finds himself in a bar with a gun aimed at his head. He dispatches his would-be assailant with a knife, but before he can get a breath, two plain-clothes GCPD officers ask to have a word.

As Cole tries to shrug them off, a man at the bar overhears one of the GCPD officers say Cole’s name. This man then assaults Grifter for bailing on a job. During the fight, Cole gets thrown outside. When he pulls himself up, Cole finds himself surrounded by Magistrate officers, complete with assault mechs.

Grifter runs for it, but a car puts an end to his flight just as soon as it begins. The two plain-clothes officers show up, and Cole finally expresses a willingness to talk with them. One of the officers tells Cole that he’s a Magistrate problem now, and Grifter is handcuffed and walked into the back of a police van.

Inside the van, Cole finds himself cuffed across from Luke Fox. Luke informs Cole that the two are part of a roundup of formerly masked vigilantes. They talk about how to escape, and Cole mentions that he knows there are people out there who will escort them out of Gotham for the right price. Before Luke can react, Cole kicks Luke in the face, then kicks the door of the van to get the driver’s attention. He then tells the driver and the Magistrate officer upfront that Luke is bleeding and passed out. Not wanting Luke to choke on his own blood, the Magistrate officer riding passenger investigates.

Cole uses this moment to fight for his freedom. Cole and Luke escape and Luke offers Cole $50,000 if Cole can get Luke to safety outside of city limits. The two then head to Cole’s apartment, where he changes into Grifter and picks up some weaponry. Then they’re off to meet a contact of Grifter.

In the Narrows, Grifter and Luke are stopped by Veil and the Black Mask Syndicate. The Syndicate wants revenge on Grifter, and the two have to shoot their way out of a bad situation. In the maelstrom, Luke and Grifter make their way into an old bakery, which is exactly where they need to be. Grifter tells Luke to put his hood back on just as Huntress is about to drop in.

Analysis: This Grifter backup story stands in stark contrast to Dark Detective. It’s lighter and sillier, with Grifter cracking wise with everyone he meets. The action is frenetic in a Jason Statham movie kind of way. Unfortunately, it feels nondescript. Things happen, and Grifter and Luke Fox either talk or shoot their way through these events.

Since we’re thrust into the middle of a story, there’s no center for readers to latch on to. Instead, one feels adrift, which is exactly why this story comes across as nondescript.

The art feels much weaker in this backup when compared to the main story, which doesn’t help smooth over the stark contrast between the two. There are some notable action shots, with one of the more exciting pages focusing on three long, vertical panels of Grifter fleeing down an alley from the Black Mask Syndicate and shooting it up shortly after. It’s a neat visual, giving readers a top-down bird’s eye view of the action, but it’s too little for a story that feels like it carries on for way too many pages with way too little substance.

There is one reference in this story to Grifter working for Lucius Fox, which was seen in the pages of Batman #101. Somehow, the partnership has ended on bad terms, and there is no further explanation given. One can hope that in the next backup Grifter story, this plot point breadcrumb is further elaborated on. Doing so would add some much-needed meat to this skeletal story.

Future State: Dark Detective #1 sets up a delightfully moody, techno nightmare that feels heavily inspired by 80s cyberpunk. It excels in creating a world that ensnares and overwhelms the senses. The Grifter backup story? Not so much.