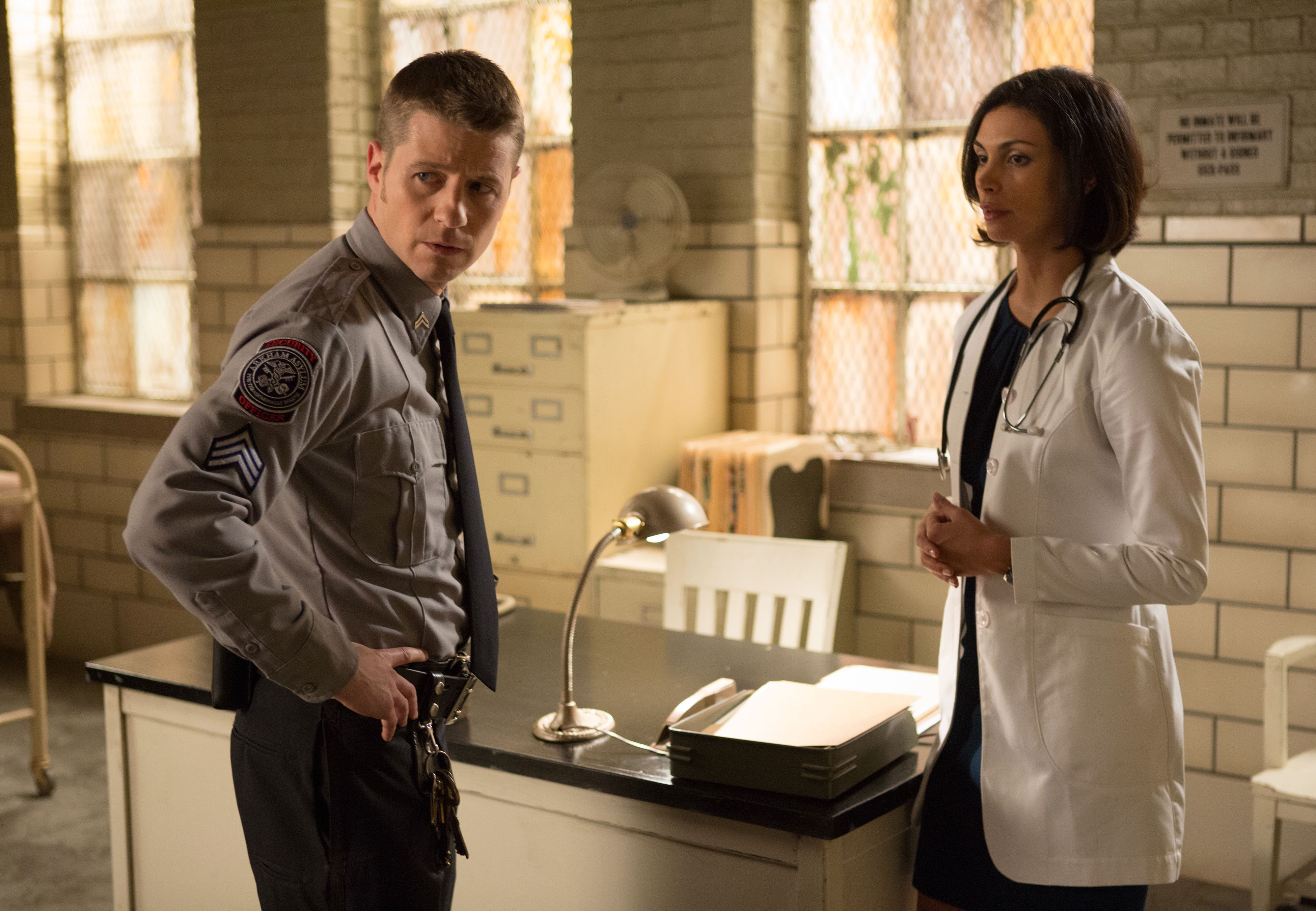 The return of Gotham opens in Arkham Asylum where Jim Gordon, on assignment at Arkham for disciplinary reasons, is supervising a play being put on by the inmates. One of the inmates, the Frogman (Mark Pettograsso), is irked by a song in the show and begins beating the soloist. Pandemonium ensues, and Gordon tries to calm the madness down. The director of Arkham Asylum, Dr. Gerry Lang (Isiah Whitlock, Jr.), blames Gordon for the incident, despite nurse Dorothy Duncan’s (Allyce Beasley) insistence the fault lies with the content of the show she chose. Leslie Thompkins (Morena Baccarin), a doctor from the female ward, is sent in to take a look at the injured inmate. She assures Gordon he will be fine and states that she admires him for not quitting.

Later Gordon discovers the Frogman in a catatonic state. After an examination by Dr. Thompkins, it is discovered that he has been subjected to intense electroshock therapy that has fried his brain. Lang once again blames Gordon and orders him to find out which inmate is responsible for the attack. During the investigation, a guard admits to Gordon that he lost his keys, and all the inmates are questioned about the missing keys. Another inmate is discovered as having been subjected to the electroshock therapy. This time, the damage to the patient’s brain is less severe. A pattern begins to form, and Gordon begins to suspect someone on the staff may be responsible. Gordon goes over Lang’s head and calls in Harvey Bullock. While Gordon stays at Arkham to look over personnel files, Bullock takes Lang to GCPD headquarters to interrogate him.

Meanwhile, Selina Kyle discovers an ill Ivy Pepper in a damp alley. She offers to get her help. In response to her refusal to go to a doctor, Selina sneaks her into Jim Gordon’s home. The apartment is empty with Barbara off with Montoya and Gordon busy investigating things at Arkham. They decide to camp out there until Ivy recovers.

Elsewhere in Gotham, Montoya informs Barbara that she believes getting back together was a mistake. They have fallen back into alcoholism and drug use, and Montoya view their relationship as toxic. Following an argument, an emotional Barbara calls Gordon’s landline. The phone is answered by Ivy Pepper, who pretends to be “a friend of Jim’s.” Barbara angrily throws down her phone after telling Ivy to “go to Hell.”

In Gotham criminal underworld, Maroni has Oswald Cobblepot thrown in jail for attempting to raise “taxes” on local fisherman. Also, Fish Mooney clashes with Saviano, another chief operative in the Falcone crime family. Both have eyes on succeeding Falcone, but Saviano views himself as the natural heir to Falcone. Fish’s right-hand man Butch Gilzean offers to speak to Saviano, his childhood friend, on Fish’s behalf. During their conversation, Saviano offers his friend a job.

“Rogue’s Gallery” highlights Gotham‘s chief problem: lack of focus. With the large amount of characters in the show, it is impossible for this show to properly focus on the show’s stars. The writers are clearly trying to make Ben McKenzie’s Jim Gordon the center of the show, but Robin Lord Taylor has been stealing the show as Oswald Cobblepot. This episode features far too little of The Penguin. The creative team needs to lean on what is working, and that is clearly Cobblepot. Gordon should be taking a backseat to Cobblepot.

Furthermore, the crowded landscape has rendered the Barbara Gordon subplot pointless. After the dramatic, but out of place, reveal at the end of “Harvey Dent” that Barbara has returned to Montoya, the next time that the writers return to this subplot is to end it in this episode. What was the point of showing them together in the first place? Undoubtedly, Gordon will eventually find out about it, but it would have been much more dramatic to have the reveal when Gordon finds out about it later.

However, there was a bright spot in this episode, the relationship between Bullock and his former partner Jim Gordon. When Gordon calls in Bullock to help out at Arkham, we see both shine. Gordon is able to investigate and follow his ever-keen instincts without restrictions from his new boss, and Bullock works over Dr. Lang and stand up for his friend, Jim Gordon.

With the investigation at Arkham taking center stage, this episode is intriguing and mostly well-written, but the crowded landscape continues to frustrate and drag down this show.